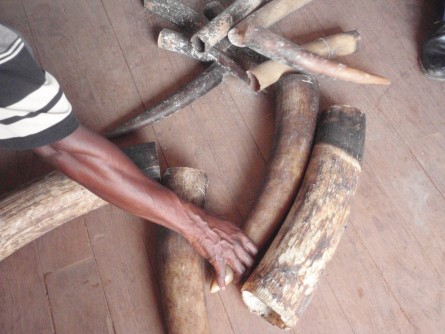 Copyright Naftali Honig, PALF - Project for the Application of Law for Fauna

Seized tusks including some from elephant babies from Pokola, Republic of Congo.

Extinction Looms for Forest ElephantsPLOS ONE study with largest dataset on forest elephants ever compiled reveals a loss of more than 60 percent in the past decadeDecline documented throughout forest elephant’s range in Cameroon, Central African Republic, Democratic Republic of Congo, Gabon, and Republic of CongoConservation scientists urge immediate measures to save the speciesElephants are being discussed at CITES meeting in Bangkok (March 3-14)

Newswise — NEW YORK (EMBARGOED UNTIL March 4, 2013, 5 PM U.S. Eastern Time) — African forest elephants are being poached out of existence. A study just published in the online journal PLOS ONE shows that across their range in central Africa, a staggering 62 percent of all forest elephants have been killed for their ivory over the past decade.

“The analysis confirms what conservationists have feared: the rapid trend towards extinction – potentially within the next decade – of the forest elephant,” says Dr. Samantha Strindberg of the Wildlife Conservation Society (WCS), one of the lead authors of the study.

“Saving the species requires a coordinated global effort in the countries where elephants occur – all along the ivory smuggling routes, and at the final destination in the Far East. We don’t have much time before elephants are gone,” says the other lead author Dr. Fiona Maisels also of WCS.

The study, which examines the largest ever amount of Central African elephant survey data, comes as 178 countries gather in Bangkok to discuss wildlife trade issues, including poaching and ivory smuggling.

The study—the largest ever conducted on the African forest elephant— includes the work of more than 60 scientists between 2002 and 2011, and an immense effort by national conservation staff who spent 91,600 person-days surveying for elephants in five countries (Cameroon, Central African Republic, the Democratic Republic of Congo, Gabon and the Republic of Congo), walking over 13,000 kilometers (more than 8,000 miles) and recording over 11,000 samples for the analysis.

The paper shows that almost a third of the land where African forest elephants were able to live 10 years ago has become too dangerous for them.

Co-author Dr. John Hart of the Lukuru Foundation says: “Historically, elephants ranged right across the forests of this vast region of over 2 million square kilometers (over 772,000 square miles), but now cower in just a quarter of that area. Although the forest cover remains, it is empty of elephants, demonstrating that this is not a habitat degradation issue. This is almost entirely due to poaching.” Recent surveys from Democratic Republic of Congo showed a major decline of elephants in the Okapi Faunal Reserve, considered the last stronghold for elephants in the region.

Results show clearly that forest elephants were increasingly uncommon in places with high human density, high infrastructure density such as roads, high hunting intensity, and poor governance as indicated by levels of corruption and absence of law enforcement.

Distinct from the African savannah elephant, the African forest elephant is slightly smaller than its better known relative and is considered by many to be a separate species. They play a vital role in maintaining the biodiversity of one of the Earth’s critical carbon sequestering tropical forests.

Prof. Lee White CBE, head of Gabon's National Parks Service says: “A rain forest without elephants is a barren place. They bring it to life, they create the trails and keep open the forest clearings other animals use; they disperse the seeds of many of the rainforest trees – elephants are forest gardeners at a vast scale. Their calls reverberate through the trees reminding us of the grandeur of primeval nature. If we do not turn the situation around quickly the future of elephants in Africa is doomed. These new results illustrate starkly just how dramatic the situation has become. Our actions over the coming decade will determine whether this iconic species survives.”

Research carried out by the CITES-MIKE program has shown that the increase in poaching levels across Africa since 2006 is strongly correlated with trends in consumer demand in the Far East, and that poaching levels are also strongly linked with governance at the national level and poverty at the local scale. This has resulted in escalating elephant massacres in areas previously thought to be safe.

“We have been carrying out surveys in the forests of Gabon for over a decade and seen an increasing number of elephant carcasses over the years” say co-authors Mr. Rostand Aba’a of the Gabon National Parks Service, and Mr. Marc Ella Akou of WWF Gabon.

President Ali Bongo Ondimba of Gabon says: “Gabon's elephants are under siege because of an illegal international market that has driven ivory prices in the region up significantly. I call upon the international community to join us in this fight. If we do not reverse the tide fast the African elephant will be exterminated.”

Dr. George Wittemyer of Save the Elephants and Colorado State University, says: “This study provides unequivocal evidence of the rapid demise of one of the planet’s most charismatic and intelligent species. The world must wake up to stem this destruction of species due to conspicuous consumption.”

Effective, rapid, multi-level action is imperative to save elephants. A drastic increase of funding, and an immediate focus on the most effective protection strategies, are essential to avoid future huge losses to the remaining elephant populations.

Dr. Stephen Blake of the Max Planck Institute, says: “Forest elephants need two things: they need adequate space in which to range normally, and they need protection. Unprotected roads, most often associated with exploitation for timber or other natural resources, push deeper and deeper into the wilderness, tolling the death knell for forest elephants. Large road-free areas must be maintained, and the roads that do exist must have effective wildlife protection plans if forest elephants are to survive.”

ZSL's West and North Africa Programme Manager Mr Chris Ransom says: “The evidence of this study, coupled with the evidence of the massive seizures of ivory seen in East and South East Asia over the last couple of years makes it clear that we must take action.”

Reducing chronic corruption and improving poor law enforcement, which facilitate poaching and trade, are crucial. It is also vital to improve control of import and sales of wildlife goods by the recipient and transit countries of illegal ivory, especially in Asia. The recipient nations, with the international community, should invest heavily in public education and outreach to inform consumers of the ramifications of the ivory trade. Although the challenge is daunting, China and other Asian countries demonstrated that strong political will can quickly and successfully modify behavior and governance, as was witnessed during the 2003 SARS threat. Similar action, focused on curbing ivory demand is key, if elephants are to survive.

Special Note To Media: To direct your readers to a petition to protect elephants, go to: http://www.wcs.org/elephantpetition