Study Advances Efforts to Screen All Children for Type I Diabetes 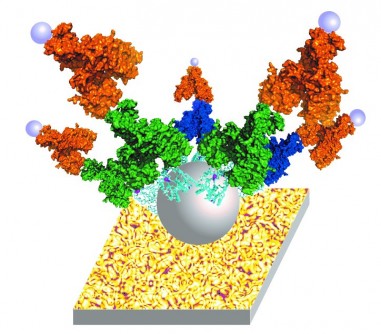 Newswise — Researchers from the Johns Hopkins University School of Medicine, Stanford University and the University of Florida report the development of a novel antibody detection technology that holds promise for improving the accuracy of diagnostic tests for type 1 diabetes in young children and making populationwide screening practical.

In a report on the work, published in the Proceedings of the National Academy of Sciences on Sept. 5, the scientists say the technology enables screening for more autoimmune antibodies implicated in type 1 diabetes than current tests by incorporating a full-length pancreatic protein, called the pancreatic zinc transport 8 (ZnT8), that is targeted for autoimmune attack in people with the disease. By improving the accuracy of this test, researchers hope to catch the disease earlier and extend testing to all people. Type I diabetes, once known as juvenile diabetes, is a relatively rare form of the disorder in which the pancreas produces no insulin. It accounts for about 5 percent of all cases of diabetes in the United States.

“Although current tests are about 94 percent accurate in detecting the antibodies years before children and young adults lose all blood sugar control, they are not accurate enough to rely upon for populationwide screening, so current antibody testing is limited to confirming diagnosis in symptomatic children and adults. Increasing the test accuracy will help expand screening for asymptomatic type 1 diabetes into the general population,” says Dax Fu, Ph.D., associate professor of physiology at the Johns Hopkins University School of Medicine. At the clinical onset of type 1 diabetes, most children and young adults develop symptoms such as fainting, exhaustion, vomiting and confusion. And by then, a large majority of pancreatic beta cells may already be lost. “Presymptomatic diagnosis will provide the benefit of beginning preventative therapies” says Fu.

Fu explains that ZnT8 has long been known as a major biomarker of type 1 diabetes, but until now it has been very difficult to efficiently incorporate the entire protein into assays because it loses its shape when removed from pancreatic cells, rendering it unrecognizable to antibodies. The new technology addresses the problem by first inserting the protein into a biomimetic membrane, similar to its natural environment in cells, and reconstituting it into its natural shape.

To create this structure, the research team needed to produce large amounts of the ZnT8 protein, and they did so by inserting a short sequence of DNA, called a plasmid, encoding the gene for ZnT8 into a protein production host derived from human embryonic kidney cells in the laboratory. The researchers then isolated the protein from the cells and inserted it into the membrane.

The researchers then tested the efficacy of the structure for detecting the autoimmune antibodies that recognize ZnT8 on a highly sensitive assay, known as a nanostructured, plasmonic near-infrared fluorescence enhancing pGOLD platform developed by a group led by Hongjie Dai, Ph.D., at Stanford University.  The group evaluated 307 human blood samples using this test, 138 from type 1 diabetes patients and 169 from healthy individuals. The test correctly identified 76 percent of the samples from type 1 diabetes patients and accurately identified 97 percent of patients without the disease, making it one of the best assays for ZnT8 autoantibodies to date. “The pGOLD-based assay demonstrates superior sensitivity and high-throughput ability with a much lower sample requirement compared to the existing clinical tests,” says Hao Wan, Ph.D., postdoctoral fellow at Stanford University and first author of the paper.

The reason for the test’s success is the structure and orientation of the protein. “Unlike other tests where ZnT8 is used only in part, the use of the lipid membrane to hold the protein in the assay allowed us to present the protein not only in its natural form, but also to control the orientation of the protein,” notes Chengfeng Merriman, Ph.D., research associate at the Johns Hopkins University School of Medicine and first author of the paper. This structure allowed researchers to expose all sides of the protein to autoimmune antibodies in patients’ blood. This maximized the sites at which the antibodies can connect with the protein and if present, indicate a positive result for type 1 diabetes.

Fu hopes the new technology will ultimately be combined with current tests to reach the critical 99 percent accuracy to begin implementing type 1 diabetes tests across the entire population. However, further research is required to improve the design before it becomes clinically available.

According to the National Institutes of Health (NIH), there are approximately 29.1 million people living with diabetes and about 18,000 children in the U.S. are diagnosed with type 1 diabetes, with diagnoses peaking around the age of 14. The disease is controllable with insulin injections, pumps and constant blood sugar testing.

However, according to the NIH, rates of type 1 diabetes diagnosis in children are increasing by 1.8 percent each year. The technology developed by this study could someday help clinicians catch the disorder earlier in life before symptoms such as sudden weight loss, extreme hunger, blurred vision and complications such as hyperglycemia, ketoacidosis and nerve damage occur.

Other researchers involved in this study include Mark Atkinson and Kieran M. McGrail of the University of Florida and Yongye Liang of the South University of Science and Technology of China.

Other researchers involved in this study include Mark Atkinson and Kieran M. McGrail of the University of Florida and Yongye Liang of the South University of Science and Technology of China.

This study was supported by the National Heart, Lung and Blood Institute (R01 HL127113-01A1), the National Institute of General Medical Sciences (5R01GM065137) and the Calbrain program.