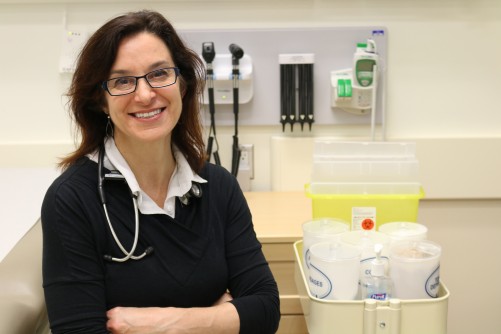 Newswise — Hamilton, ON (February 15, 2018) – A study from McMaster University suggests more can be done to improve access to and delivery of opioid dependence treatment in adult correctional facilities in Ontario.

Researchers say collaboration between the health-care and correctional systems is needed to close the gaps, and to benefit and improve the health of those in custody.

The recommendation is based on surveys completed by physicians working in more than half of Ontario’s provincial correctional facilities. The study results were published today in PLOS ONE.

“In Canada, research has consistently identified high rates of substance use disorders among people in prison,” said Lori Regenstreif, study co-author and assistant clinical professor of family medicine at McMaster.

“Evidence from Ontario, in particular, reveals that the death rate due to overdose is high in this population compared to the general public, especially at the time of release from jail.”

The study included completion of an online survey by 27 physicians, who reported working in 15 of 26 provincial correctional facilities for adults in Ontario. This included 10 of the 13 facilities with a population of more than 200.

The study identified that about half of the physicians prescribed methadone and half prescribed buprenorphine/naloxone to treat opioid dependence.

Among physicians who reported prescribing methadone in custody, all 14 reported that they continued methadone treatment if it was initiated in the community but only five (36 per cent) reported they also started patients on this treatment in the correctional facility.

The most common reasons physicians provided for not prescribing these treatments were not having an exemption to prescribe methadone, other physicians being responsible for the service in the institution, not being interested in adding this treatment to clinical work and not having adequate knowledge about these treatments.

Among the identified barriers to starting patients on these treatments while in prison were concerns about medication diversion and safety, and challenges to care continuity with community-based providers.

“While no published research in Canada has explored these issues, our findings are consistent with the limited research from the United States regarding access to treatment for opioid addiction in prisons,” said Regenstreif.

Among the suggestions from the physicians to overcome the barriers for treatment were support from institutional health care and administrative staff, adequate resources for program delivery, and access to linkage with community-based opioid treatment providers.

“Incarceration presents a unique opportunity to offer prevention and treatment to people who use substances and who may otherwise be hard to reach,” said Regenstreif.

“The World Health Organization has recommended that all prisoners with opioid use disorders have access to methadone or another related treatment.”

The researchers note opioid dependence treatment is a way to reduce harms associated with opioid use, and has been shown to positively impact treatment retention, illicit drug use, drug-related HIV risk behaviours, criminal activity and death in those with an opioid dependence.

Additional authors for this study were from St. Michael’s Hospital, the University of Toronto, Dalhousie University and the Ontario Ministry of Community Safety and Correctional Services.

There was no external funding for this study.

Note to Editors: A photo of Lori Regenstreif, study co-author and assistant clinical professor of family medicine at McMaster, is available.