Study: Some Black Teens May Feel Pulled Between Health and Hair

Cultural pressure surrounding hair is so powerful that some African-American adolescents say they avoid sweating because it could mess up their hair. 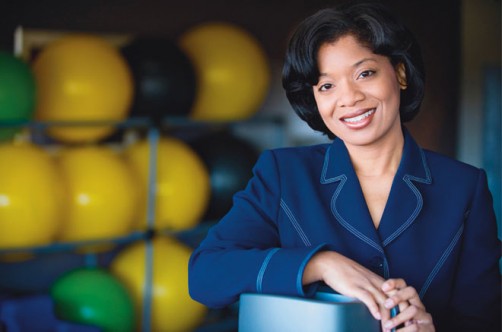 Susan Woolford, M.D., MPH, is a pediatrician at the University of Michigan’s C.S. Mott Children’s Hospital. 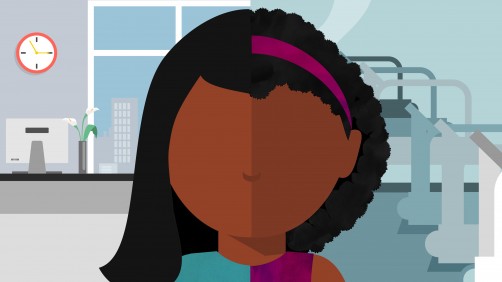 Some girls and women in the black community feel as if they have to choose between their health and their hair.

Newswise — ANN ARBOR, Mich. – As a childhood obesity expert and black woman, Susan Woolford, M.D., MPH, knows that some girls and women in the black community feel as if they have to choose between their health and their hair.

So Woolford, a pediatrician at the University of Michigan’s C.S. Mott Children’s Hospital and Child Health Evaluation and Research Unit, along with her sister Carole Woolford-Hunt, Ph.D., of Andrews University in Michigan, and David Williams, Ph.D., of Harvard University, studied this cultural phenomenon. The researchers asked: Are lower levels of physical activity among African-American teens related to hair care?

The small study, which was recently published in BMC Obesity, included 36 African-American girls ages 14 to 17 in three states. The authors found a consistent theme among participants: Adolescent girls preferred straightened hair, which was viewed as the most “attractive” style, and said they avoided getting wet or sweating during exercise because they worried it would ruin their hairstyle.

Woolford explains more about her findings below.

What is the context for the study?

Woolford: We know that African-American children and women have a disproportionately high risk of obesity compared with their Caucasian peers. Interestingly, this difference becomes more apparent as girls get older. At ages 6 to 11, the obesity rates are more similar. But by adolescence there is a marked difference (about 14 percent versus 29 percent).

It’s really important that we examine all possible factors that could contribute to this disparity. One of them is that African-American girls may not be as physically active during adolescence, and we need to ask why.

My sister and co-investigator, Dr. Woolford-Hunt, is a counseling psychologist and an expert in issues related to race and culture. We have often discussed the role that ethnic identity might play in obesity and physical activity, especially as it relates to hairstyle choices. Some people may be surprised that hairstyle concerns could potentially affect physical activity. But we got the opposite reaction from those who are familiar with this issue, such as my hairdresser who said, “Well, everyone knows that’s true. Why would you need to do a study to show that?”

What motivates the link between sweating and hair care?

Woolford: Because of cultural pressure, many black women in the U.S. go to great lengths to relax and straighten their natural hair. Many popular hairstyles require hair weaving or some form of straightening process, which can be expensive, time consuming and reversed by exposure to moisture. Frizzy sections of hair are undesirable, and it is often socially unacceptable to let natural hair emerge.

There is also a perception among some that to be accepted in mainstream America — particularly in corporate America — straighter hair is more appropriate than braided, locked or natural hair. There is also the possibility that in order to advance in some careers or to be socially accepted, having a look that mirrors the majority culture is helpful because the less “different” you are, the more comfortable others are around you. There’s sometimes a negative connotation placed on a very “ethnic” look.

Other studies have suggested that as many as 40 percent of adult black women have at one time avoided exercise because of concerns that it would ruin their hair.

What did you learn from the 36 teens in the focus groups?

Woolford: As our research team (including our research assistants Areej Sami and Natalie Blake) analyzed the data, we were struck by how consistent the message was from state to state. There were some nuances (adolescents in Georgia were more accepting of natural styles than those in Michigan and California, for example). But long, straight hair was consistently seen as most desirable.

•When concerns about hairstyles began between ages 8 and 15, participants changed from “juvenile” (natural) styles to “adult” (straightened) styles.•Participants avoided getting wet or sweating during exercise because their straightened hair became “nappy.”•Braids with extensions and natural styles were viewed as better for exercise, but not viewed as attractive.•Participants almost universally selected long, straight hairstyles as most attractive. Some thought short, natural hair was OK but that it “only looks good on some people.”

It’s important to note that while we found common themes through all focus groups, not every African-American adolescent feels this way. However, this issue does seem to be on the minds of many African-American teenage girls and warrants further exploration.

If ethnic identity or hairstyle preferences do indeed impact physical activity, maybe our interventions to address excess weight and unhealthy lifestyle preferences could be tailored around these issues. Much of my research explores the use of text messaging tools to help adolescents achieve a healthy weight, and our findings reinforce my interest in studying how we might incorporate texts tailored to this issue. For example, we could include photos of people with natural or braided hair exercising to encourage or inspire teens to do the same.Why did you study the role of ethnic identity?

Woolford: Ethnic identity has been shown to be related to lifestyle and hairstyle choices, so we measured it in this study. Something we hadn’t seen in the literature before was whether someone’s ethnic identity impacts physical activity, coupled with the idea that a stronger association with an ethnic group may make someone more comfortable with natural hair and therefore more willing to exercise.

Even in such a small sample, it was interesting to see an association between higher levels of ethnic identity and higher levels of reported physical activity. We also found an association between hairstyle choice and level of physical activity (measured by self-reported minutes of activity that increased heart rate, such as sports participation). Further studies are needed to replicate this and to explore how ethnic identity is influenced by our society and how this impacts health. 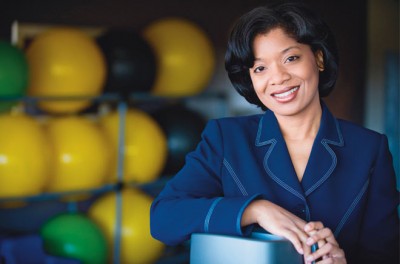 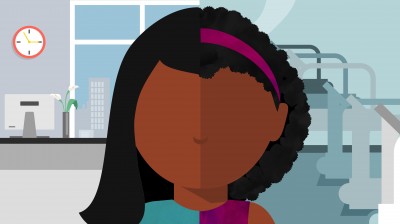 Caption: Some girls and women in the black community feel as if they have to choose between their health and their hair.