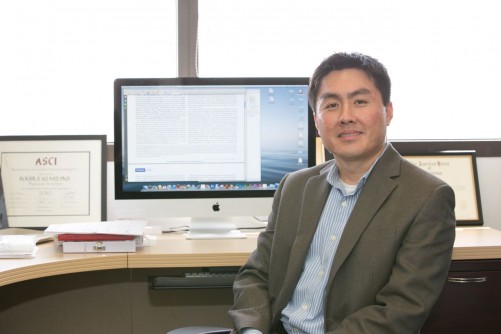 FINDINGS
A UCLA-led study of changes in gene activity in BRAF-mutated melanoma suggests these epigenomic alterations are not random but can explain how tumors are already developing resistance as they shrink in response to treatment with a powerful class of drugs called MAP kinase (MAPK)-targeted inhibitors. The discovery marks a potential milestone in the understanding of treatment-resistant melanoma and provides scientists with powerful targets for drug development and new clinical studies.

BACKGROUND
Approximately 50 percent of advanced melanoma tumors are driven to grow by the presence of BRAF mutations. The use of BRAF inhibitors, both alone and in combination with another MAPK pathway inhibitor called MEK, have shown unprecedented responses as a treatment for these types of tumors, rapidly shrinking them. However, BRAF-mutated tumors frequently show early resistance to treatment and respond only partially to BRAF inhibitors, leaving behind cancer cells that may evolve to cause eventual tumor regrowth.

The findings build upon research by Dr. Roger Lo, professor of medicine (dermatology) and molecular and medical pharmacology at the David Geffen School of Medicine, and lead author of the new study. Previously, he discovered that epigenomic alterations (via a regulatory mechanism called CpG methylation) accounted for a wide range of altered gene activities and behaviors in BRAF-mutant therapy-resistant melanoma tumor cells. The loss of tumor-fighting immune or T-cells in drug-resistant tumors may lead to resistance to subsequent salvage immunotherapy, Lo said, and drug resistance can grow at the same time that anti-tumor immune cells diminish and weaken.

This means that in some patients the melanoma might develop resistance to both MAP kinase-targeted therapy and anti-PD-L1 antibodies, which capitalize on the abundance of immune cells inside the tumor to unleash their anti-cancer activities. Lo concluded that non-genomic, epigenomic, and immunologic evolution of melanoma explain why patients relapse on MAPK-targeted therapies.

Along with co-first authors, Drs. Chunying Song, Marco Piva and Lu Sun, Lo hypothesized that epigenomic and immunologic resistance evident during clinical relapse may be developing already during the first few weeks of therapy as the tumors shrink and clinical responses are viewed as successes. If this proves to be true, then scientists could potentially identify combination treatments that suppress the earliest resistance-promoting activities.

METHOD
Lo’s team utilized state-of-the-art technologies to comprehensively profile recurrent patterns of gene activity changes. They analyzed 46 samples of patients' melanoma tumors, both before and early during MAPK therapy. They also replicated the process outside of the human body, modeling both non-genomic drug resistance by growing melanoma cell lines from patients' tumors and immunologic resistance in mouse melanoma. Patient-derived cell lines and mouse melanoma tumors were treated with drugs that block the MAP kinase pathway and sampled at various times over the course of the study to track gene activity changes.

The researchers found that MAPK therapies fostered CpG methylation and gene activity reprogramming of tumors. This reduced the tumor cells’ dependence on the mutated BRAF protein, and switched their growth and survival strategies to rely on proteins called receptor-tyrosine kinases and PD-L2. In addition, PD-L2 gene activity was found to be turned on in immune cells surrounding the tumor cells. They also demonstrated that blocking PD-L2 with an antibody could prevent the loss of T-cells in the tumor’s immune microenvironment and suppressing therapy resistance.

Lo’s team continues to identify other adaptations during this early phase of therapy that could be targets of future combination treatment regiments.

IMPACT
More than 87,000 new cases of melanoma will be diagnosed this year in the United States alone, and more than 9,500 people are expected to die of the disease.

The findings can prompt drug development and new clinical studies based on epigenetic or gene expression and immune targets in combination with mutation-targeted therapies. As scientists learn what these mechanisms of tumor resistance are, they can combine inhibitor drugs that block multiple resistance routes and eventually make the tumors shrink for much longer or go away completely, Lo said.

JOURNAL
The research is published online in Cancer Discovery, the peer-reviewed journal of the American Association of Cancer Research.