Much research in the field of astrobiology—the study of life in the universe—focuses on the habitability of extraterrestrial environments in our solar system and beyond. NASA’s Planetary Science and Technology from Analog Research (PSTAR) program sponsors research exploring the Earth’s extreme environments to develop a sound basis for conducting astrobiological research on other solar system bodies. By identifying, exploring and characterizing terrestrial environments for habitability and biosignatures, scientists can better predict what future exploration missions may encounter on other planets.

Planetary scientist Christopher Edwards from Northern Arizona University was recently awarded a $1.2 million grant from PSTAR to understand the habitability of Mars by studying extreme, Mars-like environments on Earth. As principal investigator, Edwards will lead a team of NAU graduate students and scientists from the U.S. Geological Survey Astrogeology Science Center, Stony Brook University, the University of New Mexico and NASA’s Jet Propulsion Laboratory to study several field sites in California’s Mojave Desert, one of the hottest, driest places on the continent. Edwards selected these sites for the study—including sedimentary deposits and several seasonally dry lakes—because they represent thermophysical conditions comparable to potentially habitable environments on Mars.

One of the most important Mars discoveries in recent years is the existence of recurring slope lineae (RSL), dark and narrow features emerging from steep, rocky exposures that may signal the presence of water. Edwards is a leading expert on RSL, and this three-year project is designed to provide the technical and scientific basis for determining soil moisture content of RSL based on thermophysical data gathered through remote sensing technologies. In this field campaign, Edwards and his team will use a variety of ground-based measurements and sophisticated instruments mounted on unmanned aerial vehicles to simulate data like that acquired of Martian RSL from previous NASA missions.

“RSL are perhaps the most compelling evidence for present-day liquid water on Mars, and they have driven a significant re-evaluation of the ways in which liquid water and habitability in extreme environments could exist on Mars,” Edwards said. “By conducting detailed fieldwork at these sites using sophisticated numerical models, airborne remote sensing technologies and detailed ground-based in situ measurements, we will create a quantitative representation of the surfaces, similar to those found on Mars and other planetary bodies.

“The project has significant implications for Mars exploration and, more specifically, for instrumentation scientists choose in the future to assess the moisture content of soils, presence of permafrost and/or degree of rock cementation on planetary bodies.”

An assistant professor in the Department of Physics and Astronomy, Edwards’ research focuses on the composition, physical properties and processes and morphology of planetary surfaces, with an emphasis on rocky bodies, including the Earth. A major element of his research has been the design and development of infrared remote sensing instruments for use in space, the laboratory and for fieldwork. His research uses infrared spectroscopy, radiometry, laboratory spectroscopic measurements, geologic field observations and numerical modeling, and has taken him to field sites in the western United States, Yellowstone National Park, Hawaii and Spain, as well as the Himalayan mountains in Bhutan. 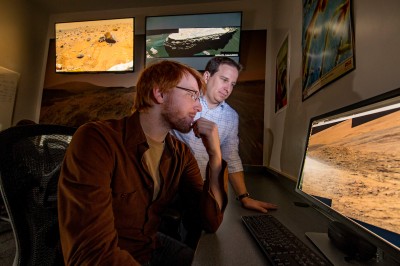 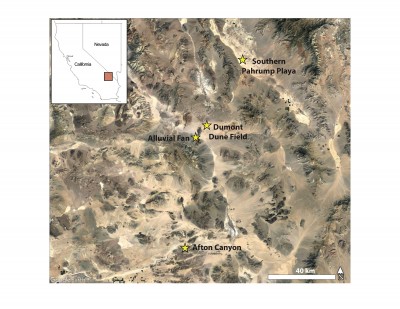