Sustainable Forest Management--What We Say and What We Do 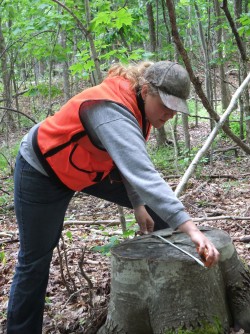 A member of the Michigan Tech research team measures the stump of a tree cut in a northern hardwood forest.

There’s a system in place for assuring the productivity of northern hardwood forests. It’s called the selection silviculture system, a method of using partial harvests done to a strict formula to sustainably manage the trees. It’s been around centuries, and it works.

There’s only one problem.

A study by Michigan Technological University researchers found that the system generally isn’t being used.

“This could be because nobody ever really used it, or because it isn’t used anymore, or because it’s too much trouble to use it strictly as it was designed,” says Robert Froese, associate professor at Michigan Tech’s School of Forest Resources and Environmental Science.

“If that’s true, then we should stop acting like the system is commonly used,” Froese observes. “Also, if true, we should consider what the implications are for the wide range of values that our forests provide. If harvests are too gentle, then it’s likely that there isn’t enough light reaching the forest floor to ensure regeneration. Over time, that will lead to forests that look quite different from the old-growth northern hardwood forests that are considered self-sustaining.”

In 1957, a research forester named Carl Arbogast wrote a guide for the selection system for managing northern hardwoods. The guide has become the core of northern hardwood silviculture, particularly in the Great Lakes region.

Froese and his colleagues set out to discover whether Arbogast’s selection system is widely applied in the Great Lakes northern hardwood forests.

They studied recent timber harvests on state forest lands, forests under corporate ownership and privately owned forests. They measured the trees in 10 randomly located circular plots under all three kinds of ownership, and measured stumps to reconstruct what the stands looked like before the harvest. Then they relocated and enlarged the plots, analyzing them in 2010 and 2011.

What they actually found surprised them. Only 22 of 96 stands of trees studied were harvested in compliance with the guidelines that have been shown to create a balanced and sustainable structure that assures the future productive potential of the forests. The other 74 stands were being overcut or undercut.

Overcutting ultimately results in diminished yield and quality of the wood, but the effects of undercutting are subtler. Undercutting could mean that an opportunity was missed to harvest more wood without harming the forest. There could also be an ecological cost. For seedlings to survive and grow in northern hardwoods, there must be gaps big enough to allow light to reach the forest floor. Without enough light, seedlings might not establish and thrive.

Another surprise: The variation within forests owned by each type of landowner was much more substantial than the variation between kinds of landowners. “There are no significant differences among the three landowner types compared,” says Froese.

What does the scientist recommend? “Improved education for private landowners and accountability for public managers would help ensure the future productivity of the northern hardwood resource,” says Froese. “We need to understand why Arbogast isn’t being followed even though people think it is, and we need to realize the economic, social and economic consequences of not following the selection silviculture system.”