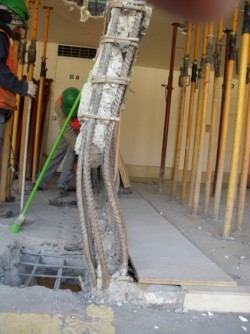 Buckled wall at first story of a 15-story building following the Mw 8.8 Maule earthquake in central Chile in 2010.

Newswise — Structural walls have proved to be an effective system for protecting buildings from strong earthquakes, and their design and use over the past decades has evolved into thinner and heavily stressed cross sections. Presented are the main results of a theoretical and numerical analyses conducted on axially loaded prismatic members to evaluate the onset of global instability under tension/compression load cycles. A buckling theory suitable for hand calculations is introduced and evaluated using data available from tests conducted on columns. Computer simulations are used to numerically simulate the tests and study the influence of nonuniform strain profiles along the height of the member in the onset of out-of-plane buckling.

More recently, however, after two earthquakes of significant magnitude––one in Chile (2010) and the other in New Zealand (2011)––prevailing practices in many countries changed to favor rectangular sections without enlarged boundaries. Following the Mw 8.8 Maule Earthquake in central Chile in 2010, out-of-plane buckling of slender walls was reported in two buildings (Figure 1). Damage associated with out-of-plane deformation of structural wall boundaries was also observed following the Mw 6.3 New Zealand Earthquake in 2011. These observations created a renewed interest and research in the practical aspects of inelastic buckling of slender structural walls.

In the past, researchers proposed theoretical models for buckling of prismatic columns under uniform tension/compression cycles, where the key parameter is the maximum tensile strain prior buckling during load reversal. These models have shown good accuracy in comparison with experimental and analytical studies conducted on cyclically loaded columns under constant axial force.

Analysis of slender walls, however, requires the consideration of other aspects that influence the response. Because walls have strain gradients along their length and height, both effects must be considered for a more accurate estimation of the onset of out-of-plane instability. Although in some cases, the assumption of uniform axial strain along the wall height is reasonable, in the more general case this assumption leads to an underestimation of the maximum tensile strain required to buckle the wall during load reversal.  This results in an overestimation of the minimum wall thickness required for design to prevent buckling from occurring.

Results of the analyses conducted on the members to evaluate the onset of global instability under tension/compression load showed that the onset of buckling can be identified using either the proposed buckling theory or computer simulations. Furthermore, buckling is affected by gradients of axial load or strain along the length of the member. Design recommendations are made to inhibit global wall buckling during strong earthquakes.

The research can be found in a paper titled “Stability of Slender Wall Boundaries Subjected to Earthquake Loading,” published by ACI Structural Journal.