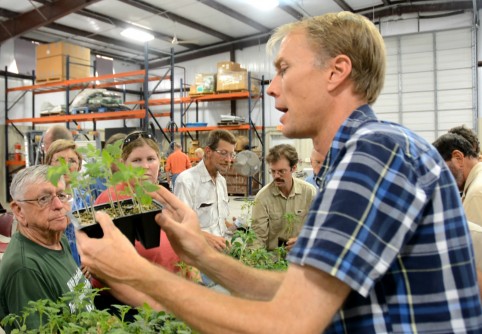 Newswise — Want a slice on a burger? Fine. Chopped into a salad? Great. Pureed and slathered over a pizza crust? Yum. Steeped in a winter stew? Ahhhh.

But fresh is what most consumers covet, and that’s what Dr. Kevin Crosby, Texas A&M AgriLife vegetable breeder in College Station, had in mind when he released a new variety called Hot-TY.

“It’s very heat tolerant, so if you plant it now from San Antonio to College Station south, it will start flowering within a month,” Crosby said. “And you can harvest from late October until after Thanksgiving or until there is a frost.”

The fresh frenzy is tempting Texas tomato growers statewide, serving up potential for the industry to recoup some of its steady decline over the past 50 years, Crosby believes.

In 1960, Texas growers harvested 28,500 acres of tomatoes valued at almost $7.7 million, according to the National Agricultural Statistics Service. Only an estimated 300 acres are grown in Texas now for commercial canning, Crosby said. But last year, Texas fresh tomato yields from about 900 acres were valued at almost $4.9 million.

Here’s the catch, according to Crosby: Tomatoes are coming back for the small-scale and backyard farmers and organic growers, not large-scale commercial growers. And they are selling to grocery stores and farmers’ markets for consumers who want fresh, vine-ripe tomatoes.

“It’s growing in those areas because the value of the crop is very high in that sector, especially around metropolitan areas,” he said.

That can be seen when adjusting the 1960 price for inflation to 2016. Tomatoes in 1960 sold for $5.27 per hundredweight which would equal $42.09 in 2015, the latest year for which production figures are available. But the price per hundredweight in 2015 was about $60, almost 40 percent higher than what farmers were receiving more than 50 years ago when adjusted for inflation.

Crosby noted that vine ripe, organic tomatoes can gross $50,000 per acre these days.

Interest was obvious recently when Crosby invited Texas tomato enthusiasts – be they commercial, niche or backyard growers – to a workshop to learn the most recent tips for producing the high-dollar fruit. Crosby said that in working on a joint tomato project with the Texas Department of Agriculture, he found growers had lots of questions. More than 50 growers came to learn about the new variety, how to graft onto rootstock, what diseases are on the horizon, how to combat them and what researchers are finding about the human health aspects of tomatoes.

“Flavor and quality – that’s what people want in a vine-ripe tomato,” Crosby said. “Maybe that kind of tomato is less than 10 percent of the market, but it’s very lucrative. So theoretically, though the acreage may be less than 1,000 acres, I guarantee you they’re making a lot more per acre than when there were 40,000 acres.

“And there is a lot of interest in not just quality but in better farming practices when you’re making a profit. There is no question tomatoes are one of the healthiest vegetables, and we consume a lot of them. They deliver a lot of nutrients and minerals and are important to a lot of cuisines, so it helps that you can add that to your diet and benefit from it.”

Among the most recent research on the health aspects of tomatoes is the potential to prevent prostate cancer, according to Dr. Bhimu Patil, director of the Vegetable and Fruit Improvement Center at Texas A&M.

“Some vegetables might be slightly higher in levels of phytochemicals, but you may not like them as much,” Crosby said. “Think about mustard greens. I mean, they are very nutritious, but I think people like tomatoes better.”