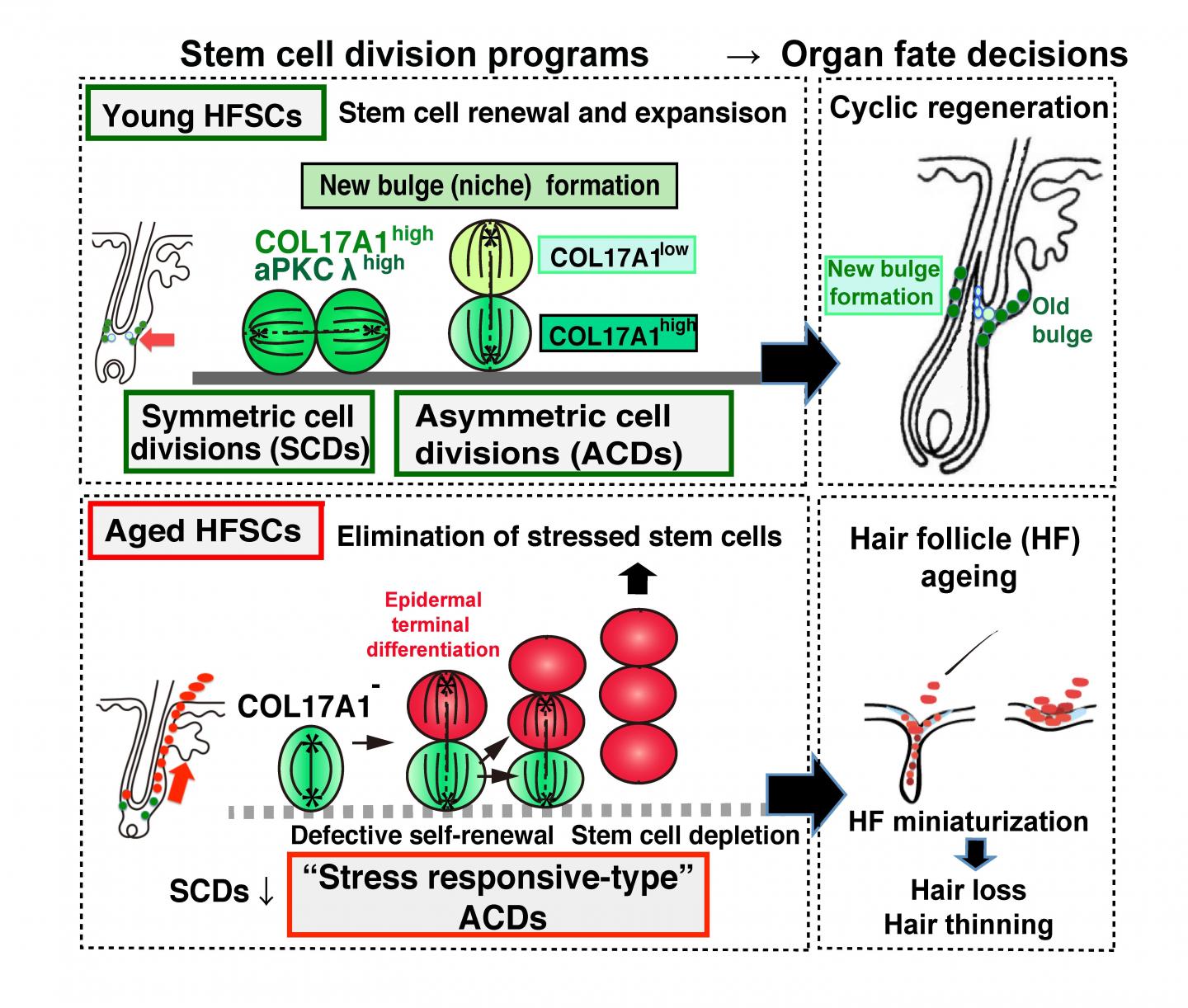 Newswise — Tokyo, Japan - Hair grows from stem cells residing in hair follicles. During aging, the capability of hair follicles to grow hair is successively lost, leading to hair thinning and ultimately hair loss. In a new study, researchers from Tokyo Medical and Dental University (TMDU) and the University of Tokyo identified a novel mechanism by which hair follicles lose their regenerative capabilities.

Hair follicles are mini-organs from which new hair constantly grows. The basis for new hair growth is the proper function of hair follicle stem cells (HFSCs). HFSCs undergo cyclic symmetric and asymmetric cell divisions (SCDs and ACDs). SCDs generate two identical cells that go on to have the same fate, while ACDs generate a differentiating cell and a self-renewing stem cell. The combination ensures that the stem cell population continues to exist, yet how those contribute to the loss of HFSC function due to aging is not yet completely understood.

"For proper tissue function, symmetric and asymmetric cell divisions have to be in balance," says corresponding author of the study Emi Nishimura. "Once stem cells preferentially undergo one of either or, worse yet, deviate from the typical process of either type of cell division, the organ suffers. In this study, we wanted to understand how stem cell division plays into hair grows during aging."

To achieve their goal, the researchers investigated stem cell division in HFSCs in young and aged mice by employing two different types of assays: Cell fate tracing and cell division axis analyses. In the former, HFSCs were marked with a fluorescent protein so they could be followed over time, while in the latter the angle of HFSC division was measured. Strikingly, the researchers were able to show that while HFSCs in young mice underwent typical symmetric and asymmetric cell divisions to regenerate hair follicles, during aging they adopted an atypical senescent type of asymmetric cell division.

But why does the mode of cell division change so drastically during aging? To answer this question, the researchers focused on hemidesmosomes, a class of protein that connect the cells to the extracellular matrix (ECM; proteins surrounding cells). Cell-ECM have long been known to confer polarity to cells, i.e., that the cells can sense their localization within a given space through the action of specific proteins. The researchers found that during aging both hemidesmosomal and cell polarity proteins become destabilized, resulting in the generation of aberrantly differentiating cells during division of HFSCs. As a result, HFSCs become exhausted and lost (leading to hair thinning and hair loss) over time.

"These are striking results that show how hair follicles lose their ability to regenerate hair over time," says first author of the study Hiroyuki Matsumura. "Our results may contribute to the development of new approaches to regulate organ aging and aging-associated diseases."