The discovery of the endocannabinoid system: Centuries in the making

Newswise — For more insight into the history of cannabinoid and endocannabinoid research, listen to an interview with Raphael Mechoulam and Mier Bialer, recorded at the 13th European Congress on Epileptology in August 2018.

Recently, cannabis has experienced a resurgence of interest. Two countries—Uruguay and Canada—have legalized it. In the United States, 33 states and the District of Columbia now allow at least its medical use. In the field of epilepsy, there have been more than 150 years of anecdotes about the plant’s anti-seizure effects. Recent trials of cannabidiol (CBD)—a molecule found in the cannabis plant—led to the U.S. Food and Drug Administration’s approval of Epidiolex to treat seizures in Dravet Syndrome and Lennox-Gastaut Syndrome.

Once associated with criminals and decried as dangerous, cannabis has taken scientists on a journey to a better understanding of the human body, revealing a biological system now thought to be involved in modulating everything from pain sensation to reproduction to appetite.

A tale as old as time

Humans have been using mind-altering substances since prehistoric times. The earliest alcoholic beverages date back to about 7,000 B.C. Coca leaves have been found in human dental remains from about 6,000 B.C. And traces of opiates appear in human bones dating to 4,000 B.C.

Cannabis can be selectively bred to produce strains with certain characteristics. Psychoactive strains of Cannabis sativa contain enough tetrahydrocannabinol (THC) to produce a high. THC levels vary by strain, from less than 1 percent up to 25 percent.

Non-psychoactive varieties, called hemp, contain negligible amounts of THC and are grown for rope, textiles, paper, food and other products. Hemp was one of the first agricultural crops, and has been found in pottery dating back to 8,000 B.C. and textiles from about 4,000 B.C.

The drug that takes away the mind

The first recorded use of cannabis as a drug was about 2,700 B.C., in China. The Chinese called it “the drug that takes away the mind” – they also used it for neurologic diseases and in religious rites. Cannabis was understood to have medical value for pain relief, as well as for gastrointestinal disorders, insomnia, blood clots and parasites.

By about the 8th century, cannabis was used for medicinal purposes in China, Egypt, Greece, India and the Middle East, and possibly parts of Europe as well. Irish physician William O’Shaughnessy is credited with bringing cannabis to the West, conducting studies on animals in the 1830s.

In the mid-19th century and early 20th century, cannabis was included in hundreds, if not thousands, of patent medicines, including tinctures, powders and syrups. They were billed as cures for gout, rheumatism, migraine, cough, asthma, “female problems,” pain, sleep problems and epilepsy.

In the early 1940s, CBD and THC were first extracted from cannabis. Twenty years later, their structures and stereochemistry were elucidated in Raphael Mechoulam’s laboratory. In 1965, Mechoulam’s lab synthesized both compounds. Since then, more than 100 cannabinoids have been catalogued.

Soon after the advances from the Mechoulam lab, cannabinoid research took off, as did the popularity of marijuana as a recreational drug. Because most research focused on the plant’s psychoactive properties, CBD—a non-psychoactive cannabinoid—was largely overlooked. However, several animal studies in the early 1970s showed that CBD had activity against epilepsy, and in 1980, a small clinical trial showed a reduction in seizure frequency in 7 of 8 patients with epilepsy taking CBD, compared with 1 of 8 taking placebo. At the same time, a flurry of studies in the 1970s and early 1980s found evidence that CBD had anxiolytic and anti-psychotic effects. Still, the main focus rested on THC. 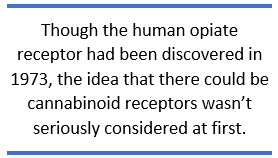 Some studies showed that THC caused changes in artificial cell membranes made only of cholesterol and phospholipid, so most believed that THC worked by disturbing the cell membrane and changing cellular behavior. Though the human opiate receptor had been discovered in 1973, the idea that there could be cannabinoid receptors wasn’t seriously considered at first.

“We knew quite a lot about the effects of THC but didn’t know how it exerted its effects,” explained Mechoulam in an interview at the 13th European Congress on Epileptology. “People thought it had a general effect. It turns out that was wrong.”

The development of in vitro assays for cannabinoids allowed researchers to delve deeper into how cannabinoids worked in the body. In the 1980s, findings from Allyn Howlett’s lab at St. Louis University provided solid evidence for the existence of cannabinoid receptors.

By 1988, a new technique had been developed that allowed the recognition sites of receptors to be detected by radiolabeling. Using a synthesized, radiolabeled cannabinoid called CP55940, Howlett’s group found that there were high-affinity binding sites—otherwise known as receptors—in rat brain membranes.

In 1990, the cannabinoid 1 (CB1) receptor was cloned in both rats (U.S. National Institutes of Health) and humans (Gérard and colleagues, Brussels). In 1993, a second cannabinoid receptor (CB2) was cloned in Sean Munro’s lab in Cambridge.

CB1, encoded by the gene CNR1, consists of 472 amino acids; the rodent form of the receptor is 98% identical. CB1 binds THC and is thought to produce the “high” of marijuana; several variations of the CNR1 gene are associated with marijuana dependence.

CB1 is one of the most abundant G-protein-coupled receptors in the central nervous system. It’s found at particularly high levels in the neocortex, hippocampus, basal ganglia, cerebellum and brainstem. CB1 also is found on peripheral nerve terminals and some other areas, such as the testis, eye, vascular endothelium and spleen.

CB2, encoded by the gene CNR2, consists of 360 amino acids. The rodent form of CB2 is about 80% identical. CB2 receptors occur mainly on immune cells, but also have been detected in the central nervous system, where they are associated with inflammation, addiction and synaptic plasticity.

“Receptors don’t exist because there’s a plant out there,” said Mechoulam in an interview at the 13th European Congress on Epileptology. “Receptors exist because we, through compounds made in our body, activate them. So we went looking for the endogenous compounds that activate the cannabinoid receptors.”

Endocannabinoids: Variations on a theme 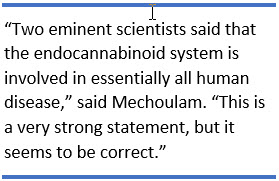 These may be the most well-known endocannabinoids, but there are others. Hundreds, in fact. They seem to be variations on a theme: a fatty acid bound to either an amino acid or an amino acid derivative. “It’s a major question mark,” Mechoulam said. “Why does our body prepare so many compounds of this type?”

Endocannabinoids behave differently from other neurotransmitters. Most neurotransmitters are synthesized and stored in vesicles. The body keeps them waiting until they’re needed, when they are released by a presynaptic neuron and act postsynaptically. In contrast, endocannabinoids are formed on demand, when and where needed; they are released from the postsynaptic neuron and act presynaptically.

“One of the major effects of endogenous cannabinoids is to regulate the release of dopamine, serotonin, and other neurotransmitters,” said Mechoulam. “They seem to be major regulators.”

They’re also involved in healing. “Endogenous cannabinoids are helping the body withstand all kinds of damage,” Mechoulam said. When his group gave 2-AG to mice with a brain injury, they had better clinical recovery, less swelling and reduced cell death, compared with controls. “We can compare [endocannabinoids] to the immune system.”

The endocannabinoid system also helps to regulate appetite. Mouse pups with blocked endocannabinoid receptors will starve themselves to death. Rimonabant, a CB1 receptor blocker, was approved in Europe in 2006 to treat obesity, but taken off the market in 2008 due to serious psychiatric side effects.

Since their discovery, endocannabinoids have been found to play a role in memory, mood, appetite and metabolism, sleep, pain response, thermoregulation and immunity. The system also appears to regulate reproduction; the developing embryo expresses cannabinoid receptors that are responsive to anandamide secreted in the uterus.