22-May-2017 7:05 AM EDT, by Keck Medicine of USC contact patient services
favorite_border 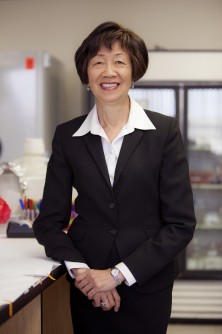 Credit: Keck School of Medicine of the University of Southern California

Amy Lee, PhD, professor of biochemistry and molecular medicine at the Keck School and the Judy and Larry Freeman Chair in Basic Science Research at the USC Norris Comprehensive Cancer Center

Newswise — LOS ANGELES – New research from the Keck School of Medicine of the University of Southern California (USC) shows new promise in the fight against one of the most lethal forms of cancer. Studies in mice with a mutation present in 90 percent of pancreatic cancer patients (the KRAS mutation) indicate that expressing only half the amount of the glucose-regulated protein GRP78 is enough to halt the earliest stage of pancreatic cancer development.

The study, funded in part by the National Institutes of Health, suggests that because the protein is required for “switching” healthy pancreatic cells that produce enzymes to digest food into potentially cancerous cells, reducing the amount of this protein delays pancreatic cancer development and prolongs survival. The study, published online on May 16 in the Proceedings of the National Academy of Sciences of the United States of America, is the first to establish the pivotal role of the protein in pancreatic cancer.

“Cancer cells are addicted to high levels of GRP78 for cancer development and growth. Our hope is that partially reducing or inactivating the protein by therapeutic agents could one day be an effective complementary therapy for pancreatic cancer and other cancers, while sparing other healthy organs,” said Amy Lee, PhD, professor of biochemistry and molecular medicine at the Keck School and the Judy and Larry Freeman Chair in Basic Science Research at the USC Norris Comprehensive Cancer Center.

Lee, who was the first scientist to clone human GRP78, has since dedicated much of her research to investigating the protein’s role in cancer progression and treatment. For her scientific contributions, Lee was honored by a MERIT award from the National Cancer Institute and elected as Fellow of the American Association for the Advancement of Science.

“As developing drugs directly targeting the KRAS genetic mutation has been challenging, we are thrilled these findings indicate that we can attack KRAS-driven pancreatic cancer through an entirely new method,” Lee said.

GRP78 is a stress-inducible protein that folds newly synthesized proteins and performs quality control in the endoplasmic reticulum (an essential component of human cells). During stress, a fraction of GRP78 is shipped out to the cell surface to perform additional growth and survival functions. Cancer cells, particularly those that survive treatment, typically undergo more stress than healthy cells, resulting in increased levels of GRP78 to help the cancer cells survive, grow and develop therapeutic resistance.

A number of studies across cancer types have shown a relationship between highly elevated levels of the protein and increased risk for cancer recurrence or decreased survival. With GRP78 emerging as an attractive anti-cancer target, there is active development of potential treatments that can inhibit GRP78 activity or expression, including some that are in early-phase clinical trials with promising results. Certain food and herbs, including green tea and soy, contain natural compounds that can suppress the protein, Lee said.

“Translating any basic science discovery into clinical practice is a long process that requires substantial resources,” Lee said. “But given the notorious difficulties of treating KRAS-mutation related cancers, particularly in a disease as devastating as pancreatic cancer, this research provides hope and a novel approach. I am excited to put our theories to test in the clinical setting.”

Founded in 1885, the Keck School of Medicine of USC is among the nation’s leaders in innovative patient care, scientific discovery, education, and community service. It is part of Keck Medicine of USC, the University of Southern California's medical enterprise, one of only two university-owned academic medical centers in the Los Angeles area. This includes the Keck Medical Center of USC, composed of the Keck Hospital of USC and the USC Norris Cancer Hospital. The two world-class, USC-owned hospitals are staffed by more than 500 physicians who are faculty at the Keck School. The school today has more than 1,500 full-time faculty members and voluntary faculty of more than 2,400 physicians. These faculty direct the education of approximately 700 medical students and 1,000 students pursuing graduate and post-graduate degrees. The school trains more than 900 resident physicians in more than 50 specialty or subspecialty programs and is the largest educator of physicians practicing in Southern California. Together, the school's faculty and residents serve more than 1.5 million patients each year at Keck Hospital of USC and USC Norris Cancer Hospital, as well as USC-affiliated hospitals Children’s Hospital Los Angeles and Los Angeles County + USC Medical Center. Keck School faculty also conduct research and teach at several research centers and institutes, including the USC Norris Comprehensive Cancer Center, the Zilkha Neurogenetic Institute, the Eli and Edythe Broad Center for Stem Cell Research and Regenerative Medicine at USC, the USC Cardiovascular Thoracic Institute, the USC Roski Eye Institute and the USC Institute of Urology.

The research above was also supported by the Julia Stearns Dockweiler Foundation in the amount of $85,000.