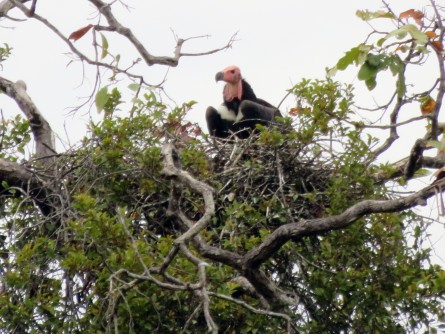 Newswise — Three nests of the Critically Endangered Red-headed vulture were found in January in Chhep Wildlife Sanctuary by conservationists from the Ministry of Environment (MoE), Wildlife Conservation Society (WCS) and local communities. The population of this species in Cambodia is possibly less than 50 individuals. These nest discoveries give hope that conservation efforts may save this species from extinction.

Global vulture populations are declining at an alarming rate. Cambodia’s three vulture species - Red-headed (Sarcogyps calvus), Slender-billed (Gyps tenuirostris), and White-rumped (Gyps bengalensis) - are all listed on the IUCN Red List as Critically Endangered. Cambodia supports the largest population of vultures in Southeast Asia, but there only a few hundred individuals left in the country.

As part of the Bird’s Nest Protection Program, WCS has employed six community members to protect the nests of these vultures. Local people are now incentivized to protect the Critically Endangered species until their eggs hatch and the chicks are able to leave the nest — as opposed to taking the chicks to sell.

“I am eager to protect vulture nests because I can generate income to support my family and I’m able to join in conserving this species that is now very rare,” said Soeng Sang, a Red-headed Vulture nest protector. “I have spent much of my time staying near the nest site to prevent any disturbances or harm. I am committed to saving this bird for the next generation.”

Increased levels of hunting, forest loss and land conversion, land encroachment and selective logging negatively affect the birds through loss of nesting sites and reduction in prey availability. In addition, at least 30 vultures were killed over the past five years in Cambodia due to widespread indiscriminate use of deadly poisons by villagers in and around water sources to catch birds and other small mammals, which is severely affecting the vulture population. “The Red-headed vulture is a very rare species; they are facing a high risk of extinction,” said Tan Sophan, WCS’s Vulture Project Coordinator in Chhep Wildlife Sanctuary. “Besides nest protection, we also organize ‘vulture restaurants’ to feed vultures every month.”

Vulture restaurants are sites where the birds are periodically provided supplementary feedings. This activity is a collaboration between the Ministry of Environment and Ministry of Agriculture, Forestry, Fishery, and a consortium of NGOs, and also doubles as a tool to raise awareness of their importance to the landscape and human health.“In addition, tourists visiting the restaurant with Sam Veasna Centre have significantly contributed to saving the species and improving local livelihoods,” Sophan added.

Vulture conservation in Chhep Wildlife Sanctuary would not be possible without support from AFD, Sam Veasna Center (SVC) and the European Union.