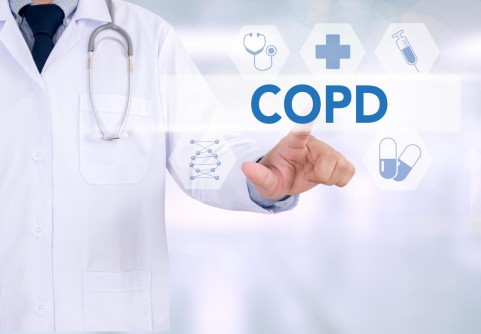 In “Reduction in All-Cause Mortality With Fluticasone Furoate/Umeclidinium/Vilanterol in COPD Patients,” David A. Lipson, MD, and co-authors report on an expanded post hoc analysis of data from the multicenter, 37-country Phase 3 IMPACT trial, which includes additional vital status data from patients one year after the start of the study.

More than 10,000 IMPACT participants with COPD who were at risk for severe exacerbations (flare-ups) were randomized to be in one of three groups:  those receiving once-daily inhalations of FF/UMEC/VI, FF/VI or UMEC/VI combinations. IMPACT participants were followed for one year.  Fluticasone furoate is an inhaled corticosteroid, while umeclidinium is a long-acting muscarinic antagonist (a type of bronchodilator) and vilanterol is a long-acting ß2 agonist (another type of bronchodilator).

The initial IMPACT study showed that daily inhalation of FF/UMEC/VI led to more significant reductions in moderate/severe exacerbations and COPD hospitalizations, as well as improved lung function and health-related quality of life than the two dual combination therapies.  The study also showed patients on triple therapy had lower death rates than those on VI/UMEC.  Data from 5.5 percent of participants were removed from the one-year analysis, however, because some investigators did not report vital status data for all-cause mortality at the end of the study.  This new analysis includes vital status data for 99.6 percent of IMPACT participants.

“Because the number of missing patients exceeded the numbers of deaths in the study we felt caution was warranted in the interpretation of the original published findings,” said Dr. Lipson, senior director, clinical sciences, GlaxoSmithKline and adjunct associate professor of medicine, Perelman School of Medicine, University of Pennsylvania.  “Given the importance of this finding for patients and physicians we undertook a global collection of the missing data at week 52.  These new repeat analyses demonstrate the robustness of the original finding.  We have concluded that we can improve survival in symptomatic patients with COPD at risk of exacerbation.”

The study focused on patients with a history of exacerbations of their COPD.

Dr. Lipson added, “We believe that the mortality finding with FF/UMEC/VI compared to UMEC/VI was primarily driven by the steroid component and its effect on reducing exacerbations, especially hospitalized exacerbations.  Frequently exacerbating patients are at higher risk of hospitalization and death. These are the patients who appear to achieve the greatest survival benefit with once-daily FF/UMEC/VI triple therapy.”

No previous study has prospectively demonstrated that drug therapy can reduce all-cause mortality in people with COPD.  Major studies done prior to IMPACT suggested mortality reductions, but were not able to prove this with certainty.

This study was funded by GlaxoSmithKline.