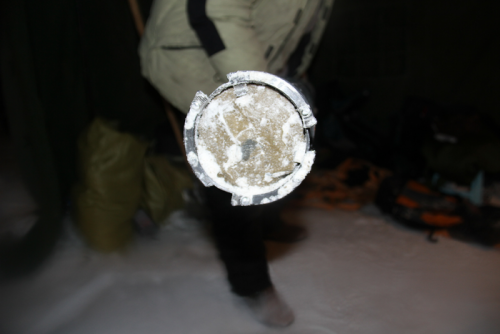 The last run of the Chongce ice core drilling in 2012, showing the sediment inside of the drill barrel (courtesy Shugui Hou)

Newswise — From September to October of 2015, a 60-person team were gathering on the Guliya ice cap in the Kunlun Mountains of the Tibetan Plateau, with the purpose to retrieve the world’s oldest ice. In a FEATURES article published in Science (29/01/2016) entitled “Tibet’s Primeval Ice: the quest for the world’s oldest ice could yield a Rosetta Stone for how Asia responds to a changing climate”, it was written that “in faint layers of dust and gas bubbles and subtle variations in chemicals within the ice, the glistening cylinder holds part of a record of ancient climate on the Tibetan Plateau that could stretch back nearly a million years”.

In fact, this is not the first try for retrieving ice cores from the Guliya ice cap. In 1992, a Guliya ice core to bedrock (308.6 m in length) was recovered at an elevation of 6 200 m above sea level. The 1992 Guliya core was featured on the cover of Science published on 6/20/1997 for its extraordinary long-time scale with the following introduction: “……The Guliya ice core to bedrock contains a regional climate history for the entire last glacial cycle, and the basal ice may exceed 500 000 years in age”. The dating results have made the 1992 Guliya core the oldest non-polar core. In comparison, the Vostok ice core (3 623 m in length) from the central East Antarctica yielded a climate history of past 420 000 years, and the EPICA Dome C ice core (3 260 m in length) also from the central East Antarctica yielded so far the longest ice core record of 800 000 years.

Dating alpine ice cores is always a challenging task. Usually, layer counting based on seasonal signals in the physical and chemical properties of the ice core is only reliable for the upper part of the core due to rapid thinning of ice layers in deeper sections. For the deeper (older) part of the ice cores, absolute dating methods, usually based on the decay of radioactive elements preserved in the ice cores, are needed to establish the core chronology. Therefore, the new Guliya ice cores drilled in 2015 provide a valuable opportunity to directly verify the chronology of the 1992 Guliya ice core, particularly with the help of modern dating techniques such as 14C, 36Cl, 40Ar and 81Kr. Such an effort is extremely necessary and urgent not only for establishing accurate chronologies of Tibetan ice cores, but also for developing reliable reconstructions of past climate and testing important climate concepts and hypotheses, such as asynchronous glaciation and Holocene temperature conundrum on the Tibetan Plateau.