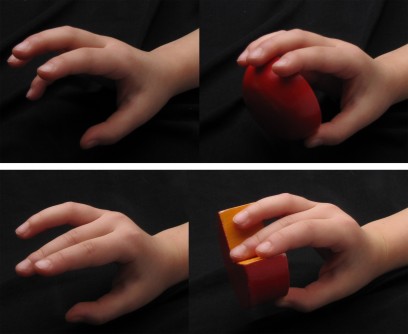 To perceive objects we touch, our brains must integrate tactile information with an awareness of the position of our fingers.

Newswise — Two types of touch information — the feel of an object and the position of an animal’s limb — have long been thought to flow into the brain via different channels and be integrated in sophisticated processing regions. Now, with help from a specially devised mechanical exoskeleton that positioned monkeys’ hands in different postures, Johns Hopkins researchers have challenged that view. In a paper published in the April 22 issue of Neuron, they present evidence that the two types of information are integrated as soon as they reach the brain by sense-processing brain cells once thought to be incapable of such higher-order thought.

Past studies have indicated that the feel of an object against the skin and position information of the hands and fingers were processed separately in the sensory system’s first-line sense processors, and then passed along to more sophisticated brain regions to be integrated. But it was a challenge to reliably differentiate brain activity caused by the two inputs from one another and from the brain’s commands to muscles, says Manuel Gomez-Ramirez, Ph.D., an assistant research scientist at The Johns Hopkins University. To solve that problem, Steven Hsiao, Gomez-Ramirez’s late mentor, and his colleagues developed a machine that positions a monkey’s hand and delivers stimuli to its fingers.

In this experiment, then-graduate student Sung Soo Kim, Ph.D., now a research specialist at the Howard Hughes Medical Institute, trained monkeys to perform an unrelated visual task while their hands were manipulated by the machine, which moved their fingers slightly from side to side and up and down at precise angles. The machine also pressed a plastic bar to the monkeys’ fingertips in different orientations. By monitoring the monkeys’ brains in real time, the research group saw that the position and touch information were conveyed through the same cells in the somatosensory cortex.

“This study changes our understanding of how position and touch signals are combined in the brain,” says Gomez-Ramirez. This information could be used in efforts to better integrate prostheses with patients’ brains so that they behave more like natural limbs, he notes.

“Holding objects and exploring the world with our hands requires integrating many sensory signals in the brain and continuously supplying this information to motor areas so that it can issue the appropriate commands for holding objects,” Gomez-Ramirez says. “Our understanding of how these processes occur is very limited, and Steve Hsiao spent a lot of time thinking about the problem and figuring out how to test it.”

Pramodsingh H. Thakur of The Johns Hopkins University was also an author on the paper.

The study was funded by the National Institute of Neurological Disorders and Stroke (grant numbers NS R01 34086 and NS R01 18787) and the Samsung Scholarship Foundation.