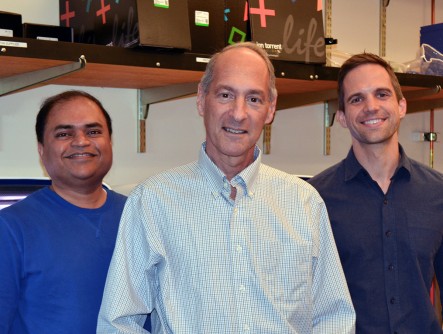 Newswise — LA JOLLA, CA – March 15, 2016 – Despite advances in organ transplant medicine in recent decades, about half of all kidney transplant patients still lose their organ to rejection within 10 years.

Now a study led by scientists at The Scripps Research Institute (TSRI) shows that genome-wide molecular profiling of kidney biopsies may be a key to catching organ rejection before it’s too late. The research demonstrates that acute and chronic kidney rejection—currently believed to be separate diseases—are actually different parts of the arc of the same immune rejection process.

“For our transplant population, this is a major new understanding of the molecular basis of immune rejection that challenges the field to reconsider its current paradigms and has multiple immediate and actionable therapy implications for patients,” said TSRI Professor Daniel Salomon, MD, director of the Laboratory for Functional Genomics at TSRI, medical program director of the Scripps Center for Organ Transplantation and leader of the multi-institution Transplant Genomics Collaborative Group (TGCG). “The insights here most likely apply to liver, heart and lung transplants, too.”

The research was published online ahead of print on March 15, 2016, by the American Journal of Transplantation. Patients Haunted by Rejection

Sometimes kidney rejection is quick to strike (acute and early)—the patient’s immune system attacks the “foreign” organ, and the kidney begins to fail within a year of transplant. Other cases of rejection move slowly (chronic and late), appearing years after the transplant and causing a progressive loss of kidney structure and function.

Doctors treat acute rejection by administering more immunosuppressant drugs, which knock back the body’s immune response, helping the new kidney function normally. Because chronic rejection presents to clinicians so differently, most doctors see it as a different and untreatable “disease” and believe losing the organ is inevitable.

“Part of this thinking about chronic rejection is reinforced by the fact that transplant physicians can’t diagnose it with current methods until there is too much tissue damage to treat or reverse the loss of the transplant,” said Salomon. “Moreover, because immunosuppressive drugs have toxicities, there is a constant pressure for doctors to reduce doses over time. Thus, the level of immunosuppression is also reduced until it finally becomes inadequate for some patients and they reject.”

Patients who lose the organ to rejection must return to dialysis, which is more expensive than a kidney transplant, and face higher risks of complications, including death.

In the new study, Salomon and his colleagues investigated whether acute and chronic rejection are related. The researchers used a technique called gene expression profiling, which measures the activity of thousands of genes at once, to compare chronic rejection, acute rejection and healthy transplant patients.

In the new study, Brian Modena, the first author of the study and a physician-scientist supported in Salomon’s laboratory by a grant to Eric Topol, director of the Scripps Translational Science Institute, applied a new computational tool to gene expression analysis called Gene Co-Expression Networks (GCN) that revealed the actual molecular mechanisms involved in immune rejection in these different biopsies.

“It’s all the same disease—whether it’s one month post-transplant or five years post-transplant,” said Salomon. “Immune-mediated rejection is a single entity at the molecular level.”

The researchers added that this entire spectrum of transplant rejection can potentially be treated with the same immunosuppressant therapies.

“The new view that emerges from this research is that almost all transplant organ failure is due to inadequate immunosuppression, and with that understanding comes a potential for a major change in the practice of post-transplant drug therapy,” said Salomon.

The researchers also identified a clue that rejection might be lurking: a kind of kidney damage and scarring called interstitial fibrosis and tubular atrophy (IFTA). Previous studies found that the presence of IFTA and inflammation—as seen under a light microscope—correlated with an increased risk of rejection, but IFTA on its own has been seen as evidence of a past injury, not active rejection, and is rarely treated.

The new research suggests that IFTA is indeed a sign of active but “silent” rejection, as molecular profiling revealed similar genes are expressed in IFTA patients and acute rejection patients.

“There was injury and inflammation there, just like in acute rejection patients—we just weren’t able to see it with the light microscope,” said Modena. “If you catch that early, you might potentially prevent chronic rejection. That would be a hugely positive benefit for our patients.”

Genetic expression profiling also proved to be a good tool for detecting “subclinical” acute rejection, which is active in about 20 percent of transplant patients in their first year and is otherwise impossible to suspect or diagnose until progression to clinical rejection.

Given the results of the new study, Salomon said that an important development would be for physicians to take regular biopsies from transplant patients, called surveillance biopsies. (This is now standard of care for the Scripps Center for Organ Transplantation and is performed at 2, 6, 12 and 24 months post-transplantation in all eligible patients.) Molecular expression profiling of these biopsies could help doctors detect early signs of acute and chronic rejection.

Salomon pointed out that such molecular profiling might even be performed via a blood test, preventing the need for multiple, invasive surveillance biopsies and allowing clinicians to measure the state of the immune response and the efficacy of immunosuppression at any time. He said such a blood test, described last year in the American Journal of Transplantation, is currently being validated in another National Institutes of Health-funded project as part of the Clinical Trials in Organ Transplantation (CTOT) consortium.

The scientists also plan to investigate the genetic expression profiles of patients with diseases such as asthma and ulcerative colitis, in which the immune system is also active. “There is much in common between immune-based diseases and much to learn about what is shared and unique,” said Modena. In addition to Salomon, Kurian and Modena, authors of the study, “Gene Expression in Biopsies of Acute Rejection and Interstitial Fibrosis/Tubular Atrophy Reveals Highly Shared Mechanisms that Correlate with Worse Long-term Outcomes,” were Lillian W. Gaber of The Methodist Hospital; Raymond Heilman of the TGCG and the Mayo Clinic; John J. Friedewald and Michael M. Abecassis of the Northwestern Comprehensive Transplant Center; Stuart Flechner of the TGCG and the Cleveland Clinic Foundation; Christopher L. Marsh of the TGCG and Scripps Health; Randall S. Sung of the TGCG and the University of Michigan, Ann Arbor; Hamid Shidban of the TGCG and St. Vincent Medical Center; Laurence Chan of the TCGC and the University of Colorado; and Jill Waalen, Andrew I. Su, Terri Gelbart, Tony S. Mondala, Steven R. Head and Suzanne Papp of TSRI.

This research was supported by the National Institutes of Health (NIH) National Institute of Allergy and Infectious Diseases (grants U19 AI063603 and U01 AI084146-05) and the NIH Clinical and Translational Science Awards Program (grant CTSA KL2 TR001112).

The Scripps Research Institute (TSRI) is one of the world's largest independent, not-for-profit organizations focusing on research in the biomedical sciences. TSRI is internationally recognized for its contributions to science and health, including its role in laying the foundation for new treatments for cancer, rheumatoid arthritis, hemophilia, and other diseases. An institution that evolved from the Scripps Metabolic Clinic founded by philanthropist Ellen Browning Scripps in 1924, the institute now employs about 2,700 people on its campuses in La Jolla, CA, and Jupiter, FL, where its renowned scientists—including two Nobel laureates—work toward their next discoveries. The institute's graduate program, which awards PhD degrees in biology and chemistry, ranks among the top ten of its kind in the nation. For more information, see http://www.scripps.edu.