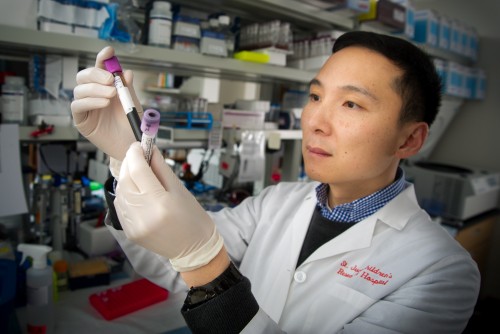 Newswise — Newly identified germline variations in a key tumor suppressor gene predispose individuals to develop leukemia as children and leave them with a 1-in-4 chance of developing a second cancer later. St. Jude Children’s Research Hospital scientists led the study, which appears today in the Journal of Clinical Oncology.

Researchers sequenced the TP53 tumor suppressor gene in 3,858 children with acute lymphoblastic leukemia (ALL) and identified 22 high-risk germline variations. The variants were associated with reduced gene activity and were five times more frequent in pediatric ALL patients than individuals without the disease. Germline variations are usually inherited and carried in the DNA of every cell, not just in the DNA of tumor cells.

The 26 patients in this study who carried the high-risk TP53 variants were also almost four times more likely than other pediatric ALL patients to die of their disease or related complications.

“These germline variations are a double whammy for carriers,” said corresponding author Jun J. Yang, Ph.D., an associate member of the St. Jude Department of Pharmaceutical Sciences and Department of Oncology. “Not only is their risk of developing leukemia very high, they are also more likely to relapse or develop a second cancer.”

The association between the high-risk variants and second cancers is so significant that St. Jude researchers are exploring how to help patients and families manage their risk, Yang said. “Maybe these patients should avoid certain ALL therapies in order to reduce their risk of developing another cancer,” he said. “I believe this finding may change treatment and follow-up for these high-risk patients.”

ALL is the most common childhood cancer. In most cases, the exact cause is unknown. This study suggests that the high-risk TP53 variants are responsible for about 0.7 percent of cases. The patients in this study include a cross-section of the U.S. population. They were enrolled in clinical trials of the Children’s Oncology Group, a clinical research cooperative.

This study expanded on the initial reports and revealed a large number of novel TP53 pathogenic variants that are related to the risk of developing ALL. Researchers reported that another 27 TP53 variants were identified in this study, some of which may still prove to be pathogenic, Yang said.

Inherited variations in TP53 are a hallmark of Li-Fraumeni syndrome. This rare disorder runs in families and predisposes individuals to different cancers. Until recently, leukemia had not been commonly associated with the syndrome.

Li-Fraumeni syndrome might partially explain the high rate of second cancers experienced by pediatric ALL survivors with the high-risk TP53 variants, researchers noted. “The ALL treatment might have added to that risk but we do not know for sure,” Yang said. Five patients with the high-risk variants included in this study developed second cancers, including solid tumors and other leukemias.