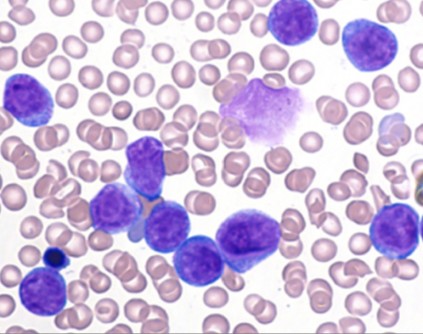 A blood sample from mice expressing both RUNX1 and mutant FLT3 shows the presence of undifferentiated, proliferative leukemic cells (blue).

Newswise — Researchers in Germany have discovered that a tumor suppressor protein thought to prevent acute myeloid leukemia (AML) can actually promote a particularly deadly form of the disease. The study, “RUNX1 cooperates with FLT3-ITD to induce leukemia,” which will be published online February 17 in The Journal of Experimental Medicine, suggests that targeting this protein could be an effective treatment for certain AML patients.

AML accounts for over 1 percent of all cancer deaths in the United States and is characterized by an excessive proliferation of hematopoietic stem cells in the bone marrow and their subsequent failure to differentiate into white blood cells. AML can be caused by various combinations of gene mutations. One of the most common mutations is in the gene encoding the cell surface signaling protein FLT3, and patients with this mutation show poor rates of survival. The mutant form of FLT3 can promote cell proliferation, but experiments in mice have shown that it isn’t sufficient to block white blood cell differentiation and induce AML on its own.

Carol Stocking and colleagues at the Heinrich-Pette-Institute, Leibniz Institute for Experimental Virology in Hamburg noticed that many patients carrying the mutant form of FLT3 also showed increased levels of a transcription factor called RUNX1. “This was unexpected because up to 20 percent of AML patients carry mutations that inactivate RUNX1, which is generally considered to be a tumor suppressor that prevents the formation of leukemias,” Stocking says.

RUNX1 may therefore suppress the initiation of AML but, after being activated by mutant FLT3, block white blood cell differentiation and promote tumor development. “Therapies that can reverse this differentiation block may offer significant therapeutic efficacy in AML patients with FLT3 mutations,” says Stocking. “Ablating RUNX1 is toxic to leukemic cells but not to normal hematopoietic stem cells, so inhibiting RUNX1 may be a promising target in combination with FLT3 inhibitors.”