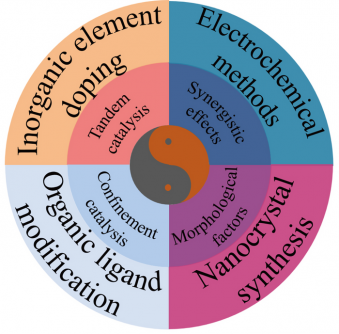 Because of the multi-electron reaction mechanisms, the CO2RR products are varied, so the catalyst design is crucial. Substantial strategies have been devoted to searching CO2RR catalysts for specific products. The catalysts with different components or the different intrinsic structure with the same component can both invoke distinct performance. Therefore, reasonable strategies for tuning the intrinsic and external structure of catalysts have become a primary concern. It is important to develop new strategies for preparing CO2RR catalysts, while the crystal plane, defect, vacancy or multi-component factors in the structure may lead to a series of effects to improve the catalytic activity. The analysis of the activity sources of different catalysts can reveal the catalytic intrinsic nature, which can provide theoretical support for designing CO2RR catalysts.

Chinese Journal of Catalysis is co-sponsored by Dalian Institute of Chemical Physics, Chinese Academy of Sciences and Chinese Chemical Society, and it is currently published by Elsevier group. This monthly journal publishes in English timely contributions of original and rigorously reviewed manuscripts covering all areas of catalysis. The journal publishes Reviews, Accounts, Communications, Articles, Highlights, Perspectives, and Viewpoints of highly scientific values that help understanding and defining of new concepts in both fundamental issues and practical applications of catalysis. Chinese Journal of Catalysis ranks among the top two journals in Applied Chemistry with a current SCI impact factor of 12.92. The Editors-in-Chief are Profs. Can Li and Tao Zhang.