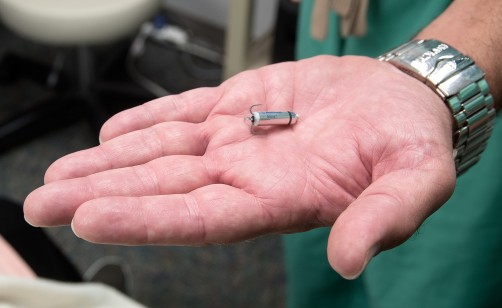 The wireless Micra pacemaker is just an inch long, about one-tenth the size of conventional pacemakers.

Newswise — WINSTON-SALEM, N.C. – March 1, 2017 – Two medical devices approved by Food and Drug Administration within the past year – a miniaturized pacemaker that doesn’t have any wires and a coronary stent that gradually dissolves in the body – are showing promise as effective treatments for people with certain heart and vascular problems.

The new pacemaker, called the Micra Transcatheter Pacing System, is just an inch long, about one-tenth the size of traditional devices, and is the first “leadless” pacemaker to be approved for use in the United States.

Pacemakers are surgically implanted devices that generate electrical impulses to treat irregular or stalled heartbeats. Conventional pacemakers are placed under the skin near the collarbone and connected to the heart by lead wires that run through a vein. The Micra’s smaller size, however, allows it to be implanted directly in the heart’s right ventricle chamber. This eliminates the lead wires and the problems associated with them, which can include infection and interference with other medical treatments such as chemotherapy and diagnostic tests such as MRIs.

At Wake Forest Baptist Medical Center, the new pacemaker has been employed to treat bradycardia, an abnormally slow heart rate that can cause dizziness and fainting spells and lead to heart failure.

“Slow heartbeat is increasingly common as people age, and it can be compounded by medications used to treat other problems,” said Patrick Whalen, M.D., director of electrophysiology at Wake Forest Baptist. “The Micra and devices like it will change how we treat patients with slow heartbeats in the future.”

The tiny pacemaker already is working well for Dolores Van Vorst, 79, of Salisbury, N.C. Last fall she became the first Wake Forest Baptist patient to receive the device, after becoming faint and dizzy following a chemotherapy treatment for breast cancer.

Van Vorst said recently that her new pacemaker works perfectly, that she hasn’t had a single episode of dizziness and that she is able to receive standard treatment for her breast cancer.

Doctors at Wake Forest Baptist also have begun to use the newly approved stent.

The device, called the Absorb GT1 Bioresorbable Vascular Scaffold System, is the first fully absorbable stent for the treatment of coronary artery disease, the most common type of heart disease.Coronary artery disease is caused by the buildup of plaque that restricts the flow of blood to the heart, which can cause chest pain, shortness of breath and other symptoms and lead to heart attack and stroke. The condition is frequently treated with the insertion of a stent – a tiny mesh tube – into an artery clogged by plaque to hold it open and restore the free flow of blood. Many stents are coated with drugs that help keep the artery from re-closing.

Most stents are made of metal and remain in the body permanently, which can produce negative side effects in some people. The Absorb scaffold, on the other hand, is made of a biodegradable polymer that is gradually absorbed by the body and completely dissolves after about three years. The device also releases a drug to prevent the artery from narrowing again.

“The lifetime benefit of a metal-free coronary artery is better,” said Robert Applegate, M.D., associate director of the Heart and Vascular Center at Wake Forest Baptist.

Thomas Leroy Walls, 64, of Independence, Virginia, was the first person to get this new type of stent at Wake Forest Baptist. A former masonry worker who was having trouble breathing, he was diagnosed with a clogged artery after passing out during a stress test.

Walls was able to go home the day after he underwent the minimally invasive procedure to place the Absorb scaffold. Today, he’s watching his diet, spending time with his grandchildren and enjoying an activity that he had to cut back on when he had difficulty breathing.

“I go to square dancing two to three times a week now,” he said. “And I’m doing fine. No problems at all.”

David Zhao, M.D., director of Wake Forest Baptist’s Heart and Vascular Center, said the new pacemaker and stent are examples of how advances in technology can quickly benefit patients. “Many of our patients are elderly and many are really limited in terms of the quality of their lives because of their illness,” he said. “They have heart failure, they have a valve disease, they are coming in with a heart attack. The best part of our job is being able to help these patients.”