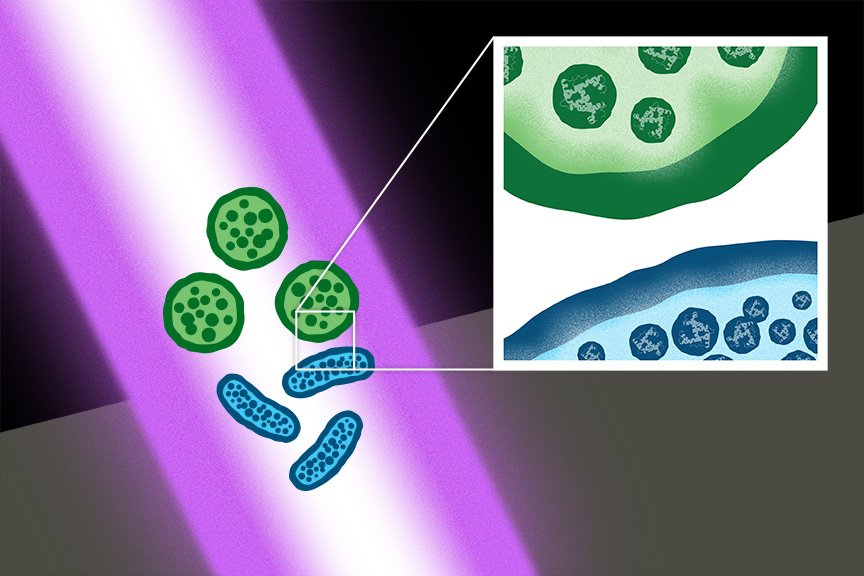 Researchers at Washington University School of Medicine in St. Louis have found that multidrug-resistant bacteria and bacterial spores can be killed by ultrashort-pulse lasers. The findings could lead to new ways to sterilize wounds and blood products without damaging human cells.

Newswise — Life-threatening bacteria are becoming ever more resistant to antibiotics, making the search for alternatives to antibiotics an increasingly urgent challenge. For certain applications, one alternative may be a special type of laser.

Researchers at Washington University School of Medicine in St. Louis have found that lasers that emit ultrashort pulses of light can kill multidrug-resistant bacteria and hardy bacterial spores. The findings, available online in the Journal of Biophotonics, open up the possibility of using such lasers to destroy bacteria that are hard to kill by other means. The researchers previously have shown that such lasers don’t damage human cells, making it possible to envision using the lasers to sterilize wounds or disinfect blood products.

“The ultrashort-pulse laser technology uniquely inactivates pathogens while preserving human proteins and cells,” said first author Shaw-Wei (David) Tsen, MD, PhD, an instructor of radiology at Washington University’s Mallinckrodt Institute of Radiology (MIR). “Imagine if, prior to closing a surgical wound, we could scan a laser beam across the site and further reduce the chances of infection. I can see this technology being used soon to disinfect biological products in vitro, and even to treat bloodstream infections in the future by putting patients on dialysis and passing the blood through a laser treatment device.”

Tsen and senior author Samuel Achilefu, PhD, the Michel M. Ter-Pogossian Professor of Radiology and director of MIR’s Biophotonics Research Center, have been exploring the germicidal properties of ultrashort-pulse lasers for years. They have shown that such lasers can inactivate viruses and ordinary bacteria without harming human cells. In the new study, conducted in collaboration with Shelley Haydel, PhD, a professor of microbiology at Arizona State University, they extended their exploration to antibiotic-resistant bacteria and bacterial spores.

The researchers trained their lasers on multidrug-resistant Staphylococcus aureus (MRSA), which causes infections of the skin, lungs and other organs, and extended spectrum beta-lactamase-producing Escherichia coli (E. coli), which cause urinary tract infections, diarrhea and wound infections. Apart from their shared ability to make people miserable, MRSA and E. coli are very different types of bacteria, representing two distant branches of the bacterial kingdom. The researchers also looked at spores of the bacterium Bacillus cereus, which causes food poisoning and food spoilage. Bacillus spores can withstand boiling and cooking.

In all cases, the lasers killed more than 99.9% of the target organisms, reducing their numbers by more than 1,000 times.

Viruses and bacteria contain densely packed protein structures that can be excited by an ultrashort-pulse laser. The laser kills by causing these protein structures to vibrate until some of their molecular bonds break. The broken ends quickly reattach to whatever they can find, which in many cases is not what they had been attached to before. The result is a mess of incorrect linkages inside and between proteins, and that mess causes normal protein function in microorganisms to grind to a halt.

“We previously published a paper in which we showed that the laser power matters,” Tsen said. “At a certain laser power, we’re inactivating viruses. As you increase the power, you start inactivating bacteria. But it takes even higher power than that, and we’re talking orders of magnitude, to start killing human cells. So there is a therapeutic window where we can tune the laser parameters such that we can kill pathogens without affecting the human cells.”

Heat, radiation and chemicals such as bleach are effective at sterilizing objects, but most are too damaging to be used on people or biological products. By inactivating all kinds of bacteria and viruses without damaging cells, ultrashort-pulse lasers could provide a new approach to making blood products and other biological products safer.

“Anything derived from human or animal sources could be contaminated with pathogens,” Tsen said. “We screen all blood products before transfusing them to patients. The problem is that we have to know what we’re screening for. If a new blood-borne virus emerges, like HIV did in the ’70s and ’80s, it could get into the blood supply before we know it. Ultrashort-pulse lasers could be a way to make sure that our blood supply is clear of pathogens both known and unknown.”