Wood, a geotechnical engineer, is part of NSF-sponsored GEER mission 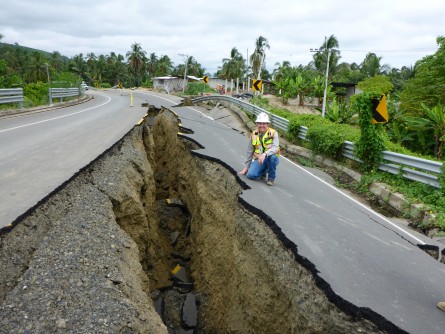 Newswise — FAYETTEVILLE, Ark. – Last week’s magnitude 7.1 earthquake near Puebla, Mexico, killed and injured hundreds of people and caused widespread damage to structures in Mexico City, despite the epicenter being more than 70 miles from the capital.

Civil engineering professor Clint Wood, a geotechnical-engineering specialist, will travel to Mexico City this week to study the earthquake’s impact on buildings and infrastructure in the area.

Wood was chosen to participate in a Geotechnical Extreme Events Reconnaissance, or GEER, mission sponsored by the National Science Foundation. GEER conducts reconnaissance efforts of extreme events such as earthquakes, tsunamis and hurricanes. The team will gather data to advance understanding of earthquakes and their engineering effects.

Wood has participated in several previous GEER missions, including when national teams were sent to Ecuador last year and New Zealand in 2011.

He uses broadband seismometers to measure low-intensity stress waves. By measuring the frequency and wavelength of these waves as they pass through arrays of seismometers, Wood can estimate the shear-wave velocity and layering of the soil underneath the arrays. Understanding the shear-wave velocity of the soil helps engineers understand ground motions recorded during earthquakes and will contribute to the design of buildings that can better withstand future earthquakes.

A short video about Wood’s research can be viewed on the Research Frontiers website at http://researchfrontiers.uark.edu/2016/characterizing-soil-composition/.