29-Jan-2018 11:05 AM EST, by University of Minnesota College of Science and Engineering
favorite_border 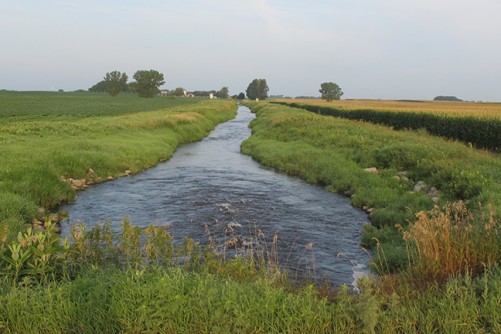 An agricultural ditch conveys runoff from corn and soybean fields. 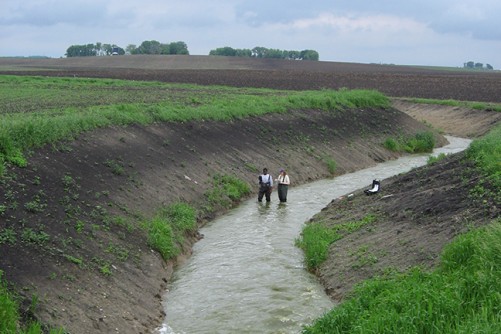 Researchers measure streamflow and collect water samples in the field. 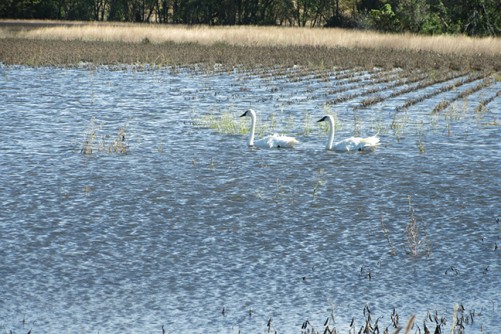 Newswise — MINNEAPOLIS / ST. PAUL (01/29/2018) — A study by University of Minnesota researchers provides new insights to demonstrate that multiple wetlands or ‘wetland complexes’ within a watershed are extremely effective at reducing harmful nitrate in rivers and streams. These wetlands can be up to five times more efficient per unit area at reducing nitrate than the best land-based nitrogen mitigation strategies.

In agricultural regions like the United States Midwest, excess nitrate derived from crop fertilizer makes its way to rivers and streams through subsurface drainage systems and agricultural ditches. Once in streams and rivers, high nitrate concentrations can be harmful to ecosystems and human health. This includes impacts such as drinking water contamination and the Gulf of Mexico Dead Zone. Although the topic has been the focus of extensive research, little traction has been made toward effective strategies for nitrate reduction at the landscape scale.

In this study, researchers used water samples collected over a four-year period from more than 200 waterways within the intensively managed, 17,000-square-mile Minnesota River basin, coupled with geo-spatial information about land use in the watershed. They were able to isolate the effect of wetlands on stream and river nitrate concentrations within large watersheds.

This last finding is of particular interest to the current policy debate over management and regulations that influence water quality in agricultural regions. While there is strong scientific consensus that small or temporary water bodies such as ephemeral wetlands play essential roles for improving water quality downstream, their legal status for protection under the Clean Water Act is uncertain. Court rulings expected in 2018 could have a large impact on how, and if, these water bodies are protected in years to come.

“We value what we can measure, so this is an important step forward in recognizing that as we lose wetlands, we also lose the significant benefits they provide in terms of pollution control,” said Amy Hansen, research associate at the University of Minnesota St. Anthony Falls Laboratory and one of the lead authors of the study.

The contribution of small wetlands is also especially important for the future. Climate forecasts for the region predict increases in both precipitation frequency and magnitude—conditions under which this study found that wetlands play a measureable role in reducing riverine nitrate.

“Our work shows that wetland restoration could be one of the most effective methods for comprehensive improvement of water quality in the face of climate change and growing global demand for food,” said study co-author Jacques Finlay, a professor in the University of Minnesota’s Department of Ecology, Evolution and Behavior in the College of Biological Sciences.

The results of this research not only help to advance the science of wetlands and pollution control, but also can provide practical applications for practitioners looking to develop guidance on wetland restoration siting and potential benefits. By being able to target locations on the landscape where wetland restoration would be most effective for nitrate removal, more strategic alliances and funding may become available to make such projects happen.

“The location of the wetlands are important predictors of how effective they are at reducing nitrate,” Hansen said. “Water quality programs that target these locations would be more cost effective as well.”

Others agree that more wetlands could be a win-win locally and nationally.

“Agricultural productivity benefits the economy, but is often accompanied by environmental costs,” said Tom Torgersen, director of the National Science Foundation (NSF)’s Water, Sustainability and Climate program that funded the research. “This study demonstrates that retaining or restoring wetlands in intensively managed agricultural watersheds would reduce nitrate in rivers and improve local water quality, while also reducing nitrate exports to the Gulf of Mexico hypoxic zone.”

In addition to Hansen and Finlay, other authors of the study were Christy Dolph, University of Minnesota Department of Ecology, Evolution and Efi Foufoula-Georgiou, University of California, Irvine.

To read the full research paper entitled “Contribution of wetlands to nitrate removal at the watershed scale,” visit the Nature Geoscience website.