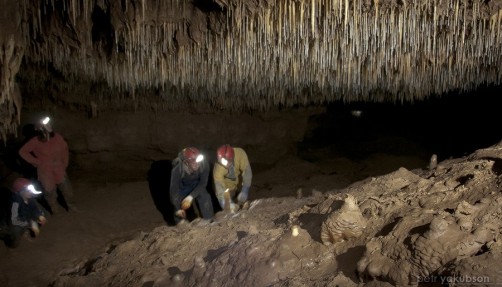 Author Jonathan Baker and colleagues examine stalagmite KC-1 prior to collection. This stalagmite, which was analyzed at UNLV and UNM, had grown for approximately 10,000 years.

UNLV Geoscience Ph.D. student Jonathan Baker has found evidence that shows nearly continuous warming from the end of the last Ice Age to the present in the Ural Mountains in central Russia.

The research, which was published today in top geoscience journal Nature Geoscience, shows continual warming over the past 11,000 years, contradicting the current belief that northern hemisphere temperatures peaked 6,000 to 8,000 years ago and cooled until the pre-Industrial period.

Baker’s research, done in conjunction with UNLV geoscientist Matthew Lachniet, Yemane Asmerom and Victor Polyak of the University of New Mexico, and Russian scientist Olga Chervyatsova, shows that winter temperature variations in continental Eurasia are warmer today than any time in the past 11,000 years.

This study contradicts previous work likely because those studies focused on summer temperature trends and not the more sensitive winter temperature variations that were not previously available, Baker said.

The new finding is based on precisely dated isotope temperature record and supports computer models for Eurasia that predicted continual warming. The research showed that disappearing ice in the Arctic regions of North America controlled the warming trend as the Ice Age glaciers retreated. Later, rising greenhouse gases, like carbon dioxide and methane, were likely responsible for the continued warming in the Ural Mountains.

The cave climate record has important implications for the future, Lachniet explained.  “Because greenhouse gas concentrations are increasing at rates unprecedented for the past 800,000 years, human-caused warming will be superimposed on the ‘natural’ trend,” he said.

Baker added, “Over the past century, winters in continental Eurasia warmed 70 times faster than during the previous 7,000 years, according to our record. At this pace, the warming will continue to pose severe and detrimental impacts throughout the region.”

As modern temperatures are influenced in part by greenhouse gases, both summers and winters are expected to warm, whereas past temperatures in those seasons had opposing trajectories, Baker said.

Baker conducted the research while living in Russia as a Fulbright grantee. There he worked with co-author Olga Chervyatsova and the Ufa Speleo Club to collect stalagmites from Kinderlinksaya Cave, located roughly 750 miles east of Moscow in the southern Ural Mountains.

The data were obtained using state-of-the art geochemical techniques at the Las Vegas Isotope Science Laboratory at UNLV and the Radiogenic Isotope Laboratory at the University of New Mexico. Both facilities were supported by infrastructure grants from the National Science Foundation. The research was also supported by the Ralph Stone Fellowship of the National Speleological Society.