The story in brief. 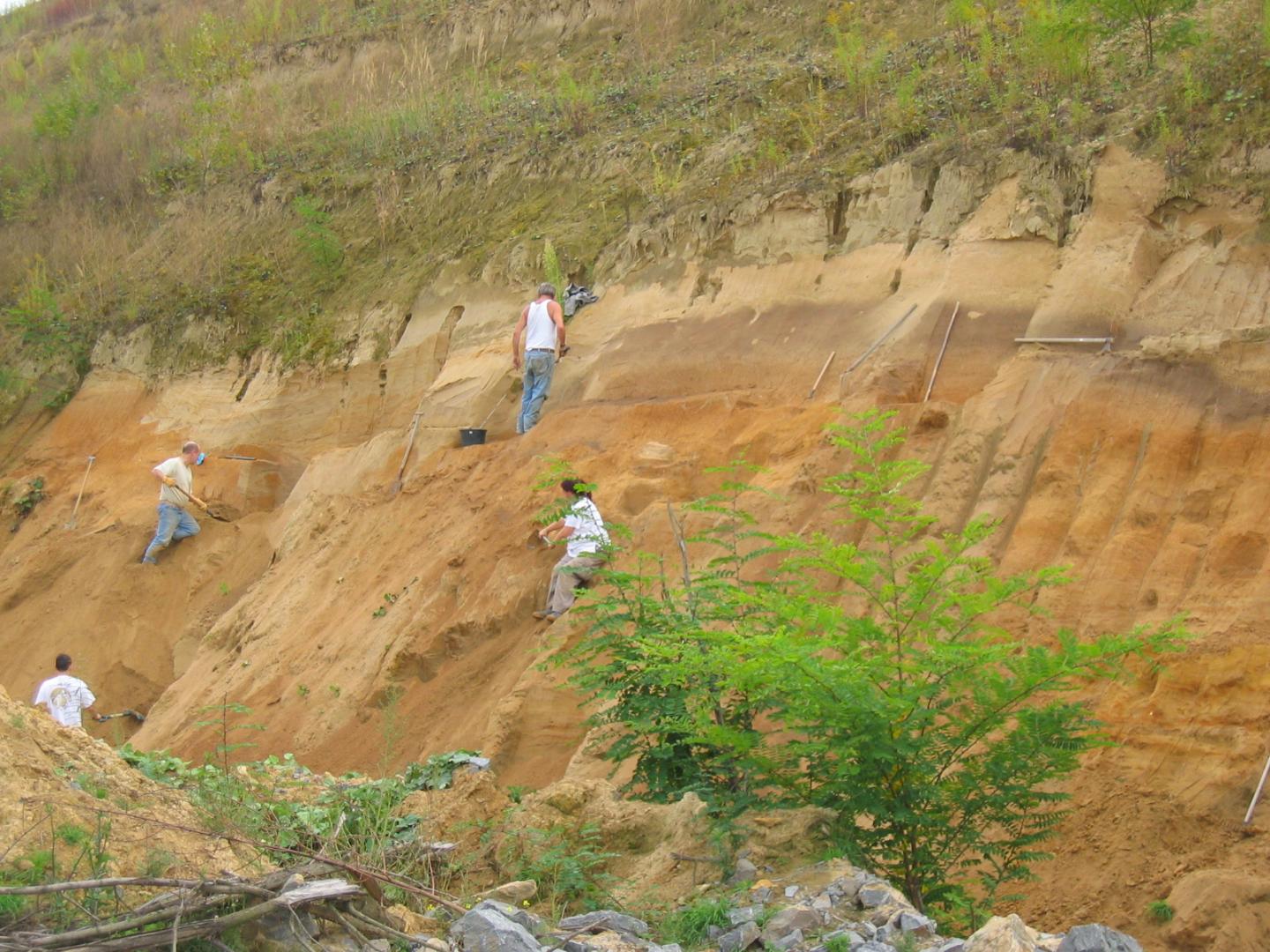 Nussloch, Germany. The succession of layers in the loess is like a climate archive. To obtain precise data the outcrop was cleaned carefully and the stratigraphic read properly before samples were taken for dating and further analysis 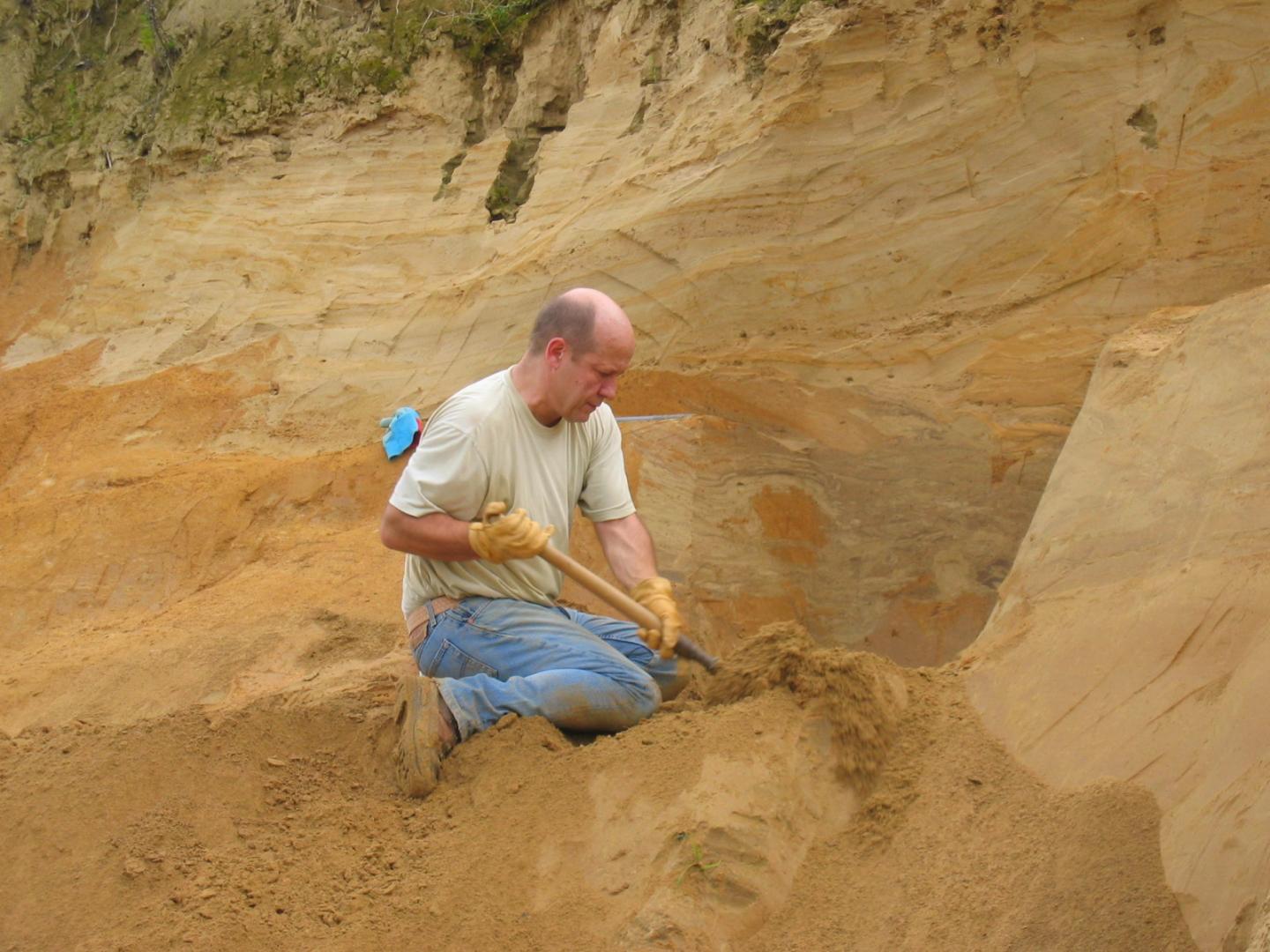 Denis-Didier Rousseau at the excavation site at Nussloch, 2005. Walls, roughly 3-4 meters wide and two meters high or more must be prepared to read properly the stratigraphy before taking parallel samples.

Newswise — Every late winter and early spring, huge dust storms swirled across the bare and frozen landscapes of Europe during the coldest periods of the latest ice age. These paleo-tempests, which are seldom matched in our modern climate frequently covered Western Europe in some of the thickest layers of ice-age dust found anywhere previously on Earth. This is demonstrated by a series of new estimates of the sedimentation and accumulation rates of European loess layers obtained by Senior Research Scientist Denis-Didier Rousseau from Ecole Normale Supérieure in Paris, France, and colleagues. The work, which is published in Quaternary Science Reviews is part of the TiPES project on tipping points in the Earth system, coordinated by The University of Copenhagen.

In the study Denis-Didier Rousseau and colleagues reinterpreted layers in loess from Nussloch, Germany. Loess is a fine-silt-sized earth type found all over the world. It mainly consists of aeolian sediments, which is material transported by the wind from dry areas without vegetation such as deserts of any type, moraines, or dried-out river beds.

Within the aeolian sediments, darker layers of paleosol alternate within the loess layers. Every layer in the loess represents a shift in climatic conditions. At Nussloch the paleosols stem from periods of milder climate, called interstadials during the ice age. The aeolian layers were deposited during the cold periods and consist mainly of dust and silt from the dry riverbeds of the Rhine river.

Traditionally in the academic field of paleo-climate, it has been assumed that interstadial paleosols developed on top of the underlying layer, by accumulation when the shift to a relatively mild climate allowed a richer biology to flourish in the region.

But careful sampling and accurate dating of the loess sedimentation from Nussloch with luminescence and C14 by Denis-Didier Rousseau and colleagues have now shown that this is not the case. Instead, in Europe, paleosols developed down into the underlying layer, not on top of the dust.

"In Europe, the paleosols are being embedded in the aeolian deposits. And when you are considering this, you have to take into account the thickness of the paleosol when you evaluate the dust deposition. Then we found aeolian accumulation and sedimentation rates which are much more precise than they were previously," says Denis-Didier Rousseau.

From this, it has been possible to construct new age models and recalculate sedimentation rates and mass balance for European loess layers in a range of samples from Brittany, Northern France Eastward to Ukraine on an almost longitudinal transect.

The results show, that during the last glacial maximum, Western Europe was dustier than China which has otherwise been presumed to be the dustiest region on Earth in the coldest periods of the ice ages.

The new estimations of ice age dust accumulation in Europe fit a range of climate model simulations. The result thus has the potential to aid the understanding of the abrupt warming and cooling periods during the ice ages called Dansgaard/Oeschger events which bear the marks of climate tipping points.

Caption: The story in brief.

Caption: Nussloch, Germany. The succession of layers in the loess is like a climate archive. To obtain precise data the outcrop was cleaned carefully and the stratigraphic read properly before samples were taken for dating and further analysis

Caption: Denis-Didier Rousseau at the excavation site at Nussloch, 2005. Walls, roughly 3-4 meters wide and two meters high or more must be prepared to read properly the stratigraphy before taking parallel samples.