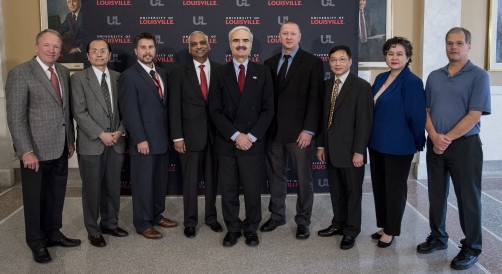 Newswise — The University of Louisville has received one of its largest grants for medical research in the school’s 219-year history, a $13.8 million award from the National Institutes of Health to study a promising new type of adult cardiac stem cell that has the potential to treat heart failure.

The announcement on Friday was made by Gregory Postel, M.D., interim president of UofL, and the study’s principal investigator, Roberto Bolli, M.D., director of UofL’s Institute of Molecular Cardiology. Bolli also serves as scientific director of the Cardiovascular Innovation Institute at UofL and as a professor and chief of the Division of Cardiovascular Medicine at the School of Medicine.

“This is a prestigious grant reflecting the magnitude of the work being conducted here,” Postel said. “Being awarded this grant is a huge, huge accomplishment.”

Bolli thanked the National Heart, Lung and Blood Institute and the NIH for their support. “It is critical that we have this type of support for the important research programs that we carry out, which can help patients around the world,” he said.

Heart failure affects millions of people, and the most common cause is a heart attack. When a person suffers a heart attack, part of the heart muscle dies from lack of oxygen and is replaced with scar tissue, which does not contract. Because of the loss of muscle, the heart becomes weaker and less able to pump.

Until now, conventional treatments for heart failure have consisted of surgery or medications, which can alleviate symptoms but do not cure the disease. In contrast, Bolli’s focus has been on how to repair the heart itself and actually cure heart failure using a patient’s own stem cells. It is an approach that could revolutionize the treatment of heart disease.

The NIH grant is a continuation of a Program Project Grant (PPG) that Bolli and his team were originally awarded in 2005. The overall goal of this PPG is the use of stem cells to repair the damage caused by a heart attack by regenerating heart muscle in the area that died, replacing the scar tissue with new muscle and thereby making the heart stronger and able to pump more blood.

A PPG is a cluster of several projects with a common focus relating to one theme, in this case, the use of adult stem cells to repair the heart. It involves a collaboration among different investigators working as a team, a collaboration that otherwise might not be able to occur without funding.

The latest round of funding comes after Bolli and his colleagues discovered a new population of adult stem cells, called CMCs, in the heart three years ago.

“CMCs seem to be more effective,” Bolli said. “In addition to showing more promise than those we have used in the past, these cells also offer several advantages in that they can be produced more easily, faster, more consistently and in larger numbers than other adult stem cells, which have proven tricky.”

He said this would make them easier to apply for widespread use, as specialized labs to isolate the cells would not be needed as with other types of adult stem cells.

Bolli and his team want to find out what CMCs will do when transplanted into a diseased heart in mice and pigs, ultimately laying the groundwork for clinical trials in patients.

On Friday, Postel noted that the NIH didn’t just approve UofL’s grant application – a long, multistep process involving more than a dozen reviewers who are experts in the field – it funded the project with a perfect score and rare high praise. In fact, the committee reviewing the application concluded Bolli’s program was, quote “exceptional,” with “significant translational impact, an exceptional leader and investigative team and an exceptional environment.”

“We are continually striving for new and better ways to treat heart disease,” Bolli said. “I’m confident we are not that far from a cure.”

The research team on the Program Project Grant is shown on the steps of the Abell Administration Center at the UofL Health Sciences Center in October 2016, with principal investigator Roberto Bolli, MD, at front center.