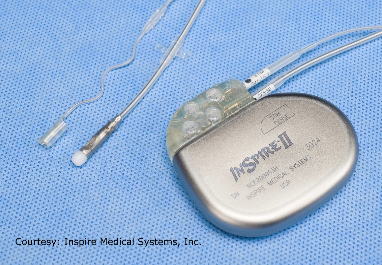 Newswise — CLEVELAND: Results published in a new study in the Jan. 9 issue of the New England Journal of Medicine report that mild electronic stimulation therapy to the upper airway during sleep is effective in reducing obstructive sleep apnea (OSA).

In the Stimulation Therapy for Apnea Reduction (The STAR Trial) study, researchers tested an implantable electronic stimulation device called Inspire™ Upper Airway Stimulation (UAS) therapy, designed to significantly reduce the burden of obstructive sleep apnea by delivering stimulation to the hypoglossal nerve timed to each breathing cycle. The mild stimulation is intended to restore tone during sleep to the muscles that control the base of tongue, preventing the tongue from collapsing and obstructing the airway during sleep.

“This device is a first-of-its-kind therapy and has the potential to help the many people suffering from moderate to severe sleep apnea who are unable to use or cannot tolerate CPAP (continuous positive airway pressure),” said Kingman Strohl, MD, senior author of the study and pulmonologist at University Hospitals Case Medical Center and Professor of Medicine at Case Western Reserve University School of Medicine. “At a year following surgical implantation, patients experienced substantial decreases in the number of interruptions of sleep by apnea, and improvements in symptoms of waketime sleepiness, snoring and quality of life.” Lead author is Patrick J. Strollo, MD, of the Division of Pulmonary Allergy and Critical Care Medicine at the University of Pittsburgh.

The Phase III safety and efficacy study was conducted at multiple American and European clinical sites. There were 126 participants, 83 percent of whom were men. To enroll, the research participants had to have moderate to severe sleep apnea and be unable to accept or adhere to CPAP therapy. In addition, the patients could not be too heavy (a BMI less than 32), a range of apneas severity in the moderate to moderately severe level, and evidence that the sleep-related obstruction might be at the level of the tongue.

“These selection criteria require careful team assessments of each patient by the surgeon and the sleep specialist,” Dr. Strohl said. “And to optimize the stimulation there was a new skill needed in the sleep laboratory to adjust the electrical stimulation over a couple of nights.”

Objective outcomes were measured on two scales: The apnea-hypopnea index (AHI; the number of apnea or hypopnea events per hour) and the oxygen desaturation index (ODI; the number of times per hour of sleep that the blood oxygen level drops by more than four percent). At 12 months, the median AHI score decreased 68 percent and the ODI score decreased 70 percent. Most participants reported a reduction of sleep apnea effects and improved quality of life.

According to Dr. Strohl, the results are very encouraging. “While many patients have found help with CPAP, some patients struggle with CPAP or cannot tolerate the mask, and thus remain untreated,” he said. “The severity of OSA in this group might not be easily managed by oral appliance or surgery. Upper-airway stimulation could provide an effective alternative,” he said.

At home, patients control when the Inspire therapy is turned on and off using a handheld programmer. In contrast to other surgical procedures to treat sleep apnea, Inspire therapy does not require removing or permanently altering an OSA patient’s facial or airway anatomy.

More than 18 million Americans suffer from OSA, which is characterized by repeated episodes of upper airway collapse during sleep. Patients with OSA stop breathing frequently during sleep, often for a minute or longer. Daytime sleepiness, depression, weight gain, increase in industrial accidents and diminished quality of life are all commonly observed in people who suffer from OSA as a result of fragmented sleep patterns.

All data on Inspire UAS therapy are under regulatory review by the FDA. There is a provisional approval for the therapy in Europe. “We expect a careful assessment by the FDA for this first in-class therapy,” said Dr. Strohl. The study was funded by Inspire Medical Systems.

About University HospitalsUniversity Hospitals, the second largest employer in Northeast Ohio, serves the needs of patients through an integrated network of hospitals, outpatient centers and primary care physicians in 16 counties. At the core of our health system is University Hospitals Case Medical Center, one of only 18 hospitals in the country to have been named to U.S. News & World Report’s most exclusive rankings list: the Best Hospitals 2013-14 Honor Roll. The primary affiliate of Case Western Reserve University School of Medicine, UH Case Medical Center is home to some of the most prestigious clinical and research centers of excellence in the nation and the world, including cancer, pediatrics, women's health, orthopaedics and spine, radiology and radiation oncology, neurosurgery and neuroscience, cardiology and cardiovascular surgery, organ transplantation and human genetics. Its main campus includes the internationally celebrated UH Rainbow Babies & Children's Hospital, ranked among the top children’s hospitals in the nation; UH MacDonald Women’s Hospital, Ohio's only hospital for women; and UH Seidman Cancer Center, part of the NCI-designated Case Comprehensive Cancer Center at Case Western Reserve University. UH Case Medical Center is the 2012 recipient of the American Hospital Association – McKesson Quest for Quality Prize for its leadership and innovation in quality improvement and safety. For more information, go to www.uhhospitals.org