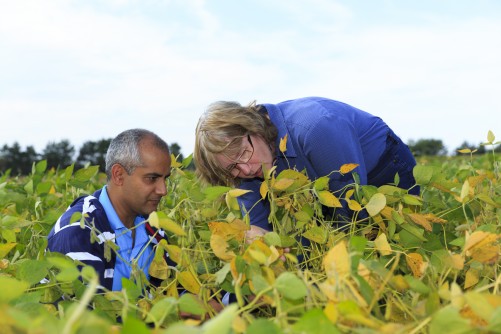 Doctoral student Arjun Kafle and professor Heike Bücking of the South Dakota State University Department of Biology and Microbiology examine soybeans to explore the complex interactions between plants and beneficial microorganisms that improve the nutrient uptake and stress resistance of crops. 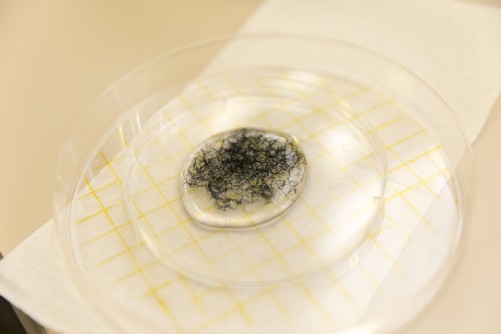 Plant roots are stained and examined for mycorrhizal colonization under the microscope.

Newswise — An ancient, mutually beneficial relationship between plants and fungi could make agriculture more sustainable by reducing the need for chemical fertilizers, according to professor Heike Bücking of the South Dakota State University Department of Biology and Microbiology. For more than 500 million years, the majority of land plants have shared their carbohydrates with arbuscular mycorrhizal fungi that colonize their root systems, Bücking explained. In exchange, these fungi provide plants with nitrogen and phosphorous, and improve the stress resistance of their host. These fungi are seen as living fossils and explore the soil with its hyphae in the search for nutrients, and deliver these nutrients to its host. As reward the host plant transfers anywhere from 4 to 20 percent of its photosynthetically fixed carbon to these mycorrhizal symbionts. “We think these fungi have the potential to increase the biomass production of bioenergy crops and the yield of food crops and do so in a more sustainable and environmentally friendly way,” said Bücking. She studies these interactions in food and bioenergy crops including wheat, corn, soybeans, alfalfa, clover and perennial grasses, such as prairie cordgrass. Her research has been supported by the National Science Foundation, South Dakota Wheat Commission, Sun Grant Initiative, Soybean Research and Promotion Council and the U.S. Department of Energy - Joint Genome Initiative.

Defining plant-fungi relationshipsSupply and demand determine the amount of nutrients that plant and fungi exchange in this mutualistic relationship, according to Bücking. To unravel these complex interactions, she collaborates with researchers at the Vrije Universiteit in Amsterdam and the University of British Columbia as well as other South Dakota Agricultural Experiment Station researchers. “Though a host plant is colonized by multiple fungi species simultaneously, the plant knows exactly where certain benefits are coming from. The host plant can distinguish between good and bad fungal behavior and allocates resources accordingly,” she said, noting that the host plant transfers anywhere from 4 to 20 percent of its photosynthetically fixed carbon to mycorrhizal fungi. These fungi also form common mycorrhizal networks that give them access to multiple hosts. Her research showed that when host plants were shaded and thus decreased their carbohydrate allocation, fungi responded by reducing their nutrient share.

However, those that benefit one crop may not provide the same nutrients or benefits to another crop species, she cautioned. “Even different isolates of one fungal species can behave differently, and it will be necessary to identify fungi that are optimally adapted to their specific environment and host plant to get the highest plant benefit.

Adapting to stressorsIn addition to providing nutrients, these fungi can protect food and bioenergy crops from environmental stresses, such as drought, salinity and heavy metals, and diseases, Bücking explained. “All the stresses that a plant can potentially be exposed to are generally improved by mycorrhizal interactions.”

Increasing tolerance through conventional breeding generally targets only one specific stress factor, but crops are often subjected to multiple stresses simultaneously, she pointed out. “These fungi, if used efficiently, can provide the plant with an improved resistance against stresses that are often difficult for us to predict.” However, she added, more research is necessary to better understand how this ancient symbiosis between land plants and fungi can be used to its full potential.