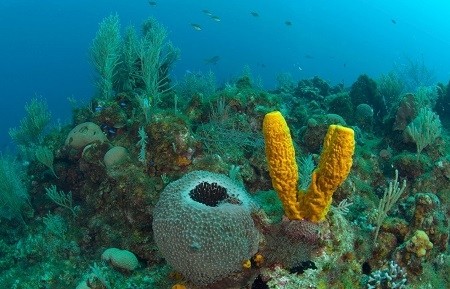 The perspective, published by the American Association for the Advancement of Science (AAAS)’s Center for Science & Diplomacy, uses the interconnectivity of coral reefs in the Caribbean as an example of how scientists working together can enhance conservation benefits for their countries, protect Earth’s critical ecosystems and combat climate change while encouraging diplomacy among governments.

The article was written by Dr. William Kiene, former science coordinator of the National Oceanic and Atmospheric Administration (NOAA)’s Office of National Marine Sanctuaries who is currently a consultant to the UN Environmental Programme for the Caribbean, and Dr. Jorge Brenner, Executive Director of the Gulf of Mexico Coastal Ocean Observing System (GCOOS) and former Associate Director of Marine Science and Sustainable Fisheries with The Nature Conservancy.

“Countries have been using marine protected areas to conserve critical oceanic habitats and species for decades,” Brenner said. “But often, management strategies focus only a single protected area within a country’s own borders and not on the bigger international interconnectivity that can be crucial for conservation. Coral reefs in the Caribbean are a great example of this.”

About 25% of the ocean’s fish depend on healthy coral reefs, using them for shelter, food, reproduction and as nursery habitats. But reef benefits go beyond supporting healthy fish populations. Worldwide, over half a billion people depend on reefs for food, income, and protection from storm events such as hurricanes and tropical storms. In the Caribbean, an estimated 100 million people benefit from coral reefs, including 41 million people who are believed to be highly dependent on reefs for food or their livelihoods.

“Research shows us that the Caribbean reefs are all interconnected,” Brenner said. “To reproduce, corals simultaneously release millions of tiny sperm and eggs, which float on ocean currents until they settle to continue growing. Based on oceanic circulation patterns, we can see that eggs and sperm from a reef in Cuban waters can travel to reefs in the Florida Keys or off Texas and settle there. This interplay is critical for genetic diversity and helps to sustain resilient coral reef communities.”

Frameworks for countries to work together on shared conservation measures already exist.

“In 2015, the U.S. and Cuba signed a joint accord to work together on the research and management of their marine protected areas, but that accord has never been implemented,” Kiene said. “We think it’s time to revive a formal collaboration that recognizes the interdependence of these areas, along with the idea that both the U.S. and Cuba would reap the benefits of working together. And that’s true for the wider Caribbean as well. By engaging in the international science and embracing our common interests, not only will we be protecting the Earth’s special places, we’ll also foster more productive and resilient relationships among nations.”