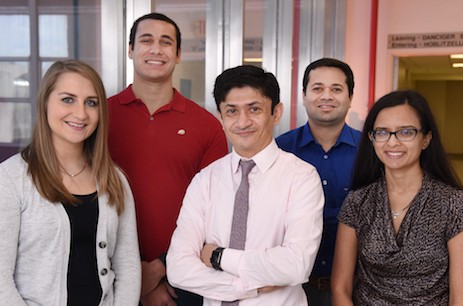 Dr. Patel is senior author of a study describing research that led to the drug’s development, published online today in Nature Communications.

Affecting about 600,000 people in the U.S., autosomal dominant polycystic kidney disease (ADPKD) causes numerous fluid-filled cysts to form in the kidney. An affected kidney, normally the size of a human fist, sometimes grows as large as a football. As their numbers and sizes increase, these cysts eventually interfere with the kidney’s ability to filter blood and remove bodily waste. The cysts can quietly grow for decades until symptoms appear such as blood in the urine, Dr. Patel said. About half of those affected with ADPKD suffer kidney failure by age 60, according to the National Kidney Foundation.

“There isn’t a single drug on the U.S. market right now to treat the disease,” Dr. Patel said. “Once your kidneys fail, your only option for survival is to get a transplant or start dialysis.”

In 2009, Dr. Patel began searching for microRNAs that might underlie progression of ADPKD. MicroRNAs – or MiRs for short – are tiny RNA fragments that interfere with normal gene expression.

Proof that such RNA fragments even existed came in the early 1990s; their presence in humans was first reported in 2000. Those discoveries led to a groundswell of interest in developing drugs to treat diseases caused by microRNAs, Dr. Patel said – in part because the process can be straightforward once the problem-causing fragment is identified.

“Because miRs are so small, drugs can easily be designed against them. And since we know the nucleotide sequence of every known microRNA, all that is required is to prepare an anti-miR with a sequence that is exactly the opposite of the miR’s,” he said.

In this study, researchers in Dr. Patel’s lab focused on microRNA cluster 17~92 following identification of potential miR targets. A National Institutes of Health grant funded the UTSW research. In 2013, Dr. Patel and fellow researchers reported in Proceedings of the National Academy of Sciences that this microRNA cluster indeed appeared to promote kidney cyst growth.

Using four mouse models, the researchers next studied whether inhibiting this microRNA could slow cyst growth and thus delay ADPKD progression. They found that genetically deleting microRNA-17~92 slowed cyst growth and more than doubled the life spans of some mice tested.

Based on that finding, Dr. Patel’s lab collaborated with Regulus Therapeutics to test an anti-microRNA-17 drug. The test drug slowed the growth of kidney cysts in two mouse models and in cell cultures of human kidney cysts, the study showed.

Funding was provided by the National Institutes of Health (NIH) and the PKD Foundation. Research reported in this publication was supported by the National Institute of Diabetes and Digestive and Kidney Diseases of the NIH under Award Number R01DK102572. The content is solely the responsibility of the authors and does not necessarily represent the official views of the NIH.

UT Southwestern and Regulus Therapeutics have applied for a patent for treatment of polycystic kidney disease with miR-17 inhibitors. In addition, Dr. Patel’s laboratory has a sponsored research agreement with Regulus, and Dr. Patel serves as a consultant for Regulus.

About UT Southwestern Medical CenterUT Southwestern, one of the premier academic medical centers in the nation, integrates pioneering biomedical research with exceptional clinical care and education. The institution’s faculty includes many distinguished members, including six who have been awarded Nobel Prizes since 1985. The faculty of almost 2,800 is responsible for groundbreaking medical advances and is committed to translating science-driven research quickly to new clinical treatments. UT Southwestern physicians provide medical care in about 80 specialties to more than 100,000 hospitalized patients and oversee approximately 2.2 million outpatient visits a year.