21-Jun-2017 10:05 AM EDT, by University of Texas Health Science Center at Houston
favorite_border 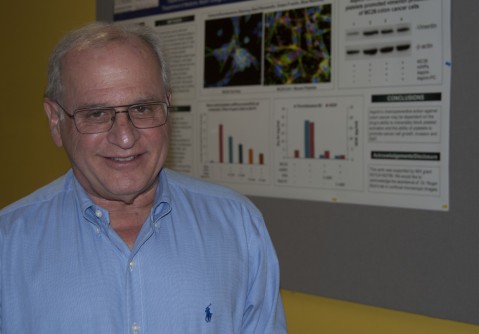 UTHealth’s Lenard Lichtenberger, Ph.D., is working to reduce the side effects of aspirin.

Newswise — Scientists at The University of Texas Health Science Center at Houston (UTHealth) are testing the effectiveness of a soy-enriched aspirin formulation designed to fight colorectal cancer with fewer side effects.

Lenard Lichtenberger, Ph.D., professor of integrative biology and pharmacology at McGovern Medical School at UTHealth, is the principal investigator for the preclinical study funded with a $1.9 million grant from the National Cancer Institute (NCI). The grant was awarded to PLx Pharma Inc., the specialty pharmaceutical company developing this new form of aspirin.

While aspirin reduces the risk of colorectal cancer, daily use can cause ulcers and stomach bleeding. Colorectal cancer is a leading cause of cancer death in the United States claiming more than 50,000 lives in 2013, according to the Centers for Disease Control and Prevention.

First synthesized more than a century ago and hailed as a wonder drug, aspirin has been long known to reduce a person’s likelihood of heart disease and stroke. But, the research into its cancer protection benefits is relatively new.

The research into the chemopreventive action of aspirin is so conclusive that the U.S. Preventive Services Task Force recommends that people between the ages of 50 and 69 take low-dose aspirin on a daily basis to prevent colorectal  cancer so long as they consult with their physician first.

“We want to learn more about the link between aspirin and colorectal cancer,” said Lichtenberger, who developed the compound being tested in conjunction with colleagues at PLx Pharma Inc. The Food and Drug Administration approved drug is called Aspertec™ and it works by reducing damage to the lining of the gastrointestinal tract.

Lichtenberger’s team will be testing the cancer protective properties of both aspirin and Aspertec™ as well as the effects of the medications on the lining of the gastrointestinal tract.

Previously reported research by Lichtenberger and his colleagues revealed how Aspertec™ slows platelet development in preclinical models of colorectal cancer.

Lichtenberger and Kopetz are on the faculty of The University of Texas MD Anderson Cancer Center UTHealth Graduate School of Biomedical Sciences at  Houston.