Wave Beams Mix and Stir the Ocean to Create Climate 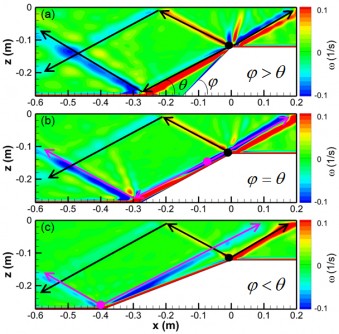 Newswise — WASHINGTON, D.C., June 20, 2017 -- Ocean circulation patterns have a profound effect on global climate. Waves deep within the ocean play an important role in establishing this circulation, arising when tidal currents oscillate over an uneven ocean bottom. The internal waves that are generated by this process stir and mix the ocean, bringing cold, deep water to the surface to be warmed by the sun.

This week in the journal Physics of Fluids, from AIP Publishing, investigators from the South China Sea Institute of Oceanography report how to tell which way internal waves will go. The proposed theory unifies several previously understood explanations of wave propagation.

Without these internal waves, deep ocean circulation would shut down and the oceans would become stratified into warm water layered over permanently cold deep water. As the tides sweep water back and forth over the ocean bottom every day, many waves are created that stretch vertically from the ocean bottom to the surface of the sea.

The repetitive motion of these tidal oscillations causes the vertical waves to superimpose, or accumulate, until a so-called “wave beam” forms. This composite wave transports water from the ocean depths to the surface and behaves somewhat like a beam of light -- hence its name.

The hills, ridges and valleys of the ocean bottom play a key role in the generation of wave beams. The boundary of a continental shelf, presenting a sharp edge or break in the slope, is also important in this process. A key parameter involves two angles, one being the angle the ocean bottom makes with the horizontal, and the other, the wave beam itself.

If the ocean bottom slope angle is less than the wave beam angle, the situation is “subcritical”. A “supercritical” situation arises when the topographic slope exceeds the wave beam angle. A “critical” situation exists when the two angles match. The work reported in Physics of Fluids explores the generation of internal waves in all three cases and explains of wave beams direct themselves. The accompanying figure shows typical results from the published simulations.

The existence of wave beams transverse to the ocean bottom topography has been controversial and recent explanations for these are inadequate. The present study was carried out to clarify the literature.

The investigators encountered a somewhat surprising result for the beam lying on a critical slope. The origin point for wave beams (magenta dot in panel (b) of the figure) is near, but still some distance down from, the abrupt break in the continental shelf. Theoretically, internal waves should be generated along the entire down-slope, so it is not clear why beams should originate from this one mysterious place. Future research will focus on determining why this feature arises and what it means for simulations of this important global phenomenon.