We Need a Better Influenza Vaccine

Ted Ross, the Georgia Research Alliance Eminent Scholar of Infectious Diseases and director of the Center for Vaccines and Immunology, is developing a new universal flu vaccine that could change the way we fight influenza. 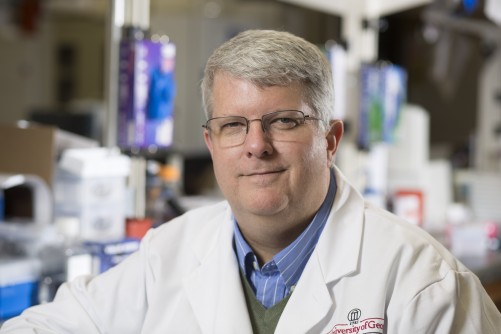 Tedd Ross at UGA says there needs to be a better flu vaccine.

Newswise — The good news is that the flu season appears to be slowing down, but it’s already taken a serious toll.

Almost every state has reported widespread flu activity for several weeks straight. Hospitals in many parts of the country have been loaded with patients, and pharmacies struggled to keep enough medicine in stock.

In a bad year, influenza kills more people in this nation than motor vehicle accidents. During the 2014-2015 season, for example, 34 million people were infected, 710,000 were hospitalized and about 56,000 died from influenza in the U.S. alone.

The influenza virus was also responsible for one of the deadliest natural disasters in human history: the 1918 influenza pandemic. Estimates vary, but most agree that the pandemic killed up to 100 million people—about 10 times the number of soldiers killed in World War I and roughly one out of every 20 people on the planet.

As we prepare to mark the centennial of this event, it is important to remember that despite all our medical advances, the influenza virus is still a vicious killer. Vaccines are the best way to prevent transmission of the virus, but they are not always well matched to the circulating strains.

It takes many months and considerable amounts of money to make the annual seasonal influenza vaccine. The vaccine strains are selected eight to nine months in advance of the next influenza season and the manufacturing process cannot quickly pivot to a new vaccine if a new strain emerges during that time period.

You can imagine the different strains of influenza virus as cards in a deck. We monitor for all the different cards that circulate during a game and try our best to predict what hand will be dealt when influenza virus season arrives during the winter months. Unfortunately, the virus can mutate quickly and we are dealt a wild card.

I still encourage everyone who can to get the vaccine because even partial protection is better than no protection at all. But if we really want to prevent deaths, we need new tools in the fight against influenza.

For the past several years, my laboratory at the University of Georgia has partnered with Sanofi Pasteur, the world’s largest manufacturer of influenza vaccines, to create what is commonly known as a universal vaccine.

A universal influenza vaccine would target most, if not all, influenza viruses and provide flu protection by training the human immune system to defend itself against a large number of viral strains. Ideally, this is a shot you would only have to get once or every few years, much like the vaccines used to prevent mumps, polio or smallpox.

The technique we use in my laboratory is called COBRA, which is short for computationally optimized broadly reactive antigen. We use computers to compile all the possible iterations of a particular protein on the surface of the influenza virus, known as hemagglutinin, and then bundle them into a single molecule. It’s a bit like taking every novel in your local library and combining them into one giant book.

And we’ve already seen a lot of success. The first vaccine was designed to protect against almost every form of influenza in the H1N1 subtype that have been around for the last 100 years. It protected mice and ferrets from every form of H1N1 influenza virus that we could throw at them, including the strain that caused the 2009 pandemic swine flu outbreak. We recently demonstrated that this same approach was effective against all co-circulating strains of H3N2 viruses over four influenza seasons.

Using the COBRA technology, we have demonstrated that we can protect against both seasonal influenza viruses as well as pre-pandemic strains, such as H5N1 and H7N9, known as bird flu.

To truly test the success of these broadly protective universal vaccines, we are working to refine this approach, and we plan to begin human clinical trials in the near future.

The COBRA technology also shows promise beyond influenza virus, and it could be an effective method to develop vaccines against HIV, dengue fever and Ebola viruses.

It’s difficult to overstate the complexities involved in creating a universal vaccine. I’ve been working on the problem for nearly 20 years, but we’re so very close. We need more support for this kind of work, because the current standards just aren’t working well enough.

—By Ted M. Ross, Ph.D., the Director of the Center for Vaccines and Immunology and Georgia Research Alliance Eminent Scholar and Professor of Infectious Diseases at the University of Georgia.

He may be reached at  [email protected]