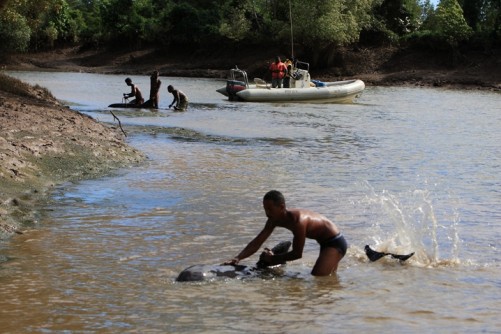 In May-June of 2008, the Wildlife Conservation Society led an international stranding response team to a mass stranding of approximately 100 melon-headed whales in the coastal mangroves of northeastern Madagascar. 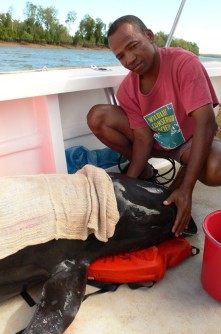 WCS researchers and other stranding team members worked to capture some of the melon-headed whales in order to transport them to the open ocean. 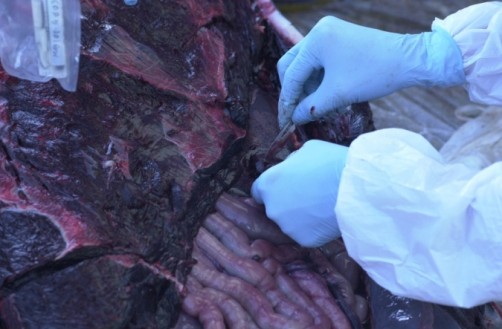 As part of the stranding response, wildlife health experts from WCS and other groups conducted necropsies on dead whales to determine the cause of death.

Newswise — An independent scientific review panel has concluded that the mass stranding of approximately 100 melon-headed whales in the Loza Lagoon system in northwest Madagascar in 2008 was primarily triggered by acoustic stimuli, more specifically, a multi-beam echosounder system operated by a survey vessel contracted by ExxonMobil Exploration and Production (Northern Madagascar) Limited.

In response to the event and with assistance from IFAW, WCS led an international stranding team to help return live whales from the lagoon system to the open sea, and to conduct necropsies on dead whales to determine the cause of death.

According to the final report issued today, this is the first known marine mammal mass stranding event of this nature to be closely associated with high-frequency mapping sonar systems. Based on these findings, there is cause for concern over the impact of noise on marine mammals as these high-frequency mapping sonar systems are used by various stakeholders including the hydrocarbon industry, military, and research vessels used by other industries.

The report concluded: “The potential for behavioral responses and indirect injury or mortality from the use of similar MBES [multi-beam echosounder systems] should be considered in future environmental assessments, operational planning and regulatory decisions.”

The full report can be found at: http://iwc.int/2008-mass-stranding-in-madagascar

The Wildlife Conservation Society (WCS) and the International Fund for Animal Welfare (IFAW) welcomed the report and praised all those involved in the process, including governments, NGOs, and industry.

“WCS and IFAW support these conclusions that add to a mounting body of evidence of the potential impacts of anthropogenic noise on marine mammals,” said Dr. Howard Rosenbaum, Director of the Ocean Giants Program for WCS. “Implications go well beyond the hydrocarbon industry, as these sonar systems are widely used aboard military and research vessels for generating more precise bathymetry (underwater mapping). We now hope that these results will be used by industry, regulatory authorities, and others to minimize risks and to better protect marine life, especially marine mammal species that are particularly sensitive to increasing ocean noise from human activities. ”

Added Dr. John G. Robinson, Executive Vice President for Conservation and Science for WCS: “We greatly appreciate the efforts of the U.S. government agencies and authorities and the International Whaling Commission for facilitating and overseeing this process, and we are particularly grateful to the Government of Madagascar for authorizing this work and their continued interest in the outcome. Understanding what causes mass strandings of marine mammals is critical to prevent this in the future. In this case, the cooperation by industry, conservation organizations, and government regulatory authorities led to best science being evaluated by an independent panel, which came up with conclusion based on weight of considerable evidence made available.”

“Mass stranding response is challenging under the best of circumstances. Together with local individuals and the government of Madagascar, we provided the expertise to rescue as many animals as possible and medical care to those that stranded alive,” said Katie Moore, Director of Animal Rescue at IFAW. “Equally important was to gather as much data as possible from the animals to address the root cause of the stranding. We are pleased to see the ISRP report and its conclusions, which will hopefully be used in shaping future conservation policies.”

The report was written after a formalized process was established to investigate the mass stranding. The process was undertaken with endorsement of the Government of Madagascar. Several have contributed to this report including organizations involved in the mass stranding response effort, the International Whaling Commission, and several relevant U.S. federal agencies.

While aspects of the stranding remain unknown, the panel concluded that a multi-beam echosounder system, operated intermittently by a survey vessel moving down the shelf-break the day before the event was the most “plausible and likely behavioral trigger for the animals initially entering the lagoon system.” 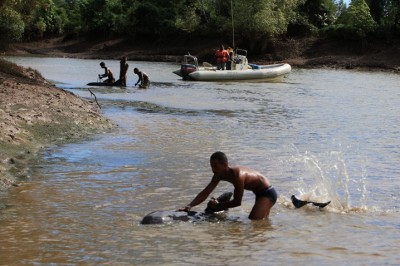 Caption: In May-June of 2008, the Wildlife Conservation Society led an international stranding response team to a mass stranding of approximately 100 melon-headed whales in the coastal mangroves of northeastern Madagascar. 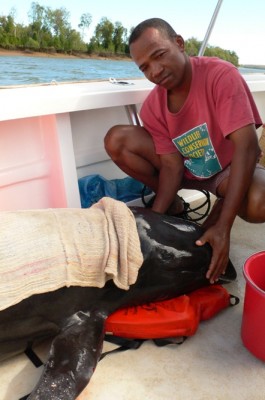 Caption: WCS researchers and other stranding team members worked to capture some of the melon-headed whales in order to transport them to the open ocean. 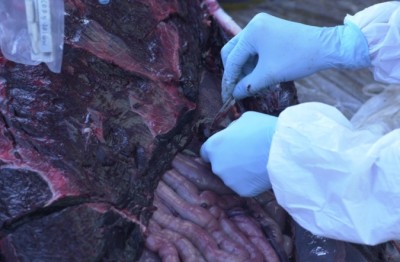 Caption: As part of the stranding response, wildlife health experts from WCS and other groups conducted necropsies on dead whales to determine the cause of death.