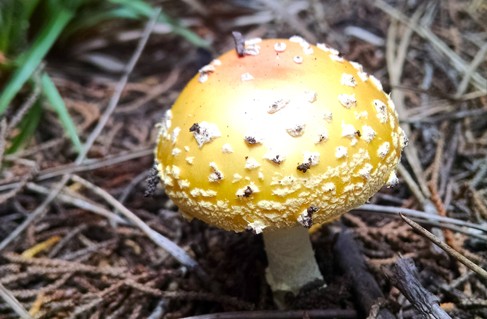 Amanita muscaria fungus growing in a high elevation conifer forest in Hawaii. We can see much of this mushroom above ground, but it has an incredible structure under ground as well.

Those who know soil understand the biodiversity lurking within. And that includes the honey fungus, the largest terrestrial organism.

The honey fungus gets its size from its ability to fuse into a single organism. Soil scientist Jesse Morrison, from Mississippi State University, explains: “When mycelia from different individual honey fungus bodies meet, either in or on the soil surface, they can attempt to fuse to each other. The fungi must be genetically identical honey fungi. When the mycelia successfully fuse to each other, they link very large fungal bodies together. This, in turn, changes extensive networks of fungal ‘clones’ into a single individual.”

Follow SSSA on Facebook at https://www.facebook.com/SSSA.soils, Twitter at SSSA_Soils. SSSA has soils information on www.soils.org/discover-soils, for teachers at www.soils4teachers.org, and for students through 12th grade, www.soils4kids.org.

The Soil Science Society of America (SSSA) is a progressive international scientific society that fosters the transfer of knowledge and practices to sustain global soils. Based in Madison, WI, and founded in 1936, SSSA is the professional home for 6,000+ members and 1,000+ certified professionals dedicated to advancing the field of soil science. The Society provides information about soils in relation to crop production, environmental quality, ecosystem sustainability, bioremediation, waste management, recycling, and wise land use.