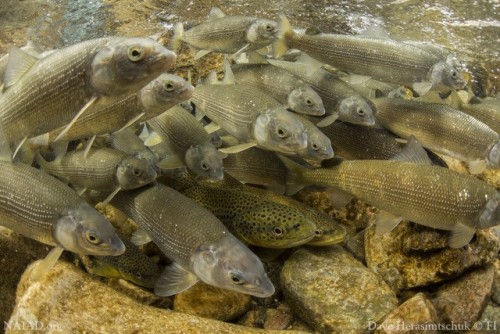 Fish communities are composed of species with diverse responses to environmental change. 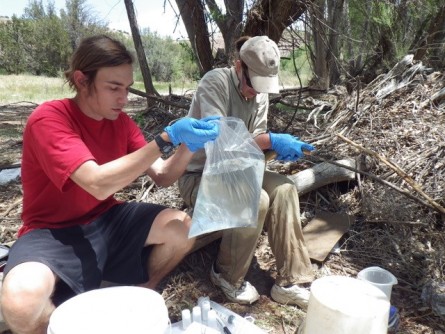 As humans build roads, construct buildings and develop land for agriculture, freshwater ecosystems respond ― but not always in the ways one might expect.

Newswise — A new study by the University of Washington and Simon Fraser University finds that some fish lose out while others benefit as urban and agricultural development encroaches on streams and rivers across the United States. Having a diversity of species, each with different land-use sensitivities and ecological functions, helps buffer ecosystems from failing in the face of development. The findings were published online in December in Global Change Biology.

"Human activities operating across the landscape don't randomly impact biodiversity, that is, species survival is not determined by a flip of the coin. Species have different traits and ecologies that determine their sensitivity environmental change," said co-author Julian Olden, a UW associate professor of aquatic and fishery sciences.

"Our research suggests that every player in a community is important, to varying degrees, for ecosystem functioning into the future." This study is the first to take a national-level look at the effects that land-use changes can have on a major ecosystem role that freshwater fishes serve in streams and rivers. The authors analyzed data on more than 500 fish species taken from about 8,100 locations within streams across the U.S. The authors specifically looked at the magnitude of nutrient recycling by fish, either by urinating or excreting through their gills. In any given stream, important nutrients like phosphorous and nitrogen that keep the ecosystem healthy are locked up in the bodies of plants and animals. When fish eat, they acquire some of these nutrients from prey and excrete the rest back into the water, essentially serving as giant recyclers in the ecosystem. The researchers took data on the amount of nutrient recycling by different fish species, then paired that with fish populations in each area to map the geography of recycling occurring in streams and rivers across the entire U.S. Once they identified and counted the fish that contribute the most nutrients in any given stream, they were able to use predictive models to forecast what would happen to these ecosystems if urbanization increased into the future. Broadly, they found that having a diversity of species appears to help ecosystems maintain balance.

"Our study suggests that natural communities can be more resistant to human impacts than we previously thought," said lead author Jonathan Moore, an associate professor of biological sciences at Simon Fraser University who earned his doctorate in fisheries from the UW.

"I think our study really emphasizes the messy reality of ecosystems and how species aren't lost in isolation. While some species can be sensitive, others may be tolerant. This messy reality can buffer ecosystems against degradation."

The analysis did show clear patterns in the types of fish that were most helpful to buffer ecosystems from environmental change. Larger fish such as suckers and catfish can store and excrete more nutrients, thus contributing to a stream's biological productivity. Additionally, non-native fish like many large-bodied sport fish that moved from one U.S. coast to the other also generally survive better in the midst of land-use changes and thus were buffers for the ecosystem. "There are a lot of good reasons why we should try to stem the spread of non-native fish, but the reality is communities are shifting rapidly with global change, and species from other locations are playing an increasing role in ecosystems," Moore said. Although the researchers recognize the potential ecological damages caused by some non-native fishes, they point to their growing importance in freshwater rivers and streams in buffering against environmental degradation. In the western states, more than half of the fish species in rivers and streams are non-native. "The reality is, many of these non-native species are here to stay, and we found they do serve an important ecosystem role," Olden said. "It's important to recognize that species of all origins are playing a role in how communities function." This research was funded by the UW and Simon Fraser University.