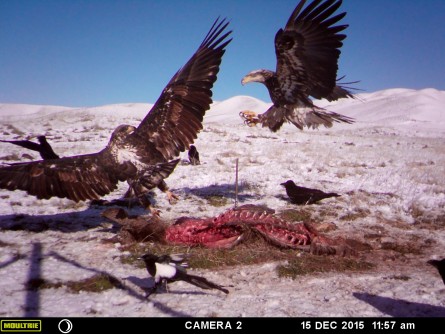 Golden eagles jostle for a chance at an easy meal. 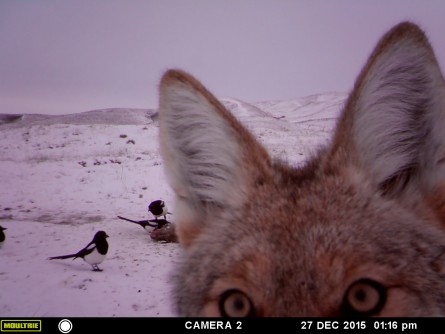 A fox takes a "selfie" in the Idaho mountains. 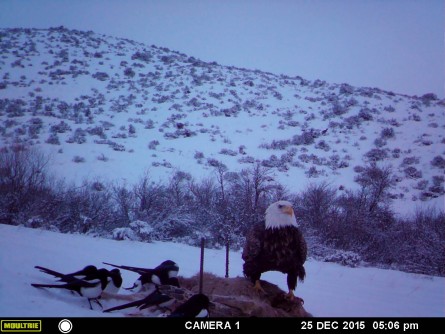 A bald eagle shares his bounty with magpies. 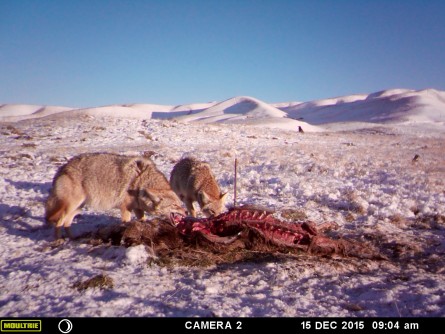 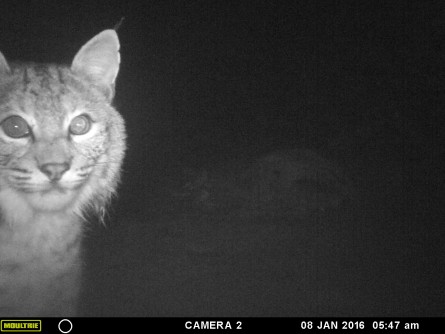 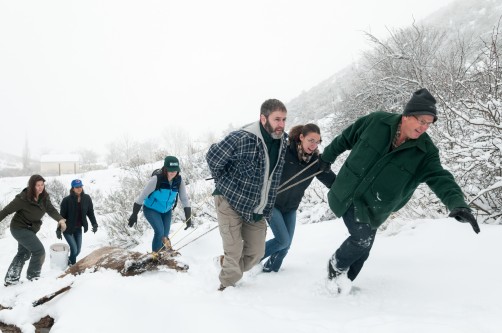 Todd Katzner, left, and Greg Kaltenecker drag an elk carcass through the snow to the site of the camera trap.

Golden eagles jostle for a chance at an easy meal.

Newswise — For wildlife biologists Todd Katzner and Greg Kaltenecker, it’s just another day at the office: grab a cup of coffee, fill out a few reports, then drag a 250-pound elk carcass uphill through more than a foot of fresh powder.

Katzner, a research wildlife biologist for the U.S. Geological Survey (USGS), and Kaltenecker, executive director of Boise State University’s Intermountain Bird Observatory, have teamed up with the Idaho Department of Fish and Game to create a series of motion-sensitive camera traps to monitor golden eagle migration and distribution in southwest Idaho.

As a bonus, they’ve also been able to gather data on a variety of other scavengers drawn to road-killed game staked out at the study sites. When animals show up to take the bait, the camera begins clicking away, capturing candid images of a surprising variety of wildlife.

After dragging the carcass into place, the team quickly began cutting into the hide to expose raw flesh to scavengers unlikely to rip through the thick fur on their own. They then set about running wire through the animal’s ribs and back to a length of rebar pounded into the ground, to ensure that larger predators didn’t haul the prize off to a location out of camera range.

This specific site, just 10 miles from downtown Boise, is one of hundreds set up by Katzner over the past decade, primarily across the Eastern United States, and the first in Idaho. More than 4 million wildlife images have been captured by the project to date. At this site, the camera has recorded golden eagles, bald eagles, black-billed magpies, common ravens, raccoons, foxes, coyotes and even bobcats.

While the data from one camera are enlightening, allowing a glimpse of the diversity and density of animals in a single spot, Katzner said images gathered from multiple cameras help stitch together the story in a larger context. As researchers view data from various sites they can begin to compare the frequency and daily and seasonal timing of visits from various species and estimate the number of individuals in an area.

Because there are so many sites across the U.S., from Maine to Florida to Oklahoma, it’s impossible for Katzner to pay for staff to trek in, replace the bait and download camera images — a task that has to be performed at least once per week. So he relies heavily on volunteers.

That makes the project a logical fit for the Intermountain Bird Observatory, which already depends on students and community volunteers to gather and disseminate information on a variety of migratory bird species.

“I can see countless opportunities in the future for volunteers and for students in our raptor biology program,” said Kaltenecker. “The project is local and fairly easy to do, and you get immediate results.”

Katzner has published a couple of scientific papers to fit his data into a larger context. “We are looking at the timing of arrival of specific species, and the links to migration, hunger and the amount of food available,” he said. “We also get some amazing natural history stories that contribute to our understanding of the biology of these species.”

One example is a photograph snapped in Pennsylvania showing a golden eagle whose face was covered in porcupine quills — an observation that would have been nearly impossible to record with any other technique.

Both men emphasize the key role played by state, federal and private partners like the Idaho Department of Fish and Game, which has provided access to state lands, permits for the use of road kill such as elk and mule deer, and even the carrion itself.

“We appreciate the opportunity to further the study of birds of prey in the local area through partnerships and collaborations,” Kaltenecker said. “IBO does a lot of outreach and we see partnerships like this as long-term relationships that help us tell the larger conservation story.

This particular site has since been closed down and additional locations are being developed. Katzner anticipates that information gleaned here in Idaho could help inform wildlife management decisions for years to come.