Women who Vape are More Likely to Have Low Birthweight Babies, Study Shows

Dr. Annette Regan, a UCLA Fielding School of Public Health assistant professor of epidemiology, led the research, which found that e-cigarettes are not a healthier alternative to smoking for expectant mothers

Women who vape are more likely to have low-birthweight babies, study shows 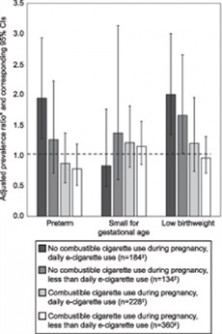 Newswise — LOS ANGELES (July 7, 2021) – Women who use electronic cigarettes during pregnancy are 33% more likely than those who don’t to give birth to low-birthweight infants, according to a new study by a team of researchers from UCLA and other institutions.

Low-birthweight babies — those weighing less than 5.5 pounds — often require specialized medical care and are at greater risk of early-life complications and long-lasting health issues, said Dr. Annette Regan, the study’s lead author and an assistant professor of epidemiology at the UCLA Fielding School of Public Health.

Findings from the study, which also involved researchers from the U.S. Centers for Disease Control and Prevention, are published in the July edition of the peer-reviewed journal Obstetrics & Gynecology.

The researchers analyzed data on approximately 80,000 mothers from the 2016­–18 Pregnancy Risk Assessment Monitoring System, or PRAMS, a CDC-coordinated project that collects information nationwide on maternal experiences before, during and shortly after pregnancy.

“Although only a small percentage of people used e-cigarettes, we were surprised with how many used both e-cigarettes and combustible cigarettes during pregnancy,” said Regan, who also teaches at the University of San Francisco’s nursing school. “We found increased rates of low birthweight for e-cigarette users, and this occurred even for those who didn't also smoke cigarettes.”

The team reported that among users of e-cigarettes, whether exclusively or in combination with regular cigarettes, the rate of low-birthweight births was 8.1%, compared with 6.1% for non-users — an increased prevalence of 33%. However, they also found that among those who vaped exclusively, low-birthweight births jumped to 10.6%, and the rate of preterm births was 12.4%, compared with 7.6% for non-users. These increases were not seen among dual users of e-cigarettes and regular cigarettes.

“These findings are important, since being born early means a baby has less time in the mother’s uterus to grow and gain weight,” Regan said. “Much of a baby’s weight is gained during the latter part of pregnancy.”

Nicotine, which is present in both regular and e-cigarettes, is considered a developmental toxicant by the CDC, one that can have a detrimental effect on fetal development. Because the researchers found that low birthweight was more common among women who used e-cigarettes frequently than among occasional users, it is possible that the amount of nicotine exposure is linked with these harmful effects. However, they said, more research is needed to confirm this.

"This study adds to the accumulating evidence that it is best to be nicotine-free during pregnancy and that e-cigarette use is no exception," said Prof. Gavin Pereira, a perinatal epidemiologist at the Curtin University School of Public Health in Australia. Pereira, formerly a professor of perinatal, pediatric, and environmental epidemiology at Yale University, did not participate in the study.

E-cigarette use has been increasing in the U.S., and these products are sometimes marketed as a less harmful alternative to cigarettes and a smoking-cessation aid. Despite this, very few studies have addressed the potential association between vaping and adverse birth outcomes among expectant mothers, the researchers said.

“The perception that e-cigarettes are less harmful than combustible cigarette smoking may contribute to their appeal among pregnant women who have difficulty quitting smoking,” Regan said. “These findings show that e-cigarettes should not be considered a safe alternative to regular cigarettes and that there are potentially very real health risks from vaping when it comes to pregnancy.”

The UCLA Fielding School of Public Health, founded in 1961, is dedicated to enhancing the public's health by conducting innovative research, training future leaders and health professionals from diverse backgrounds, translating research into policy and practice, and serving our local communities and the communities of the nation and the world. The school has 631 students from 26 nations engaged in carrying out the vision of building healthy futures in greater Los Angeles, California, the nation and the world.

Caption: Women who vape are more likely to have low-birthweight babies, study shows