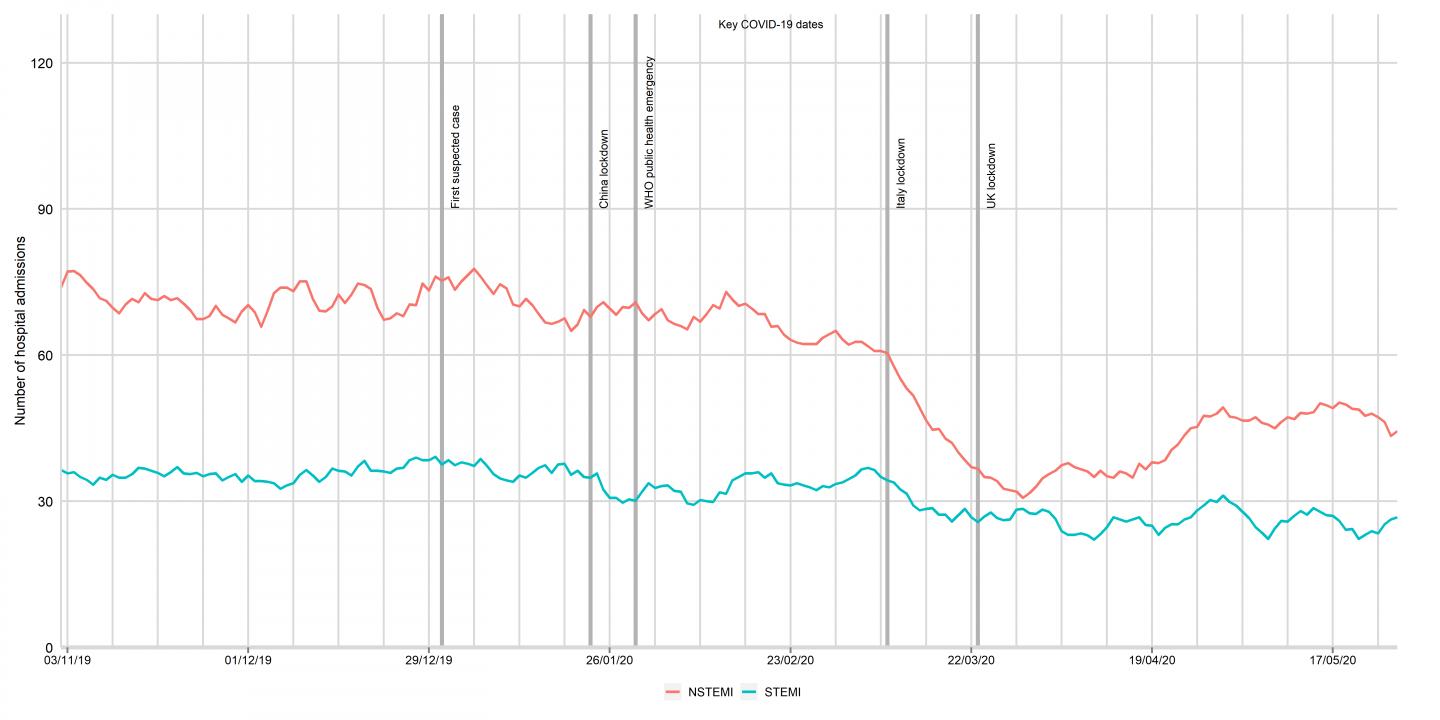 The graph shows the 7-day moving average for the number of people admitted to hospital for two types of heart attack: NSTEMI and STEMI. Key dates in the spread of the pandemic are also highlighted. Credit: University of Leeds

Newswise — The death rate for patients who experienced what is normally a lower-risk heart attack rose sharply during the peak of the COVID-19 pandemic in England, according to an analysis of NHS data.

In comparison, the death rate for people who had a more severe heart attack fell.

It also revealed a substantial drop in the number of people who were arriving at hospital with a heart attack. At its lowest point, hospitals were treating just over half the cases they would normally expect to see.

Although the number of people seeking medical help did rebound, they had not returned to their pre COVID-19 levels by 22 May, when the study period ended.

The reduction in patients seeking timely help is likely to have resulted in people dying at home or developing chronic heart problems.

Despite the pressures on the NHS from COVID-19, the study showed that hospitals were able to maintain their emergency cardiac services in the vast majority of cases and adhere to best-practice clinical guidelines.

The study is the first detailed insight into what happened to heart attack patients as the NHS reorganised services to focus on COVID-19. The investigation was only possible after Ministers sanctioned access to anonymised patient data.

Researchers analysed admission data for 50,689 patients who had a heart attack and were treated at 99 acute NHS hospitals in England over the 14 months prior to UK lockdown on 23 March, and the first two months of lockdown.

The study was endorsed by Sir Patrick Vallance, the Government's Chief Scientific Advisor. He wanted scientists to investigate how patients and healthcare providers responded during the peak of the pandemic to help inform future NHS planning.

The findings are published in the European Heart Journal - Quality of Care and Clinical Outcomes.

Dr Jianhua Wu, Associate Professor in Biostatistics at the University of Leeds and lead author of the study, said: "The data have given us a very detailed picture of the way patient behaviour changed as COVID-19 swept across Europe.

"It has revealed that although patients were able to get access to high levels of care, the study suggests a lot of very ill people were not seeking emergency treatment and that may have been an unintended consequence of the 'Stay at Home' messaging."

Chris Gale, Professor of Cardiovascular Medicine at the University of Leeds and senior author of the study, said: "This national picture provides evidence for the devastating impact that the COVID-19 pandemic has had on people's lives. The inflation in deaths among people attending hospital with heart attack is very likely an early signal of the mortality and morbidity that is yet to be observed.

"Notably, we have not seen a return to the normal rates of admissions with heart attack. This means that people may still be delaying seeking help."

"If you experience chest pain or discomfort, which may feel like squeezing or heaviness or tightness not necessarily the chest-clutching agony that we see on TV and which may radiate to your jaw, arm, back or stomach, it's important to understand you could be having a heart attack.

"Thanks to decades of research, prompt treatment for your heart attack could save your life, so if you think you are experiencing symptoms call 999 immediately."

What the study found

An NSTEMI is the most common form of heart attack and usually happens when there is a partial blockage to one of the blood vessels supplying the heart.

A STEMI heart attack is where there is a complete blockage of one of the blood vessels that takes oxygen to the heart.

The statistical analysis revealed that significantly fewer people were attending hospital with a heart attack. NSTEMI cases were down by 49 percent - and STEMI by 29 percent on what hospitals were expecting to see.

The graph with this story shows the 7-day moving average for the number of people admitted to hospital for two types of heart attack: NSTEMI and STEMI. Key dates in the spread of the pandemic around the world are also highlighted.

If you re-produce the graph, please credit: University of Leeds

The decline in patients attending hospital started in early 2020 as China implemented lockdown measures and the World Health Organisation announced a public health emergency. And that decline continued through the early part of the lockdown in the UK.

The smallest number of cases was seen on 19 April where the 99 hospitals recorded 60 heart attack cases. They would normally expect to see around 104.

Professor Gale said: "It was not the case that people were not having heart attacks - they were deciding not to go to hospital. Some were undoubtedly heeding the message to stay at home, others might have been afraid of picking up the virus in hospital or were trying to shield because they had other conditions.

"The study has revealed that patient behaviour was beginning to shift as reports emerged of the pressure COVID-19 was having on other healthcare systems.

"But a heart attack is a medical emergency and if people do not seek help, they die or go on to develop heart failure. We need to make sure people are aware that emergency services continued to operate."

The analysis showed that by 22 May, the number of heart attack cases that hospitals were seeing had not returned to pre-lockdown levels.

For patients experiencing a STEMI heart attack, the preferred treatment is primary percutaneous coronary intervention, where a balloon inside a catheter is inserted into the artery to clear the blockage. The NHS was able to maintain the treatment in the vast majority of cases. A small number, 0.3 percent, were treated with clot-busting drugs instead.

Most of the patients having an NSTEMI heart attack were able to have coronary angiography, a technique that uses dyes and x-rays to pinpoint exactly where blood vessels are obstructed. But in an additional three percent of cases that did not happen.

People dying within a month of a heart attack

In the month after lockdown started, the proportion of patients who had an NSTEMI heart attack and died within a month went from 5.4 percent to 7.5 percent, an increase of 39 percent. It dropped back to 5 percent over the following four weeks.

During the same period, patients who had a STEMI heart attack, the 30-day mortality figure dropped from 10.2 percent to 7.7 percent, a 25 percent reduction. Over the subsequent four weeks, it increased slightly to 8.3 percent.

As a statistical analysis, the study cannot identify the precise reasons for the fluctuation in the death rates but it is believed to be linked to the fall in patients seeking help, particularly among NSTEMI patients who may not display the classic symptoms of a heart attack such as chest pain.

Professor Gale said: "We can only speculate as to why there has been an increase in deaths among patients with NSTEMI, despite good care in hospital. It is possible that these patients had the COVID19 infection which contributed to their death."

What the findings mean for healthcare planning

Professor Gale said the study showed that emergency cardiac services were able to maintain their effectiveness during the peak of the pandemic. But he warned: "There is little doubt that the substantial drop in admissions to hospital with heart attack will have had substantial repercussions on population health outcomes.

"People will have died or developed heart failure as a result of not seeking treatment for their heart attack. The NHS now needs to be ready to support those who did not attend hospital."