Lessons from the Spanish Flu: Cities that Enacted Early Isolation, Other Restrictions Had Significantly Lower Rates of Disease and Mortality

Newswise — MAYWOOD, IL—Large events are cancelled, restaurants and non-essential businesses are closed, and in many states, residents have been asked to shelter in place, all to limit the spread and impact of the COVID-19 virus. But are strict and early isolation and other preventative mandates really effective in minimizing the spread and impact of a disease outbreak?

Stefan E. Pambuccian, MD, a Loyola Medicine cytologist, surgical pathologist and professor and vice chair of the Department of Pathology and Laboratory Medicine at Loyola University Chicago Stritch School of Medicine, has reviewed published data and research from three papers dating back to the 1918-19 Spanish flu pandemic, which infected one-fifth to one-third of the world’s population and killed 50 million people.

According to the data and analysis, cities that adopted early, broad isolation and prevention measures—closing of schools and churches, banning of mass gatherings, mandated mask wearing, case isolation and disinfection/hygiene measures—had lower disease and mortality rates. These cities included San Francisco, St. Louis, Milwaukee and Kansas City, which collectively had 30 to 50% lower disease and mortality rates than cities that enacted fewer and later restrictions. One analysis showed that these cities also had greater delays in reaching peak mortality, and the duration of these measures correlated with a reduced total mortality burden.

“The stricter the isolation policies, the lower the mortality rate,” says Dr. Pambuccian. He studied the Spanish flu, including prevention measures and outcomes, to help develop standards for staffing and safety in the cytology lab, where infectious diseases like the COVID-19 virus are diagnosed and studied at the cellular level. His broader article appeared online this week in the Journal of the American Society of Cytopathology.

Like today, not everyone in 1918 and 1919 thought the strict measures were appropriate or effective at the time.

An estimated 675,000 people died in the U.S. from the Spanish flu, “and there was skepticism that these policies were actually working,” says Dr. Pambuccian. “But they obviously did make a difference.”

In 1918, the world was still at war “with overcrowded barracks,” and much of the U.S. lived with “poverty, poor nutrition, poor hygiene, household/community-level crowding, and a lack of preparation of the population and decision makers due to cognitive inertia and poor medical and insufficient nursing care,” says Dr. Pambuccian.

“Although the world is a much different place than it was 100 years ago, the efficacy of the measures instituted during the 1918-19 pandemic gives us hope that the current measures will also limit the impact of the COVID-19 pandemic.”

About Loyola Medicine and Trinity Health

Loyola Medicine, a member of Trinity Health, is a quaternary care system based in Chicago's western suburbs that includes Loyola University Medical Center (LUMC), Gottlieb Memorial Hospital, MacNeal Hospital and convenient locations offering primary and specialty care services from more than 1,800 physicians throughout Cook, Will and DuPage counties. LUMC is a 547-licensed-bed hospital in Maywood that includes the William G. & Mary A. Ryan Center for Heart & Vascular Medicine, the Cardinal Bernardin Cancer Center, a Level 1 trauma center, Illinois's largest burn center, a certified comprehensive stroke center and a children’s hospital. Having delivered compassionate care for more than 50 years, Loyola also trains the next generation of caregivers through its academic affiliation with Loyola University Chicago’s Stritch School of Medicine and Marcella Niehoff School of Nursing. Gottlieb is a 247-licensed-bed community hospital in Melrose Park with 180 physician offices, an adult day care program, the Gottlieb Center for Fitness, the Loyola Center for Metabolic Surgery and Bariatric Care and the Loyola Cancer Care & Research facility at the Marjorie G. Weinberg Cancer Center. MacNeal Hospital is a 374-licensed-bed teaching hospital in Berwyn with advanced inpatient and outpatient medical, surgical and psychiatric services, including acute rehabilitation, an inpatient skilled nursing facility and a 68-bed behavioral health program and community clinics. MacNeal has provided quality, patient-centered care to the near west suburbs since 1919. For more information, visit loyolamedicine.org.

Trinity Health is one of the largest multi-institutional Catholic health care delivery systems in the nation, serving diverse communities that include more than 30 million people across 22 states. Trinity Health includes 92 hospitals, as well as 106 continuing care locations that include PACE programs, senior living facilities, and home care and hospice services. Its continuing care programs provide nearly 2 million visits annually. Based in Livonia, Mich., and with annual operating revenues of $19.3 billion and assets of $27 billion, the organization returns $1.2 billion to its communities annually in the form of charity care and other community benefit programs. Trinity Health employs about 129,000 colleagues, including about 7,500 employed physicians and clinicians.

Journal of the American Society of Cytopathology

Just a few weeks ago, some sounds like "s" and "th" were difficult to pronounce for 6-year-old Owen McKay, who was diagnosed with an articulation disorder when he was 4 years old. Now, he can say them both well, thanks to his daily tutoring sessions with a McGovern Medical School student. 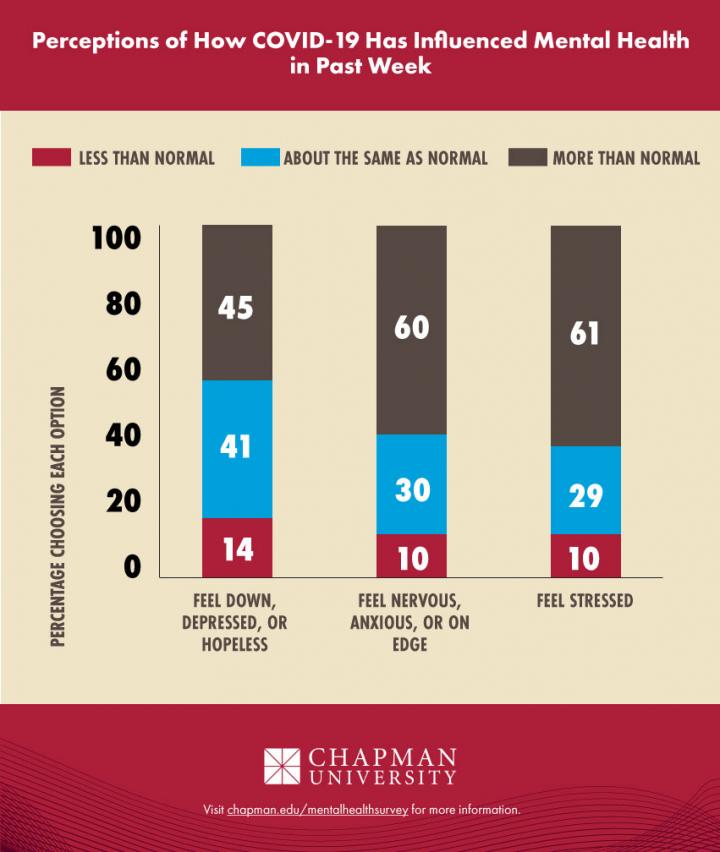 The Chapman University National COVID-19 and Mental Health Survey provides an in-depth look at the experiences of 4,149 adults living in the United States.

As a leading New Jersey academic medical center and member of Hackensack Meridian Health, Jersey Shore University Medical Center is able to provide its patients access to existing clinical trials and the latest medical techniques in a variety of specialties. Currently, the medical center is recruiting individuals who have been clinically diagnosed with COVID-19 or have laboratory test results showing they have COVID-19 antibodies to donate their blood and potentially assist patients in their recovery from the virus.

Your doctor's ready: Please log in to the videoconference

The coronavirus has prompted many medical centers to switch from in-person appointments to video visits. A new study from UCSF Benioff Children's Hospitals suggests that for some hospitals, video visits may become a permanent feature of the patient-provider landscape.

A Purdue University data science and machine learning innovator wants to help organizations and users get the most for their money when it comes to cloud-based databases.

Universally screening pediatric patients for COVID-19 before they undergo surgical procedures has allowed hospitals to improve safety by identifying all patients who test positive for the virus, half of whom have no symptoms, according to new research led by Children’s Hospital of Philadelphia (CHOP). The study, which analyzed universal screening procedures at CHOP and two other major children’s hospitals, found that screening patients for COVID-19 allowed hospitals to ensure patients and physicians were not exposed to the virus.

The UIC Innovation in COVID-19 Working Group (ICWG) was organized at UIC to assign resources to and manage COVID-19 medical-related projects.