After a Bad Winter in the Ocean, Female Magellanic Penguins Suffer Most, Study Shows

After a bad winter in the ocean, female Magellanic penguins suffer most, study shows

Newswise — Every autumn in the Southern Hemisphere, Magellanic penguins leave their coastal nesting sites in South America. For adults, their summer task — breeding, or at least trying to — is complete. Newly fledged chicks and adults gradually head out to sea to spend the winter feeding. They won't return to land until spring.

Yet life for these birds when they winter offshore is largely a mystery to the scientists who study Magellanic penguins — and who advocate for their conservation amid declining population numbers.

"The winter period is something of a black box for us in terms of understanding Magellanic penguins," said Ginger Rebstock, a University of Washington research scientist. "We know the least amount about this part of their year."

But research by Rebstock and P. Dee Boersma, a UW professor of biology and founder of the Center for Ecosystem Sentinels, is starting to pry open that black box and discover how Magellanic penguins from one nesting site, Punta Tombo in Argentina, fare during the winter months. In a paper published Aug. 9 in the journal Marine Ecology Progress Series, they report that the Río de la Plata — which drains South America's second-largest river system after the Amazon — strongly influences oceanographic conditions in the Magellanic penguins' winter feeding waters. Those oceanographic features, they report, show up in the body conditions of Magellanic penguin females, but not males, when the penguins return to their nesting grounds in spring.

"Researchers only get to study the penguins up close — monitor their biology, their health, their population numbers — for the one time in the year that they come to nesting sites like Punta Tombo to breed," said Rebstock. "Until now, we have not really known how conditions out in the ocean, where they spend the entire winter, affect them."

Magellanic penguins are believed to swim hundreds of miles in winter to feed on fish such as anchovy and sardines. For penguins originating at Punta Tombo, this could mean swimming more than 1,000 miles north along the coast up to southern Brazil. They generally stay along the continental shelf in waters usually no more than about 650 feet deep.

To understand the oceanographic dynamics in this region, Rebstock turned her attention to space. She analyzed 30 years of weekly sea-surface temperature data, which National Oceanic and Atmospheric Administration satellites collected for those South American coastal waters from 1982 to 2012. Data show that geographic features of coastal South America are responsible for key variations in ocean conditions.

For example, her analysis revealed that the Río de la Plata, which enters the ocean between Argentina and Uruguay, is the primary driver of oceanographic conditions in the penguins' winter feeding waters. The river discharges silt, microbes and nutrients into the ocean as a plume, which disperses in different directions based on prevailing winds. Strong winds from the southwest, for example, can spread the plume north along hundreds of miles of Brazilian coastline. If winds are weaker, the plume stays near the mouth of the Río de la Plata.

Rebstock then analyzed whether variations in these oceanographic features — such as a strong, dispersed plume or a weak, localized plume — were associated with the body condition of penguins at the time of their arrival at Punta Tombo. Boersma and her team have collected information on the health and state of individual penguins when they arrive Punta Tombo for more than three decades. According to their data, the body conditions of male Magellanic penguins weren't correlated with the extent of the plume. But Rebstock found that female penguins arrived back at Punta Tombo earlier, and in healthier body condition, if the Río de la Plata plume was weaker in winter. This may indicate that the plume affects how hard Magellanic penguins must work to find food.

"We believe that the Río de la Plata plume carries a great deal of nutrients into the coastal waters, making them very productive feeding grounds for the penguins," said Rebstock. "But winds will affect where the plume is distributed and how far penguins will have to go to reach it."

A weaker plume may keep the penguins' prey closer together and closer to breeding colonies, increasing an individual penguin's odds of catching fish. Magellanic penguins also are mainly visual hunters. A stronger plume that clings to the coast may obstruct visibility for the birds by making waters more turbid, said Rebstock.

The size and disposition of the plume may affect females more than males because male Magellanic penguins tend to be larger, which allows them to dive deeper. This may give males a slight edge in catching food, especially in difficult conditions, said Rebstock.

"What we would like to do next is test some of these hypotheses by tracking male and female Magellanic penguins during the winter months, to see if they are feeding in the same locations and see how successful they are at obtaining food in different conditions," said Rebstock.

For researchers like Rebstock, that may be the next black box to open. But it will also pose a logistical challenge. Researchers have tried to track Magellanic penguins during winter using satellite tags, but the penguins are very effective at taking them off. 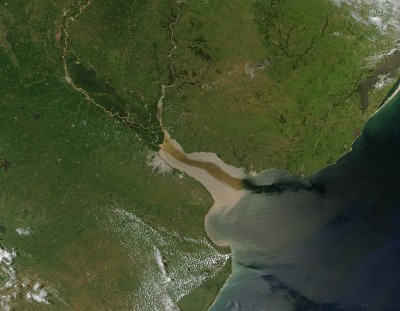 Caption: A 2002 satellite view of the Río de la Plata, which forms at the confluence of the the Paraná River and the Paraguay River. The Río de la Plata drains a basin of more than 1.2 million square miles, the second-largest in South America after the Amazon basin. 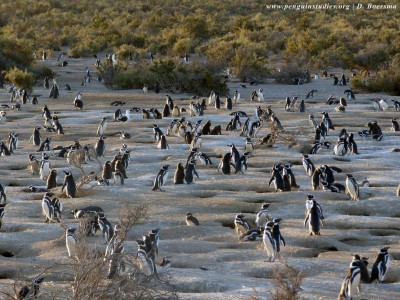 Caption: A summer scene at the Magellanic penguin colony at Punta Tombo in Argentina. 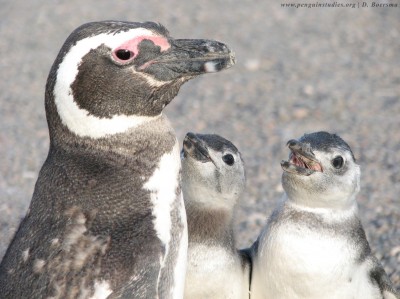 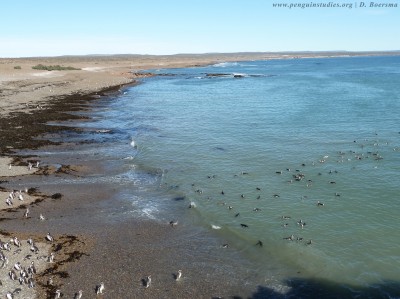 Caption: The Punta Tombo colony in December 2012, at the peak of the South American summer. Most of these penguins spend winter at sea thousands of miles north of Punta Tombo, in waters heavily influenced by the Río de la Plata.