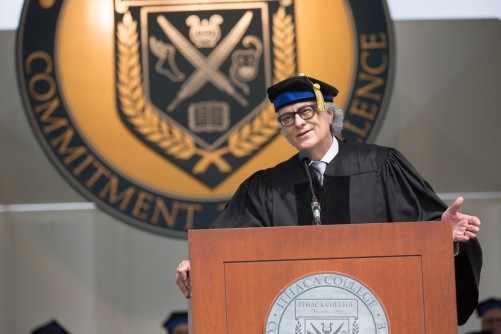 Newswise — Ever the storyteller at heart, the man who helped bring some of popular culture’s favorite and most critically acclaimed narratives to television shared with the Ithaca College Class of 2017 why he always keeps his metaphorical jackhammer at the ready.

Bill D’Elia, a 1969 graduate of Ithaca College with a degree in television-radio from the Roy H. Park School of Communication, has applied his narrative craft, creative vision and social conscience to such shows as “How To Get Away With Murder,” “Boston Legal,” “Glee,” “Grey’s Anatomy,” “The West Wing” and “Northern Exposure” over the past two decades.

The eight-time Emmy Award and four-time Golden Globe nominee delivered the main address at Ithaca College’s 122nd Commencement before 1,360 graduates and their loved ones gathered in Butterfield Stadium.

D’Elia told the graduates that the road before them will start out long and wide. But each decision made will ultimately shorten and constrict their pathways, if they let it.

That’s where the jackhammer comes into play. “Bust up your path,” he added.

D’Elia offered several instances from his career when he’d demolished the road he’d found himself on.

There was the time, as a young professional and father of one, when he quit his job at an advertising agency to start his own company producing TV commercials. Or the time—now as a father of two—he shuttered that very company to pursue filmmaking, an industry in which he had no connections but ultimately led to his foray into producing and directing for the small screen.

He also cautioned the graduates that one of the biggest mistakes they could make was to pick the exact profession they wanted. That immediately narrows the road ahead, he said.

Prior to D’Elia’s address, the procession of graduates entered the stadium and took their seats to a fanfare composed by Class of 2017 member Zach Latino.

This year, honorary degrees were awarded to two individuals dedicated to fostering dialogue meant to bridge divides on difficult issues. Ann Thompson Cook is co-founder of Many Voices: A Black Church Movement for LGBTQ Justice, and has served as president and CEO of the Religious Coalition for Reproductive Choice. La June Montgomery Tabron is president and CEO of the W.K. Kellogg Foundation and has served that organization in various capacities for 30 years. She is dedicated to ensuring that children and families in all communities have the opportunities they need to reach full potential, regardless of race or income.

Rochon, who will retire as president at the end of June, noted that the honorary degree recipients, Cook and Tabron, are wonderful examples of people who identified a need and dedicated themselves to working on it.

He acknowledged that, in the short-term, such lofty questions may run counter to or seem less pressing than where their first post-college paycheck comes from.

“But identifying your core values, then mapping your values onto the challenges in the world, and then acting to meet those challenges will enable you to design a life for yourself that is rich, meaningful and fulfilling in every sense,” he said.

Lucas, the senior class president, reminded the graduates to be appreciative. With that sentiment in mind, the Class of 2017 began a new Commencement tradition this year: Each graduate wore a white stole around their necks that they could customize and decorate prior to the ceremony. The stoles were meant to be presented afterward to someone who made their success in college possible.

“We implemented this idea to highlight the importance of saying ‘Thank you,’ to acknowledge the energy and efforts that each of us has received from at least one person,” Lucas said.

“After all, none of us got here alone.”

Television Commencement Address Commencement 2017 Graduation Speaker How to Get Away with Murder
COMMENTS | COMMENTING POLICY
close
0.72855