The sound of an angry bumblebee

The sound a bumblebee makes when buzz pollinating. 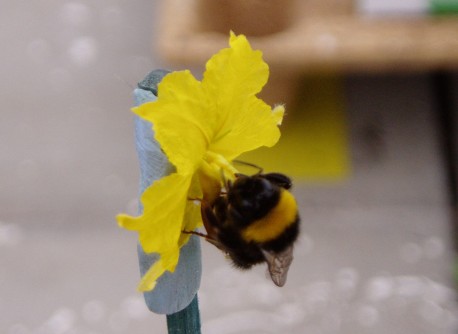 Newswise — ITHACA, NY — Bee pollination is a big deal. Just think about the buzz surrounding colony collapse disorder and the effects it could have on agriculture worldwide. But while honey bees get all the press, there are thousands of other bee species that are just as critical to the continued propagation of flowering plants.

While the loss of these species would no doubt be devastating, research by a biologist at Ithaca College may help lead the way to development of a better bee-simulating — and flower-stimulating — tool to aid in artificial pollination.

Some flowers give up their pollen easily. It can get blown on the wind or picked up on an insect’s body, allowing it to be transferred from the stamen (male part) to the pistil (female part) and resulting in reproduction. But the flowers of potatoes, tomatoes and eggplants, among others, require a lot more than that for the pollen to make its move.

“That’s where buzz pollination comes in,” says Paul De Luca, a lecturer in the Department of Biology at Ithaca College who is an expert on vibrational communication in insects. He is part of a research team that has been listening in on bumblebees, and the sounds they make as they fly from flower to flower collecting pollen, which they bring back to their nest to feed their young.

“Bumblebees will hover over the flower and vibrate their body, which dislodges the pollen from the anther and allows them to scoop it up. Some of that pollen will also rub off onto the pistil as they continue to forage.”

What De Luca has found is that not just any buzz will do the trick. He says it’s almost comical watching a newbie trying to buzz pollinate a flower. After some trial and error, however, bumblebees learn that shaking the pollen loose requires shaking their bodies with just the right frequency, intensity and duration. He and his team have recorded and measured these characteristics in over a thousand individual bees in seven species of the genus Bombus (that’s bumblebee to you and me).

“The buzz they make when pollinating turns out to be a lot different than the sound they make when angry or defensive,” says De Luca. “If they can exert such fine control over the structure of their buzzes, and alter them for different situations, it suggests that they have more flexibility in their behavior than we usually give insects credit for.”

There may be more practical applications for this knowledge as well. In the absence of enough bees or simply to speed things up, some growers resort to hand pollination with a mechanical vibrator—even a simple electric toothbrush can do the job.

But De Luca says there is a lot more seed set and fruit development with the real thing involved, at least for now.

“Knowing what we know about the structure of buzzes, we’ve had some discussions with growers about the possibility of building a more effective and efficient artificial pollinator.”

De Luca hopes to conduct future research on how exposure to pesticides might affect the ability of bees to buzz pollinate, something he says has not yet been studied enough.

“We know pesticides can reduce the foraging effectiveness of bees, but we are also interested in determining whether the specific behavior of buzz pollination is also affected by exposure to pesticides.”

Caption: The sound of an angry bumblebee

Caption: The sound a bumblebee makes when buzz pollinating.