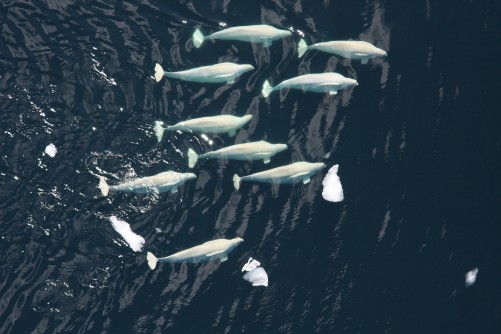 A beluga whale pod in the Chukchi Sea. 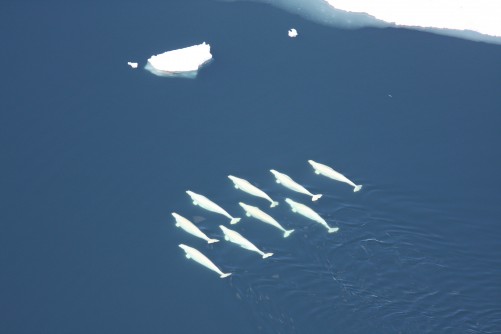 Belugas seen from above in the Chukchi Sea.

Newswise — Reductions in sea ice in the Arctic have a clear impact on animals such as polar bears that rely on frozen surfaces for feeding, mating and migrating. But sea ice loss is changing Arctic habitat and affecting other species in more indirect ways, new research finds.

Beluga whales that spend summers feeding in the Arctic are diving deeper and longer to find food than in earlier years, when sea ice covered more of the ocean for longer periods, according to a new analysis led by University of Washington researchers. The study, published this month in the journal Diversity and Distributions, is one of the first to consider the indirect effects of sea ice loss on Arctic species that dwell near the ice, but don't necessarily depend on it for survival.

"I think this paper is novel in that we're presenting some of the first indirect effects of sea ice loss for an Arctic whale species," said lead author Donna Hauser, a postdoctoral researcher at the UW's Polar Science Center and former doctoral student at the School of Aquatic and Fishery Sciences. "As changes in sea ice affect oceanographic properties, that could be affecting the distribution, abundance or species composition of prey for belugas."

Two genetically distinct beluga populations spend winters in the Bering Sea, then swim north in the early summer as sea ice melts and open water allows them passage into the Beaufort and Chukchi seas. There they feast all summer on fish and invertebrates before traveling back south in the fall. Both populations are considered healthy.

The researchers analyzed migration data collected intermittently from two different periods — referred to in the paper as "early" and "late" — for two beluga populations, covering the years 1993-2002 and 2004-2012. Satellite-linked tags attached to the whales tracked their movements around and away from the high Arctic feeding grounds. Dive-depth data were collected for only one population, the Chukchi belugas, because the other population's tags did not have those capabilities.

Researchers also tracked sea ice cover in the Arctic over these two periods and found that the ice declined substantially from the first to the second period.

"We have documented loss of sea ice and reductions of habitat for Arctic marine mammals across most of the circumpolar Arctic, so this area is not unique," said co-author Kristin Laidre, a UW associate professor in the School of Aquatic and Fishery Sciences and the Polar Science Center. "We’re seeing this ice loss broadly in all areas where belugas occur."

Sea ice loss appears to affect how the Chukchi belugas dove for their food. During the later period, when there was less sea ice, the whales dove significantly longer and deeper than in the earlier period — presumably in search of prey as the animals, in turn, changed their habits because of different ocean conditions brought on by sea ice loss.

Specifically, during the earlier period belugas dove for 20 minutes or longer only once per day, compared to nearly three times a day during the later period. Similarly, their average daily dive depth increased from about 50 meters (164 feet) to 64 meters (210 feet) between the two periods.

The belugas might be diving longer and deeper to follow prey that has dispersed or been driven deeper itself from changing ocean conditions. It's also possible that feeding opportunities are actually better for belugas in an ocean with less sea ice.

"Reduced sea ice cover over a longer period of time over the summer could mean improved foraging for belugas," said Hauser, who is also a researcher at the University of Alaska Fairbanks. "But it's also important to recognize these changes in diving behavior are energetically costly."

It's unclear whether diving changes are positive or negative for belugas, and studies on body condition and health are needed to understand the implications of these changes, she added.

Aside from changes in how belugas dove for food, the nearly two decades of data show that the whales were able to thrive in their summer and fall ocean habitats, despite less ice cover. This adaptability to changes in Arctic conditions speaks to the whales' resiliency, the researchers said.

"Belugas feed on a lot of different prey and use many different habitats, across open water and dense sea ice and everything in between," Hauser said. "Because they are such generalists, that could buffer them under climate change."

Other co-authors are Harry Stern of the UW; Robert Suydam of North Slope Borough in Utqiaġvik, Alaska; and Pierre Richard of Fisheries and Oceans Canada. 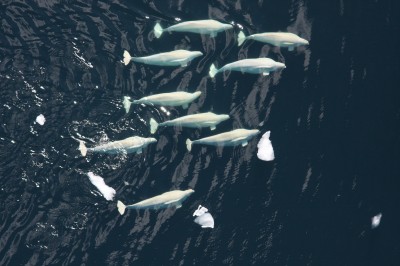 Caption: A beluga whale pod in the Chukchi Sea. 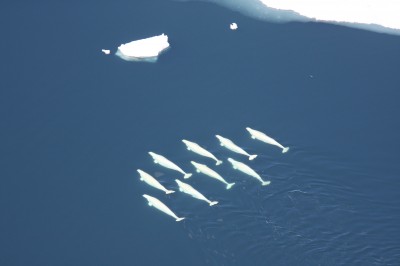 Caption: Belugas seen from above in the Chukchi Sea.