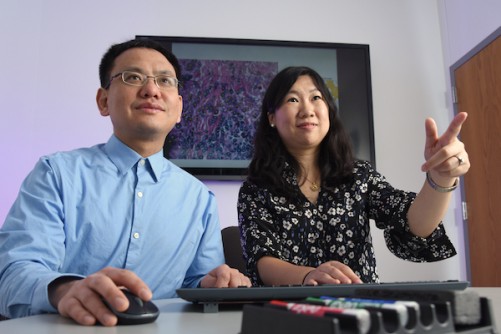 Newswise — DALLAS – March 8, 2017 – After evaluating more than 900 differences in the shape and structure of cancer cells, UT Southwestern Medical Center researchers developed a computer model able to predict the most deadly lung cancers based on a fraction of those features.

“This computational approach should someday make it possible for doctors to tailor the treatment of individual patients based on risk predicted by computer algorithms, for instance choosing to treat patients at higher risk more aggressively,” said Dr. Guanghua “Andy” Xiao, Associate Professor of Clinical Sciences and Bioinformatics and senior author of a study outlining this approach.

The study appears in the March edition of the Journal of Thoracic Oncology.

An algorithm is a sequence of calculations developed to solve a real-world problem. The current algorithms were developed based on scanned images of routine cancer tissue slides used by pathologists to differentiate between malignant and benign tumors.

“This proof-of-concept study demonstrates the feasibility of our approach, although several steps remain before the system could be used clinically,” Dr. Xiao said.

The researchers studied two subtypes of non-small cell lung cancer (NSCLC), the most common cause of lung cancer deaths. Specifically, they studied 3,206 slides containing pathological images of cancer tissue from 523 patients with adenocarcinoma and from 511 patients with squamous cell carcinoma. The slides came from The Cancer Genome Atlas, a scientific resource started more than a decade ago to catalog genetic, image, and clinical aspects of cancers. The atlas is supervised by the National Cancer Institute’s Center for Cancer Genomics and the National Human Genome Research Institute, both funded by the U.S. government.

Dr. Xiao, a member of the Quantitative Biomedical Research Center and the Harold C. Simmons Comprehensive Cancer Center, explained that the pathological examination of cancer tissue slides from individual patients is a routine part of clinical practice for lung cancer diagnosis and prognosis. Currently, a pathologist matches an image slide with his or her memory of certain cancer-related features. This process requires extensive information processing by the human brain as it interprets highly complex pathological images, which not only is time-consuming and subjective, but also can introduce some variation as the pathologist reads the slides.

“Our computerized analysis used a pathological imaging scanner and a desktop computer, so it would be applicable to most clinical settings,” Dr. Xiao said. “The team is exploring the possibility of patenting the process.”

In addition to the form and structure of cancer cells (the morphology), the computer analysis included features of the microenvironment – the tissue surrounding a tumor. The microenvironment is believed to play an essential role in cancer but has been largely overlooked, he added.

The researchers began by developing objective and quantitative computational approaches to measure and analyze differences in the structure and form of the cancer cells and their microenvironment as depicted in the patient images of tissue samples.

After sorting the more than 3,000 slides for features such as cell size, shape, distribution, texture, and location of nuclei, the scientists were able to identify 12 to 18 features – depending on the form of cancer – that could divide the cancers into aggressive and less aggressive groups that they labeled high-risk and low-risk. For both adenocarcinoma and squamous cell carcinoma, patients in the high-risk group had more than twice the risk of death as those identified as low-risk, he said.

“We are encouraged by this study exploring the feasibility of using digital pathological image analysis to identify patients with aggressive lung cancers. However, more research is needed,” Dr. Xiao said.

One challenge is to translate the significant features that the computers identified into the clinical language that pathologists use. Before this computerized image analysis could be used clinically, it would need to be tested in a prospective study evaluating the effects of different image resolutions, specimen sizes, and types of samples, he continued.

“Nevertheless, we can envision a time when such pathology-based image analysis could be integrated with molecular analyses and clinical tests to guide doctors’ decision-making in the age of ‘precision medicine,’ ” he said.

Researchers from UT Arlington, UT M.D. Anderson Cancer Center, and the University of Florida also participated. The research was supported by the National Cancer Institute.