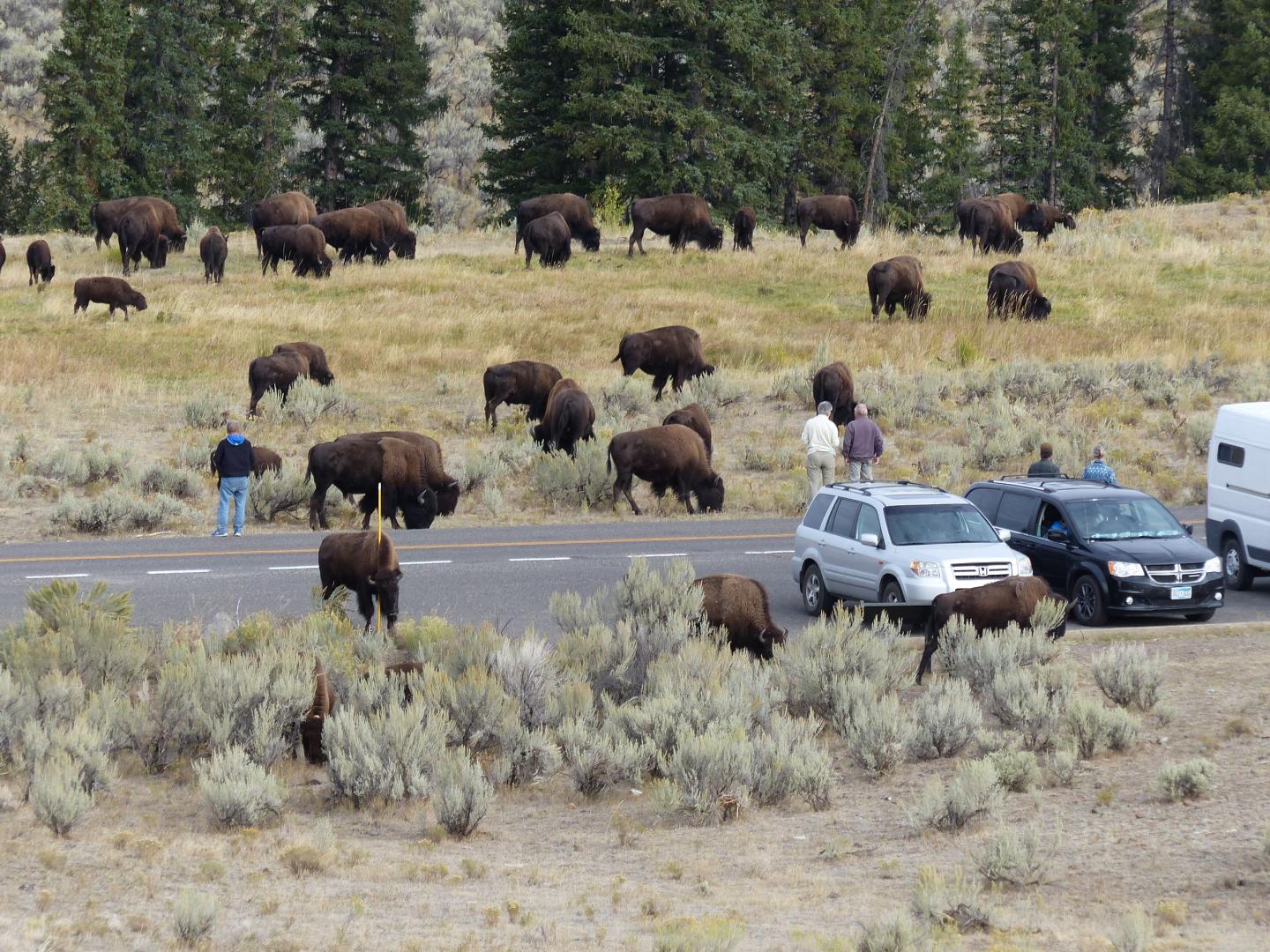 Newswise — CORVALLIS, Ore. - Increasing numbers of bison in Yellowstone National Park in recent years have become a barrier to ecosystem recovery in the iconic Lamar Valley in the northern part of the park, according to a study by Oregon State University scientists.

In the valley, foraging by bison exerts 10 times the environmental pressure of elk, historically the area's dominant herbivore - that's a problem because bison are powerful "ecosystem engineers."

Large numbers of bison disrupt species distribution across shrub steppe and grasslands. They do so via what they eat, trample and rub their horns and bodies on - i.e., tree bark. Thus, bison have tremendous capacity to limit the structure and composition of woody plant communities.

That, in turn, affects the character of riparian plant communities, as well as stream and river channels, altering habitats and food webs for terrestrial and aquatic wildlife species alike.

The findings were recently published in the journal Food Webs.

In the United States, the range of the bison originally ran from east of the Appalachians to west of the Rocky Mountains, with most of them living on their evolutionary home base, the Great Plains.

"The bison population sharply decreased in the 1800s and their distribution became more constricted as European-Americans extended their influences westward across the country," Beschta said.

By the 1830s, there were no bison east of the Mississippi River or on the Snake River Plains. Fifty years later, the Plains bison were close to extinction.

"Several small herds were reported near Yellowstone National Park just before the park's establishment in 1872, perhaps driven there by hunting pressure on the Great Plains," said study co-author Bill Ripple, also of the OSU College of Forestry. "Poaching of bison occurred after park establishment, until 1901, at which time only 22 bison were present in the park."

In 1907, more than 60 bison from a growing herd in the Mammoth Hot Springs area of Yellowstone were transferred to the Lamar Valley. By 1925 the Lamar Valley bison herd had grown to more than 750, necessitating population reduction measures. Culling of the Lamar herd continued for more than four decades.

Meanwhile, National Park Service managers became increasingly concerned about the environmental effects of Rocky Mountain elk in the park's northern range, which includes the Lamar Valley, and began to cull them as well. In the early 1900s both gray wolves and cougars, predators that influenced elk behavior and density, had been extirpated.

In the absence of these predators, combined with hunting prohibitions inside the park, wintering elk populations began to heavily browse young woody plants in the northern range, which led to a decrease in "recruitment" - the growth of seedlings and sprouts into tall saplings and trees - of quaking aspen, cottonwood, willow, thinleaf alder and berry-producing shrubs.

Culling of both elk and bison stopped amid public and congressional concerns in 1968, at which time there were about 4,000 elk and 100 bison in the northern range. Within two decades, those numbers had increased to 20,000 and 1,000.

Cougars returned to the northern range in the 1980s, followed by wolf reintroduction a decade later, thus restoring the park's guild of large predators.

"Changes in elk behavior were observed shortly after the return of wolves" Beschta said. "And, with predation pressure from wolves, cougars and grizzly bears, a degraded winter range, and human hunting of elk that wintered outside the park, annual counts of the northern range elk herd began to decrease from their historical highs in the 1990s."

In the years since wolf reintroduction, the northern range's elk population has declined to about 5,000, with most them wintering outside the park. Bison numbers inside the park, on the other hand, have increased to a historical high of about 4,000.

"But in portions of the northern range, like the Lamar Valley where bison are common, woody vegetation has continued to decline," Ripple said. "We hypothesized that was because of the bison. We also hypothesized that bison, via the suppression of riparian vegetation and trampling of streambanks, may be increasingly influencing the channel of the Lamar River and tributary streams that cross the valley floor."

Photo analysis indicated a near complete loss of willow-dominated riparian communities for at least some parts of the Lamar River and the West Fork of Rose Creek.

"And the roughly 7.5 hectares of aspen stands that were present on the valley floor in 1954 had diminished to one-tenth of a hectare by 2015, representing a 99% loss in the cover of overstory aspen trees," Ripple said. "The rapid increase in bison numbers in recent years suggests the park's large carnivore guild may be incapable of controlling bison populations. And prey switching by wolves - from elk to bison - looks unlikely to provide a stabilizing effect on bison populations."

"However, increased bison numbers over the last two decades appear to have come at a major ecological cost to the biological diversity and functioning of the riparian ecosystems in the Lamar Valley," Beschta said. "Even to a casual observer there are clear indicators of highly altered ecological conditions across the Lamar Valley, including a high density of bison trails, wallows and scat. High bison numbers have been an effective agent for accelerating the biological and physical modification of the valley's seeps, wetlands, floodplains, riparian areas and channels, trends that had begun decades earlier by elk."

Ecosystem simplification - a loss of biodiversity, landscape complexity and ecological integrity - is well underway, much like as is associated with high levels of domestic livestock use in areas of the mountain west, Beschta added.

"The ongoing environmental effects of bison would have to be significantly reduced in order to restore biologically diverse communities dominated by willows, cottonwoods and aspen," Beschta said. "As park administrators make management decisions that affect ungulate densities and distributions in Yellowstone, as well as those in other parks and reserves with high ungulate densities, our findings indicate a need to take into account the often wide range of ecological effects that abundant large herbivores can have on terrestrial and aquatic ecosystems."

The Ecosystem Restoration Research Fund and the National Science Foundation supported this research. J. Boone Kauffman and Luke E. Painter of the OSU Department of Fisheries and Wildlife were coauthors on the study.