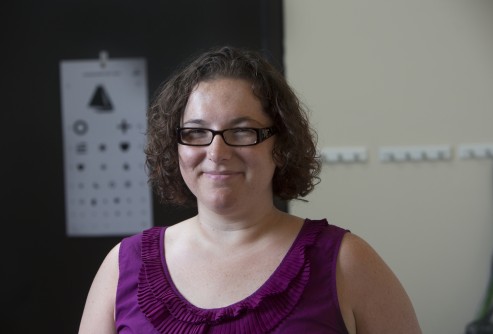 Sarah Laszlo is an associate professor of psychology at Binghamton University, State University of New York.

Newswise — BINGHAMTON, NY – By measuring brainwaves, it is possible to predict what a child’s reading level will be years in advance, according to research from Binghamton University, State University of New York. Binghamton University researchers Sarah Laszlo and Mallory Stites measured the brain activity of children and then compared it to their report cards, their vocabulary and other signs of reading success two years later, as part of the National Science Foundation-funded Reading Brain Project. Laszlo and Stites used event-related potentials (ERPs) to determine that brain activity was different in children who showed reading success in later years than in children that did not.

“Your brain is what allows you to do everything, from math to designing buildings to making art,” said Laszlo, associate professor of psychology at Binghamton University. “If we look at what the brain is doing during reading, it is a really good predictor of how reading will develop.”

The children read a list of words silently to themselves. Every so often they would come across their own name to make sure they were understanding the text and paying attention. Children that had better report cards tended to show different patterns of activity during both phonological (sound) and semantic (meaning) processing..

“Phonological processing is the ability to sound things out and semantic processing is knowing what words mean,” said Laszlo. “Like being able to link the word fish with a slimy creature that swims underwater.”

Other factors were included when measuring the reading success of students, such as their teachers, their parents’ encouragement, their age and the amount that they read at home.

“The thing that is really valuable about this is that once kids starting having trouble with reading, they start needing extra help, which can be hard and stigmatizing for the child and often not effective,” said Laszlo. “By using long-range predictions about success, we can give them the extra help they need before they fall behind.”

The team is currently working on a paper to record the findings from the first four years of this research. At the end of the fifth year, Laszlo and her team will look back to see what predictions can be made regarding ERP’s and reading progress.

The paper, “Time will tell: A longitudinal investigation of brain-behavior relationships during reading development,” was published in Psychophysiology.