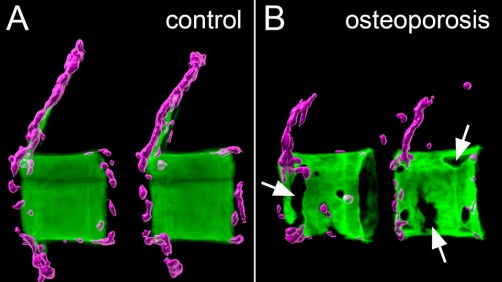 Newswise — A research team from the National University of Singapore (NUS) has identified a new avenue to maintain bone health while reducing bone resorption. The work, led by Associate Professor Christoph Winkler from the Department of Biological Sciences at the NUS Faculty of Science, opens up new and potentially more effective osteoporosis treatments.

Osteoporosis is the most common age-related bone disease worldwide. It is estimated that one in three women and one in five men aged over 50 suffer from osteoporotic bone fractures. In ageing populations, the incidence of hip fractures increases dramatically, resulting in a high risk of morbidity and mortality. As such, osteoporosis is an immediate and significant health concern in Singapore and worldwide.

To develop new strategies to treat osteoporosis, the NUS team, which also comprised Dr Phan Quang Tien and Dr Tan Wen Hui from the NUS Department of Biological Sciences, collaborated with research groups from the Genome Institute Singapore and the University of Wuerzburg. They used genetic analysis to discover a connection between a small protein, chemokine CXCL9, and the important part it plays in maintaining healthy bones. They also identified two inhibitors as promising drug targets for osteoporosis.

This pioneering work was published in the journal Proceedings of the National Academy of Sciences (PNAS) on 27 July 2020.

The role of a small protein in osteoporosis

Both CXCL9 and its receptor CXCR3 have long been known to modulate the migration of immune cells to inflammation sites, for example in psoriasis and rheumatoid arthritis. Their role in osteoporosis and recruitment of bone cells, however, is unknown. The small-molecule inhibitors AMG-487 and NBI-74330 were known to block CXCR3 activity but have had little success in earlier clinical tests for the treatment of psoriasis. The research team now showed that these inhibitors are highly effective in blocking osteoclast recruitment and protecting bone from osteoporotic effects.

Most current osteoporosis therapies include the use of bisphosphonates, which block osteoclast activity and thus prevent excessive bone resorption. However, prolonged treatment with these drugs eliminates the necessary bone turnover leading to increased fracture risk and other unwanted side effects. Therefore, there is an urgent need to develop new strategies that overcome the limitations of current treatments.

“Based on our studies, both AMG-487 and NBI-74330 lowered the number of formed osteoclasts by more than 50 per cent when administered at the efficient dosage. While these two inhibitors have been tested in preclinical and clinical trials, they have not been used as targets for osteoporosis. We propose that the two small-molecule antagonists can be used to modulate or adjust excessive osteoclast numbers in osteoporosis patients in a dose-dependent fashion,” said Assoc Prof Winkler.

He added, “Our new strategy has major advantages as excessive bone resorption can be prevented in a targeted manner but normal bone turn-over will still continue. This offers potential to avoid increased fracture risks in osteoporosis patients and to maintain healthy bone for improved quality of life.”