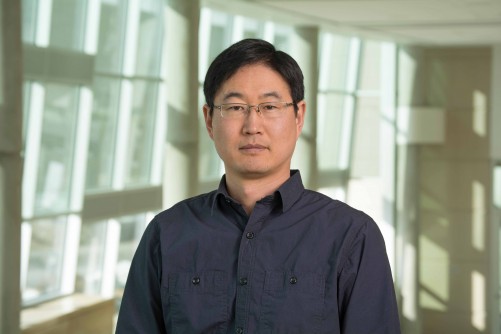 Newswise — A breakthrough in finding the mechanism and a possible therapeutic fix for autism and intellectual disability has been made by a University of Nebraska Medical Center researcher and his team at the Munroe-Meyer Institute (MMI).

Woo-Yang Kim, Ph.D., associate professor, developmental neuroscience, led a team of researchers from UNMC and Creighton University into a deeper exploration of a genetic mutation that reduces the function of certain neurons in the brain.

Dr. Kim’s findings were published in this week’s online issue of Nature Neuroscience.

“This is an exciting development because we have identified the pathological mechanism for a certain type of autism and intellectual disability,” Dr. Kim said.

Recent studies have shown that the disorder occurs when a first-time mutation causes only one copy of the human AT-rich interactive domain 1B (ARID1B) gene to remain functional, but it was unknown how it led to abnormal cognitive and social behaviors.

Autism spectrum disorder (ASD) impairs the ability of individuals to communicate and interact with others. About 75 percent of individuals with ASD also have intellectual disability, which is characterized by significant limitations in cognitive functions and adaptive behaviors.

There are no drugs or genetic treatments to prevent ASD or intellectual disability; the only treatment options focus on behavioral management and educational and physical therapies.

The team created and analyzed a genetically modified mouse and found that a mutated Arid1b gene impairs GABA neurons, the 'downer' neurotransmitter, leading to an imbalance of communication in the brain.

GABA blocks impulses between nerve cells in the brain. Low levels of GABA may be linked to anxiety or mood disorders, epilepsy and chronic pain. It counters glutamate (the upper neurotransmitter), as the two mediate brain activation in a Yin and Yang manner. People take GABA supplements for anxiety.

“In normal behavior, the brain is balanced between excitation and inhibition,” Dr. Kim said. “But when the inhibition is decreased, the balance is broken and the brain becomes more excited causing abnormal behavior.

“We showed that cognitive and social deficits induced by an Arid1b mutation in mice are reversed by pharmacological treatment with a GABA receptor modulating drug. And, now we have a designer mouse that can be used for future studies.”

Next steps for Dr. Kim and his team are to even further refine the specific mechanism for autism and intellectual disability and to identify which of the many GABA neurons are specifically involved.